NEW DELHI — Ana Pautler, a trekker from San Francisco, was partway up a Himalayan mountain trail in Nepal when she noticed something peculiar: People were turning around.

As fears of the coronavirus spread around the world, German hikers told Ms. Pautler on March 17 that their embassy had advised them to return to Kathmandu, the capital, and was discussing flying people out. Israeli tourists were doing the same thing, she said, spurred on by messages to leave.

But Ms. Pautler, 32, who has been living in China, received no such alert from the State Department’s travel advisory system until March 23, though she was signed up for regular updates.

By that point, Nepal’s international airspace had already been closed for a day, following similar shutdowns all over the world, and her flight out had been canceled.

“Other embassies seemed to be giving more information,” Ms. Pautler said in a telephone interview from Kathmandu, where she is waiting out a nationwide lockdown that will last until at least mid-April. “The U.S. Embassy wasn’t really saying anything.”

While the United States struggles with surging cases of the coronavirus and life-or-death decisions in a fast imploding health care system, citizens stranded thousands of miles away fear that they may be left behind.

A State Department spokesperson wrote in an email that personnel were “working tirelessly to identify transportation options for U.S. citizens seeking to return to the United States.” The State Department did not answer a question about why Americans in Nepal were notified of complications returning home later than other nations.

As coronavirus cases reached one million worldwide, Americans on three continents said in interviews that government repatriation efforts had seemed slower and less certain than those of other countries, pointing to embassy social media posts and emails through the STEP program, which provides travel updates to citizens abroad.

In India, American beachgoers in Goa, where many shops have closed from a 21-day lockdown, said they were rationing food as other countries loaded their citizens onto buses bound for the airport.

In Ghana, Halima Mahdee, 40, a student from California, said she was furious about not having been evacuated weeks ago, when South Korean and Chinese students were sent home from her study abroad program in Accra, the capital.

In Peru, hundreds of Americans are still trapped, and activists warned that a humanitarian crisis was unfolding as tourists reported being forcibly evicted from hotels and unable to find medicine for critical health conditions. 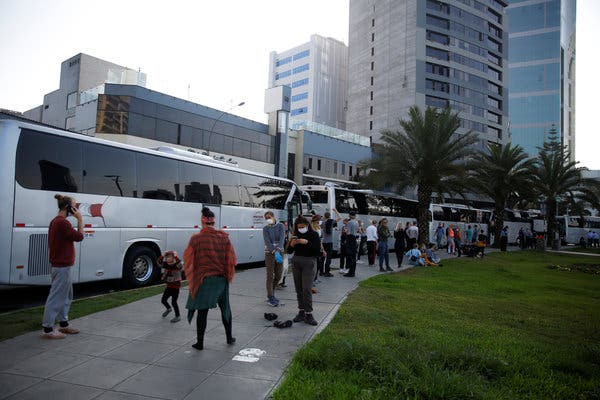 Citizens of Scandinavian nations waiting in Lima, Peru, on Thursday to be bused to a repatriation flight bound for Denmark.Credit…Reuters

Diane Gallina, 68, from Long Island, N.Y., was frantically worried about her daughter, who she said was holed up alone in a hotel in Lima and feeling despondent.

“She told me the Canadians got out,” she said through sobs. “How come Canada can get their people out?”

Some tourists pointed out that communication had been far smoother with the embassy once it became clear that the United States was also going into lockdown mode. Parts of Europe, for instance, were initially reporting higher cases of the coronavirus than the United States, a possible reason for why they urged citizens to leave Nepal days earlier.

The extraordinary challenge of evacuating Americans from far-flung corners of the world at the same time has overwhelmed diplomats.

Last week, the United States Embassy in Kathmandu started posting regular updates on Facebook and organizing buses and flights to reach people in mountain towns, including those near Mount Everest base camp.
Sign up to receive our daily Coronavirus Briefing, an informed guide with the latest developments and expert advice.

But even as those messages were distributed among tourists, senior officials in Washington seemed unaware of the specifics.

Asked at a news briefing on March 27 about the situation in Nepal, particularly for Americans stranded on trails leading to Mount Everest, Ian Brownlee, the State Department’s principal deputy assistant secretary in the consular affairs bureau, told a reporter he would have to get back to her. 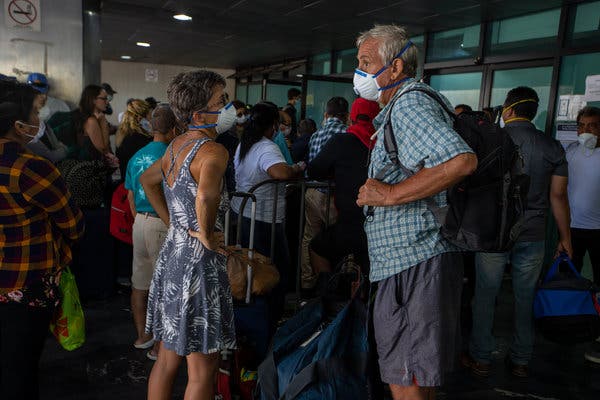 Embassies have faced daunting logistics coordinating with local government officials who are focused on protecting their own citizens. Even reaching tourists in countries like Nepal has been complicated: Some popular trails are accessible only by chartering tiny planes that hold a dozen people.

At a Tuesday news briefing, President Trump said the evacuations were some of the “largest and most complex” in American history. He said the State Department had rescued more than 25,000 Americans from more than 50 countries.

“Almost everybody’s out now,” Mr. Trump said, referring to those in Peru and Brazil.

But in Nepal, hundreds are still stuck.

On March 17, as stringent lockdowns started rippling around the world, the German Embassy warned citizens of flight disruptions on their Facebook page and urged them to contact their airlines. Over the next week and a half, Germany and France organized flights to take out hundreds of people, including citizens of Finland, Austria, Denmark and Belgium.

As Europeans were receiving early warnings to leave, John Arns, 47, who lives in the San Francisco Bay Area, tried to get information about what the American government was doing. But all he could find on the embassy’s Facebook page was information about proper hand-washing techniques and Women’s History Month.

“I am incredibly disappointed with the embassy’s response,” he said.

Some Americans stuck in Nepal said they were being pointed out and called “corona” when they stepped outside of their hostels. The perception among some South Asians is that foreigners are responsible for importing the virus; Nepal has just six confirmed cases, including one person who has recovered.

“The Nepalis here are afraid of us,” said Stacy Kim, 58, from Santa Cruz, Calif., who was stranded in a remote town near the country’s border with India. “When we try to buy food they are scared we are exposing them to the virus and try to get us to go away.”

Even in Kathmandu, tourists said they were worried about the logistics of something as basic as reaching the airport. The police have threatened people on the streets.

Raj Gyawali, who is part of a government crisis committee helping tourists during the lockdown, said the Europeans — except for the British — had been highly proactive in getting their citizens out.

“To speak frankly, they seemed so organized,” he said.

“I don’t know why they are delaying,” he said.

It was not until March 26 that the State Department issued its first notice about a possible evacuation flight. Five days later, 302 Americans left Nepal for Washington.

In a video message, the ambassador, Randy Berry, said the flight was the result of “hundreds of hours of coordination and cooperation.”

At a Tuesday news briefing, Secretary of State Mike Pompeo urged Americans “to work your way back here,” saying he could not guarantee “the U.S. government’s ability to arrange charter flights indefinitely where commercial options no longer exist.”

But as Americans have watched medical personnel load bodies onto refrigerated trucks and the United States reports more cases than anywhere else in the world, some are having second thoughts about trying to leave on another evacuation flight.

Amy Sellmyer, 34, from Oklahoma, who has worked in Nepal and built a life there, felt she was better off staying put.