As the number of postive COVID-19 cases in the United States continues to climb, states are struggling to get the assistance they need from the federal government. Jared Kusher, the failed real-estate developer President Trump has entrusted to coordinate much of government’s response to the pandemic, isn’t helping. During a press briefing on Thursday, the son-in-law-in-chief argued that the Strategic National Stockpile, which contains a cache emergency medical supplies, is not meant for the use of states.

This makes no sense, obviously, and journalists quickly pointed out that the stockpile’s own website makes clear that its contents are indeed for state use. The backlash presented an obvious solution for the Trump administration: edit the website to align with Kushner’s comments. As journalist Laura Bassett pointed out on Twitter, the official description of the stockpile was amended Friday morning, with before-and-after screenshots indicating that a paragraph about how the stockpile is meant for when “state, local, tribal, and territorial responders request federal assistance to support their response efforts” had been deleted.

This is what the website for the federal stockpile said yesterday vs what it says today, after Kushner was caught lying about how states aren’t supposed to be using it. It was changed to say, “Many states have products stockpiled, as well.” https://www.phe.gov/about/sns/pages/default.aspx …

The Department of Health and Human Services, which manages the stockpile, denied the description was edited in response to Kushner’s comments. “This is language we have been using in our messaging for weeks now,” HHS spokesperson Katherine McKeogh said in a statement provided to Politico, adding that the Office of the Assistant Secretary for Preparedness and Response “first began working to update the text a week ago to more clearly explain to state and local agencies and members of the public the role of the [Strategic National Stockpile].”
The stockpile has been a subject of debate as hospitals around the country are running low on equipment necessary to treat COVID-19 patients, most notably breathing ventilators. Trump has insisted the federal government has provided states with all they need to combat the pandemic, while accusing some governors of being ungrateful.

“Massive amounts of medical supplies, even hospitals and medical centers, are being delivered directly to states and hospitals by the Federal Government,” the president tweeted Thursday morning. “Some have insatiable appetites & are never satisfied (politics?). Remember, we are a backup for them. The complainers should have been stocked up and ready long before this crisis hit. Other states are thrilled with the job we have done. Sending many Ventilators today, with thousands being built. 51 large cargo planes coming in with medical supplies. Prefer sending directly to hospitals.

During a press briefing that night, Kushner echoed Trump’s belief that states should stop asking for federal assistance. “The notion of the federal stockpile was it’s supposed to be our stockpile,” he said. “It’s not supposed to be states’ stockpiles that they then use. So we’re encouraging the states to make sure that they’re assessing the needs, they’re getting the data from their local situations, and then trying to fill it with the supplies that we’ve given them.” 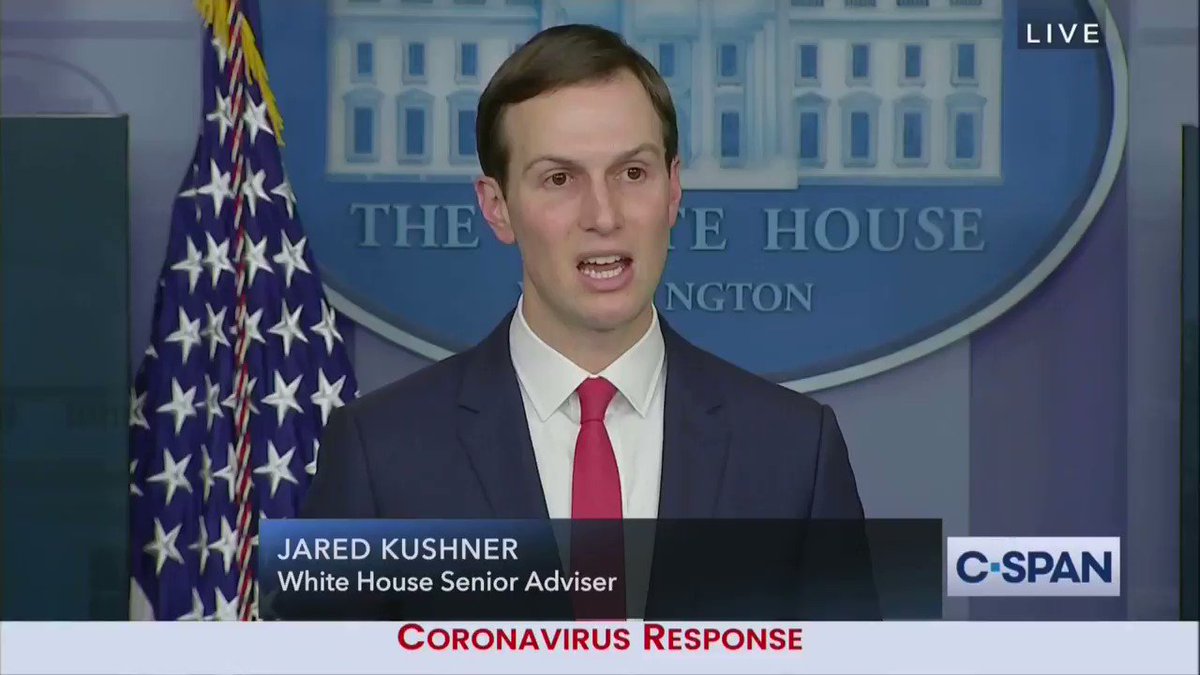 Kusher’s comments are emblematic of the general confusion surrounding the flow of equipment from the federal government to the states that need it most. Adding to that confusion is the fact that the government is not sending some supplies directly to states, but to commercial entities who then auction them off to the highest bidder.

When Rear Admiral John Polowczyk was asked on Thursday asked about personal protective equipment going to the private sector rather than state governments, his response was typical of the Trump administration.

“That’s normally how things work, right?” he said. “I’m not here to disrupt a supply chain.”