“Everything happened so fast for me.” Songwriter John Prine said this in one of many late-life interviews, when the glow of sunset warmed his disfigured grin, itself a map of battles fought and deep, wry knowledge. He had survived throat cancer and lung cancer to produce an album called “The Tree of Forgiveness.” But whatever there was to forgive, it paled beside what there was to celebrate.

For Prine, that started with the blinding flash at the beginning of his career. In 1970, he was a working-class guy, fresh from the Army and lugging the mail in Maywood, Ill. He wrote songs in his head as he walked, and sang them for free at open mic night at a folk club in Chicago. Word got around. Open mic night turned into a regular gig. And there he was on a Friday night in October when a young movie critic named Roger Ebert walked in for a drink and walked out with a rave review.

“Singing Mailman Who Delivers a Powerful Message in a Few Words” was the headline on Ebert’s review. It wouldn’t be a bad headline for Prine’s obituary almost 50 years later, upon his death at 73 from covid-19-related pneumonia. His unassuming, almost bashful, personality; the overwhelming humanity of his songs; the skillful economy of his writing — it was all there from start, and stayed with him to the finish.

“Things just got better from then on,” Prine once told an interviewer. Within a year of that first review, Prine had dazzled the crown prince of Nashville songwriters, Kris Kristofferson, and caught the ear of the king himself, Bob Dylan, who stirred from his reclusion to back up Prine on harmonica. Prine had hit-machine Paul Anka for a manager and a first-album deal with Atlantic Records. That first record landed, not on the charts, but in the Americana music history books: an instant classic, the rare debut that, in the words of “Rolling Stone,” feels “like a greatest-hits compilation.”

“Twenty-four years old and writes like he’s two hundred and twenty,” Kristofferson wrote in the liner notes. There was a lot of truth in that. Prine wrote as if he had already lived many lives in many souls. “I am an old woman, named after my mother,” he declared in “Angel From Montgomery.” “Me and Loretta, we don’t talk much more,” said one half of a lonely old couple in “Hello in There.” And in “Sam Stone,” he channeled both the morphine-addicted war veteran of the title and Stone’s neglected kids, seeing all and missing nothing: “There’s a hole in Daddy’s arm where the money goes.”

That was probably Prine’s most famous line. Indeed, the hole in Daddy’s arm was such an arresting image, so plainly stated, that Prine became a voice of the anti-Vietnam movement without really trying. It was another one of those things that happened so fast.

Some artists are searingly witty; their cleverness electrifies; they hit just the right word and elicit a gasp or a laugh or both. Some artists are achingly sincere; they see and feel more than the rest of us and follow their revelations with utter faithfulness. Prine was both at the same time — among the rarest of artistic aptitudes. The line about Daddy’s arm was both joltingly clever and utterly sincere. Prine held these competing values in equipoise throughout his long career, and the perfect balance was so powerful that of course the world discovered him quickly. Such a genial, humane genius is difficult to miss.

But having launched, Prine soon ditched what his fellow songwriter Joni Mitchell called “the star maker machinery / Behind the popular song.” For the rest of his long career, he put out most of his music on his own label, taking out bank loans to cover the recording costs and recouping his investments one fan at a time. Some of his steadiest paychecks came from other singers covering his songs — from Johnny Cash to Bonnie Raitt to Bette Midler to Sturgill Simpson. We could make this paragraph as long as we want with names of great singers, but what’s most important is not their number so much as their range.

His own audiences were bigger at the end than they had ever been. Prine sold out Radio City Music Hall. He sang duets with Stephen Colbert. He was inducted into the Songwriters Hall of Fame and earned a Lifetime Achievement Award from the Grammys to go with his two earlier Grammy Awards. “The Tree of Forgiveness” reached No. 5 on the Billboard album charts.

Having survived two bouts of cancer and a dozen years of creative silence, Prine channeled his own life and plumbed his own soul in that final album. Talking to Terry Gross of radio’s “Fresh Air” last year, the artist was overt about its personal qualities. “Just another simple John Prine patented melody,” he said of “Summer End,” a haunting beauty that observes: “You never know how far from home you’re feeling / Until you watch the shadows cross the ceiling.” Fully himself, fully aware, fully comfortable in his creative skin.

“I just John-Prined the song up,” he told Gross of another gem, called “Boundless Love.” Some lyrics he had worked on years earlier were sitting in his files, needing something. Something witty, yet sincere. He wrote: “Sometimes my old heart is like a washing machine. / It bounces around til my soul comes clean. / And when I’m clean and hung out to dry, / I’m gonna make you laugh until you cry.”

Or cry until we laugh. Or laugh and cry simultaneously. That was the essence of John-Prining it up. There will be a lot of both, the laughing and the crying, among the many fans of John Prine, in celebrating and mourning a rare poet of American song. 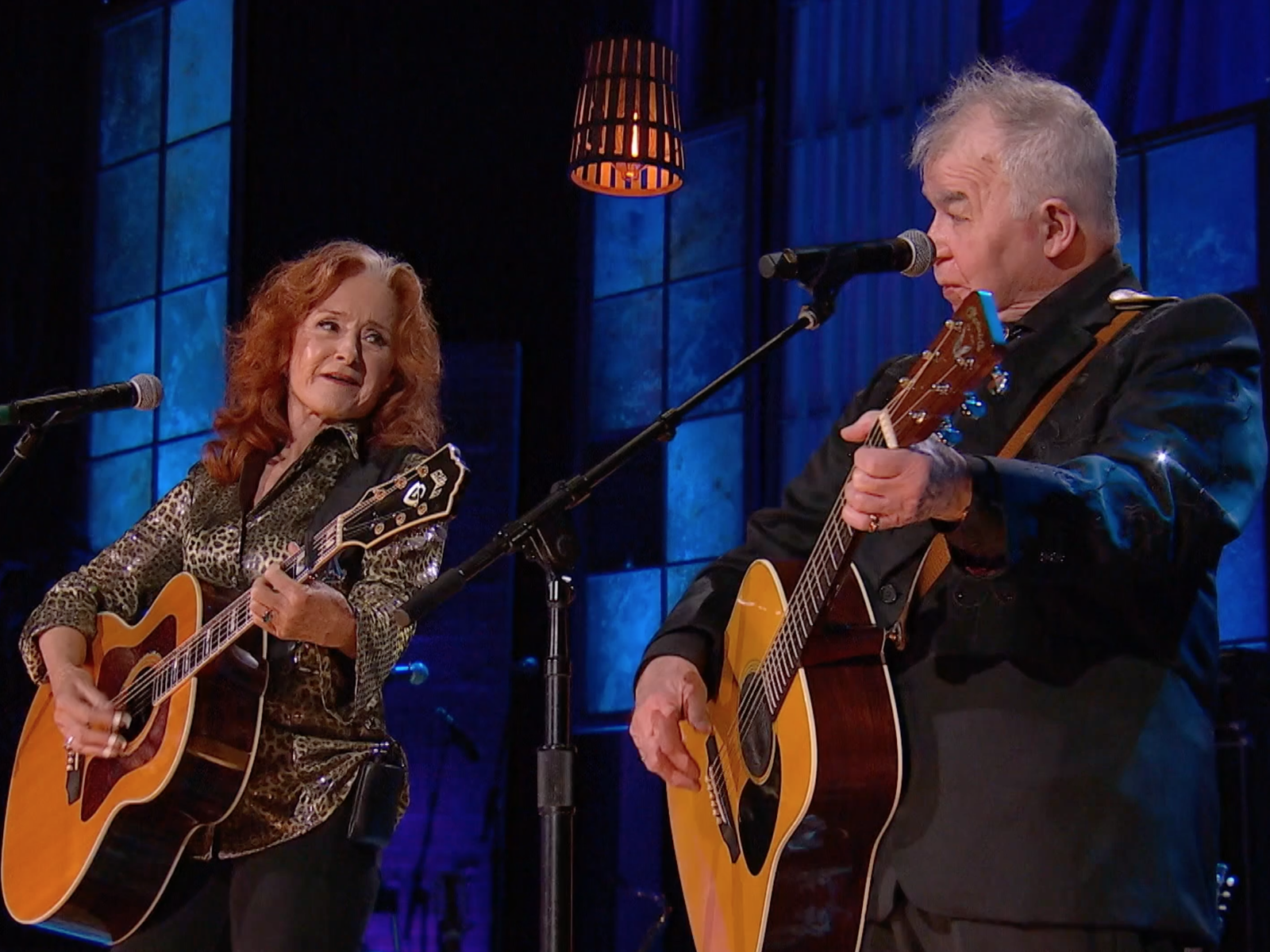 John Prine’s 2019 performance of “Angel from Montgomery” alongside Bonnie Raitt was one of the late Americana pioneer’s iconic, genre-defining moments at the event.

Courtesy of the Americana Music Association

John Prine, who died Tuesday from complications of COVID-19, was a foundational figure, guiding light and embodying spirit of Americana music. In recent years his presence at the annual Americana Music Honors and Awards, held every September at Nashville’s hallowed Ryman Auditorium, defined that event. Jed Hilly, Executive Director of the Americana Music Association, reflected upon Prine’s passing:

When John Prine became ill with the virus that would take his life, I was asked to write about why the man is important. I don’t have that way with words. His impact is so deep, and not just to those of us who know him. A few years ago, as John walked on stage unannounced to present an award at the Ryman, the crowd rose to its feet, not allowing him to speak. As the applause died down John stepped up to the podium and said, amused, “I was gonna come out and tell you who I was.” John Prine was a hero — truly an American treasure. He was our pied piper, our revered monk, our soothsayer. What John said, went. He had this magical way of making everyone around him feel special, whether you knew him personally or not. He could share his extraordinary being on such a personal level that fans felt like they knew him. He was their friend, their personal special find, their treasure. Knowing him has been an honor of my lifetime. He was the most humble, kind, funny and real soul on the planet.