His wife, Fiona, son Jody, and others remember a big-hearted genius who championed new artists and made the most of the small things in life

Prine at home in 2016, David McClister

John Prine’s 50-year career had taken him from the folk clubs of Chicago to sold-out venues in London, Australia, and beyond. But as he planned the schedule for the final leg of his Tree of Forgiveness tour, there was still one place he needed to play: Paris.

The city had never seemed to care for Prine. His down-to-earth folk songs had spread to Ireland, England, and even Scandinavia. But a promoter told his touring manager Mitchell Drosin that there was no point in booking his first-ever show in France; Prine would lose money if he brought his band. “John said, ‘You don’t understand. I want to play Paris, and I want to stay at the George V,’ which is one of the most expensive hotels in the world,” says Drosin. “It’s a Four Seasons, it’s insane. I said, ‘You know, your hotel is more than you’re going to get paid. It’s just going to be a club show. John said, ‘That’s great.’”

Drosin booked a show at Paris’ 500-capacity Café de La Danse, much smaller than the other venues on the tour. Prine loved Paris in ways that even Fiona, his wife and manager, struggled to explain. “He always loved that [Parisians] treated him with disdain, you know?” she says. “He just loved the people and the food and the idea he couldn’t understand a word they were saying. He didn’t have much of an ego.”

At the show, on February 13th, Prine was in serious pain from what he later learned was a collapsed hip. He was forced to sit in a chair onstage, something he never did. But he delivered, blasting through one of the most distinct catalogs in American popular music. There was 1971’s “Six O’Clock News,” the stunning story of a man who learns his family history was a lie and kills himself; “Angel From Montgomery,” his classic about the sadness of a suburban 1950s housewife; and 2018’s “Summer’s End,” a ballad he had dedicated to people suffering from America’s opioid crisis.

Prine invited Fiona and some visiting family members onstage to sing along to “Paradise,” a 1971 song about the devastation of the Kentucky coal-mining town where his parents met; in recent years, it had become an environmental anthem. Prine joked about his immobility, saying, “OK, now we’re coming to the encore,” because he couldn’t easily leave the stage. Prine’s sound engineer Andy Primus says Prine was “giddy,” telling more stories than usual: “People were sitting on the stairs and hanging over the railings, it felt like he was playing in your living room. Prine was feeding off the vibe and just having a blast.”

“He might as well have danced off the stage,” says Fiona. “He was so proud that he did that show, and it was sold out and they loved him. It felt like a victory lap.”

The entire tour had felt like a victory lap, in fact. Prine’s most recent album, 2018’s The Tree of Forgiveness, was his first LP of new material in 13 years, proving that even in his seventies he could write just as deeply as ever. For a half-century, Prine had covered subjects few others touched — the loneliness of the elderly, serial murders, a monkey lost in space — in songs that mixed deceptive simplicity with sharp storytelling and a touch of the surreal. Artists like Bob Dylan and Bonnie Raitt had long been huge fans. But in the 2010s, Prine had become something of a national treasure. His songs had become a key reference point for a new generation of songwriters. Dan Auerbach, Jason Isbell, and Amanda Shires lost money on the road so that they could open for him. Kacey Musgraves wrote a song where she fantasized about smoking a joint with him. Prine won lifetime achievement awards from the Grammys and the Americana Music Association. (“I’m getting Americana lifetime achievement awards, and I never knew what Americana was,” he said. “But let ’em call me what they want, as long as they call me.”) He was excited to keep it going. By the time he went to Europe this year, he had written a half-dozen songs for his next album and started work on an autobiography.

After the Paris show, Prine celebrated with a French cheese platter (he usually opted for $12 deli trays). His hip pain was so bad that he decided to cancel the rest of the tour, but before returning home, he and Fiona hung out in Paris for a few more days. They ordered room service every day, drank expensive wine, and watched movies like Joker. “I went out shopping on the last day we were there, and I bought him a whole bunch of gifts,” she says. “I just wanted to buy him gifts, because he always bought me gifts and he couldn’t go shopping because he couldn’t walk so well. I bought him a new ring that I’m wearing now. I bought him glasses. I just felt really tender towards him.” Prine had had a series of health problems, dating back to the cancer he beat in the late Nineties. “Part of me knew that maybe I wasn’t going to have a whole lot of time left,” Fiona says. “But I believed we’d have a couple of more years.”

Prine and Fiona flew home to Nashville, where Prine had successful emergency hip surgery. But in the days that followed, he developed a cough, which he assumed was related to his COPD. Since he’d been traveling overseas, a doctor tested him for COVID-19. As Fiona was walking out the door, the doctor suggested she get tested too. A couple of days later, they stood in their home, the doctor on speakerphone, listening to the results. John’s result was “indeterminate”; Fiona’s was positive. “I literally almost fainted,” she says.

She self-quarantined, leaving the house for a few days to stay somewhere else. While her case was mild, “it was like nothing I’d ever had before,” she says. “I would not compare it to the flu or a cold.”

At first, Prine seemed to be doing OK. He kept up with his physical-therapy exercises and stayed glued to the news; he had a habit of taping and watching all three network broadcasts each night. “He felt sorry for America,” says Fiona. “That it had come to this: that the political distancing was now a physical distancing. He would tell me about how when he was a kid, nobody cared whether you were a Democrat or a Republican. It was the last thing you thought about when you were at school or you were with your friends. It broke his heart that his country became this divided.”

Fiona returned home after getting cleared by the health department. She and John needed to stay separated, so she would talk to him from the top of the stairs. “He would tell me, ‘Yeah, I’m doing fine,’” she says. “Then one day when I asked him how he was doing, he said, ‘I’m just exhausted. I can’t stay awake.’”

The day she was cleared to stop quarantining, Fiona took Prine straight to the Vanderbilt University Medical Center, where his condition worsened. Two days after arriving, he was put on a ventilator. Because Fiona had had coronavirus and was likely immune, doctors allowed her to sit with John in the ICU. “I talked to him for 14, 15 hours a day and played music, played him other people doing his songs, played messages from all the kids and from his brothers and my family,” she says. “I told him things that I wanted to tell him. He couldn’t communicate with me, but I just assumed that he could hear me.” 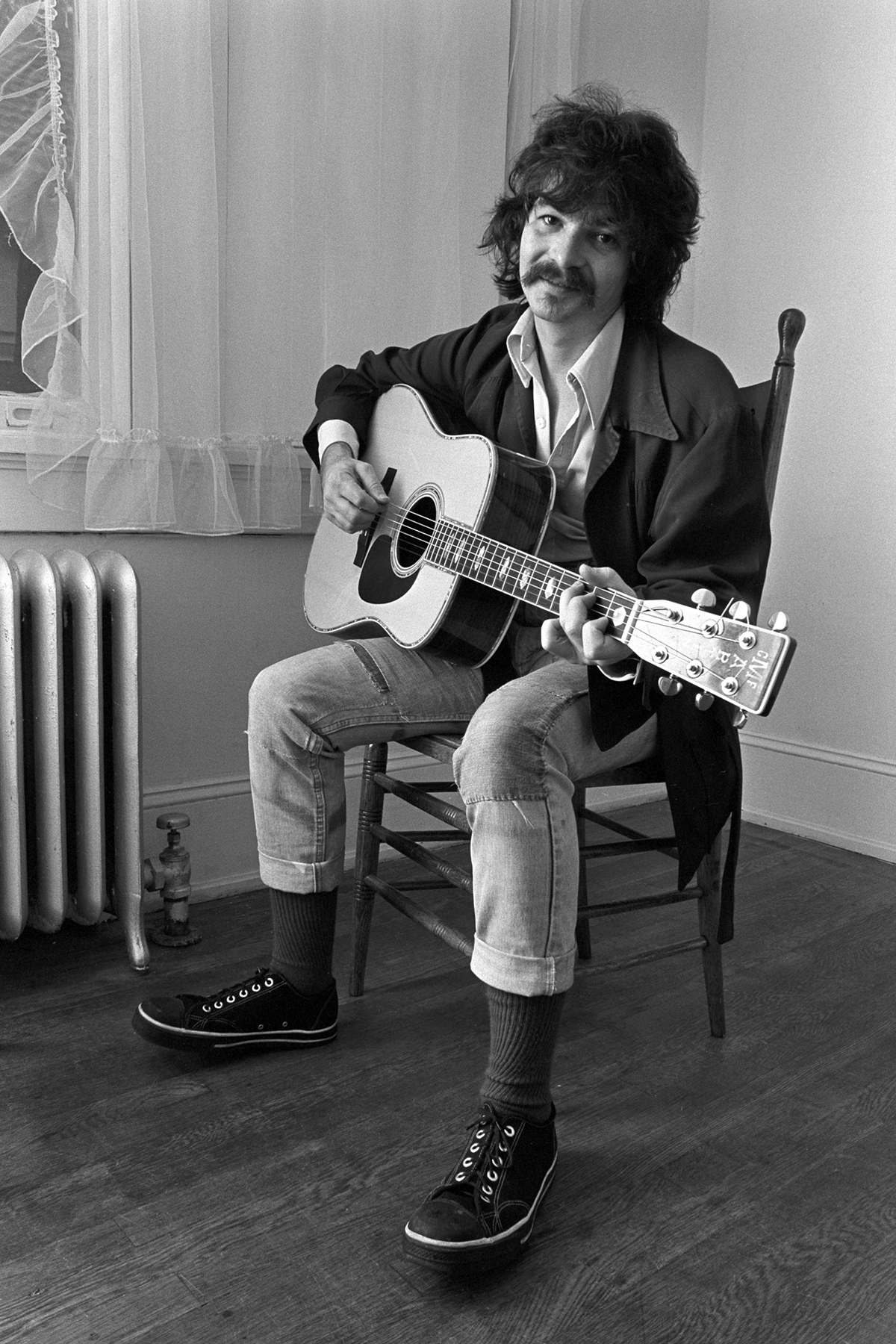 On April 7th, Prine died due to complications from the virus. He was 73. The outpouring of love and grief around the world was huge and effusive. His songs were streamed 20 million times in two days. Bob Dylan said, “John’s talent and sprit was a gift to the world. We were lucky to have seen and heard him.” Michael D. Higgins, the president of Ireland, where Fiona grew up, called Prine “a voice of tolerance, inclusion, whimsy, and protest, [capturing] the experience of those on the margins in societies.”