Climate change could result in a more abrupt collapse of many animal species than previously thought, starting in the next decade if greenhouse gas emissions are not reduced, according to a study published this month in Nature.

The study predicted that large swaths of ecosystems would falter in waves, creating sudden die-offs that would be catastrophic not only for wildlife, but for the humans who depend on it.

“For a long time things can seem OK and then suddenly they’re not,” said Alex L. Pigot, a scientist at University College London and one of the study’s authors. “Then, it’s too late to do anything about it because you’ve already fallen over this cliff edge.”

The latest research adds to an already bleak picture for the world’s wildlife unless urgent action is taken to preserve habitats and limit climate change. More than a million plant and animal species are at risk of extinction because of the myriad ways humans are changing the earth by farming, fishing, logging, mining, poaching and burning fossil fuels.

The study looked at more than 30,000 species on land and in water to predict how soon climate change would affect population levels and whether those levels would change gradually or suddenly. To answer these questions, the authors determined the hottest temperature that a species is known to have withstood, and then predicted when that temperature would be surpassed around the world under different emissions scenarios. 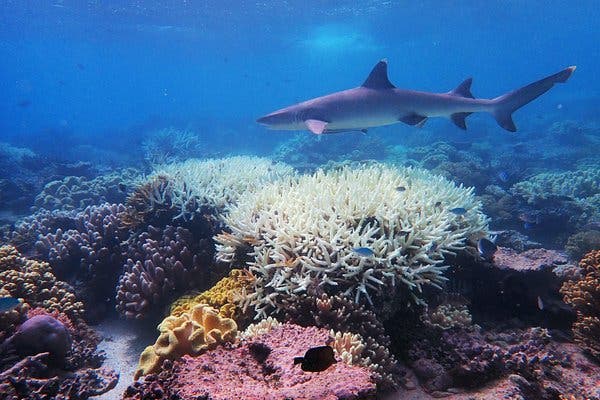 “It’s not that it happens in some places,” said Cory Merow, an ecologist at the University of Connecticut and one of the study’s authors. “No matter how you slice the analysis, it always seems to happen.”

If greenhouse gas emissions remain on current trajectories, the research showed that abrupt collapses in tropical oceans could begin in the next decade. Coral bleaching events over the last several years suggest that these losses have already started, the scientists said. Collapse in tropical forests, home to some of the most diverse ecosystems on earth, could follow by the 2040s.

But if global warming was held to below 2 degrees Celsius, the number of species exposed to dangerous climate change would drop by 60 percent. That, in turn, would limit the number of ecosystems exposed to catastrophic collapse to about 2 percent.

“The benefits of early and rapid action are massive and prevent the extinction of thousands of species,” said Christopher H. Trisos, a scientist at the University of Cape Town and one of the study’s authors.

The study does not take into account other factors that could help or hurt a species’ survival. For example, some species may tolerate or adapt to higher temperatures; on the other hand, if their food sources could not, they would die off just the same.Sign Up

“It provides yet another, critical wake-up call about the massive repercussions of a rapidly warming world,” said Walter Jetz, an ecologist at Yale University who did not participate in the study. He added that it was more evidence of the importance of following through on the pledges that nations around the world made in the Paris Agreement on climate change. The Trump administration is in the process of withdrawing from that commitment.

The study suggested that even keeping global warming to less than 2 degrees Celsius, in accordance with the Paris Agreement, would still leave many people and ecosystems vulnerable.

Catrin Einhorn reports on wildlife and extinction for the Climate desk. She has also worked on the Investigations desk, where she was part of the Times team that received the 2018 Pulitzer Prize.