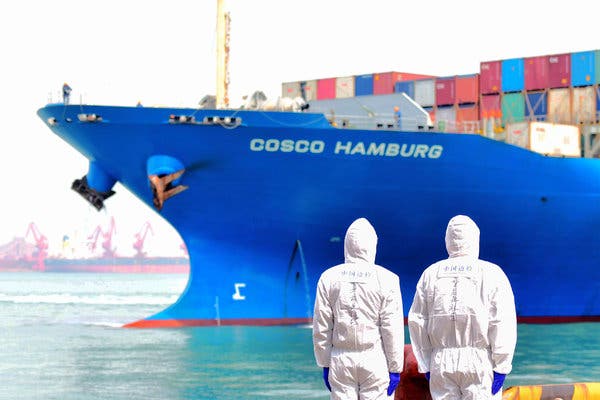 A container ship in Qingdao, China. One way the coronavirus may change the world economy is in making countries re-examine their reliance on far-flung supply chains.Credit…CHINATOPIX, via Associated Press

When big convulsive economic events happen, the implications tend to take years to play out, and spiral in unpredictable directions.

Who would have thought that a crisis that began with mortgage defaults in American suburbs in 2007 would lead to a fiscal crisis in Greece in 2010? Or that a stock market crash in New York in 1929 would contribute to the rise of fascists in Europe in the 1930s?

The world economy is an infinitely complicated web of interconnections. We each have a series of direct economic relationships we can see: the stores we buy from, the employer that pays our salary, the bank that makes us a home loan. But once you get two or three levels out, it’s really impossible to know with any confidence how those connections work.

And that, in turn, shows what is unnerving about the economic calamity accompanying the spread of the novel coronavirus.

In the years ahead, we will learn what happens when that web is torn apart, when millions of those links are destroyed all at once. And it opens the possibility of a global economy completely different from the one that has prevailed in recent decades.

“As much as I hope we are able to get ordinary economic activity back up, that’s just the beginning of our problem,” said Adam Tooze, a historian at Columbia University and author of “Crashed,” a study of the extensive global ripple effects of the 2008 financial crisis. “This is a period of radical uncertainty, an order of magnitude greater than anything we’re used to.”

It would be foolish, amid such uncertainty, to make overly confident predictions about how the world economic order will look in five years, or even in five months.

But one lesson of these episodes of economic tumult is that those surprising ripple effects tend to result from longstanding unaddressed frailties. Crises have a way of bringing to the fore issues that are easy to ignore in good times.

One obvious candidate is globalization, in which companies can move production wherever it’s most efficient, people can hop on a plane and go nearly anywhere, and money can flow to wherever it will be put to its highest use. The idea of a world economy with the United States at its center was already falling apart, between the rise of China and America’s own turn toward nationalism.

There are signs that the Covid-19 crisis is exaggerating, and possibly cementing, those changes.

“There will be a rethink of how much any country wants to be reliant on any other country,” said Elizabeth Economy, a senior fellow at the Council on Foreign Relations. “I don’t think fundamentally this is the end of globalization. But this does accelerate the type of thinking that has been going on in the Trump administration, that there are critical technologies, critical resources, reserve manufacturing capacity that we want here in the U.S. in case of crisis.”

Consider just a few pieces of evidence for the weakening underpinnings of globalization.

France’s finance minister directed French companies to re-evaluate their supply chains to become less dependent on China and other Asian nations. U.S. Customs and Border Protection has said it will seize exports of certain medical supplies. And on Friday, Senator Lindsey Graham suggested that the United States should punish China for failing to contain the virus by canceling debt the Chinese government owns — a step that would risk the role of U.S. Treasury bonds as the bedrock of the world financial system.

Even before the coronavirus hit, the limits of globalization were becoming clearer.
~~~  CONTINUE  ~~~