URU EU WAU WAU TERRITORY, Brazil — The billboard at the entrance of a tiny Indigenous village in the Amazon has become a relic in less than a decade, boasting of something no longer true.

“Here, there is investment by the federal government,” proclaims the sign, erected in 2012, which is now shrouded by fallen palm tree fronds.

In fact, this tiny hamlet in Rondônia state, called Alto Jamari, home to some 10 families of the Uru Eu Wau Wau tribe, is barely surviving, just like scores of other struggling villages in the region that for decades have served as havens for Indigenous culture and bulwarks against deforestation in Brazil.

Federal aid is drying up at the same time that more outsiders are trespassing on their lands, eager to illegally exploit the forest’s resources, and as the coronavirus poses a deadly threat, having already reached a few remote villages.

Local leaders and Indigenous advocates direct their blame for this deteriorating situation toward one person: President Jair Bolsonaro.

During his run for the presidency, Mr. Bolsonaro promised he would open up the Amazon to more commercial development, including mining and large-scale farming.

“Where there is Indigenous land,” he has said, “there is wealth underneath it.” 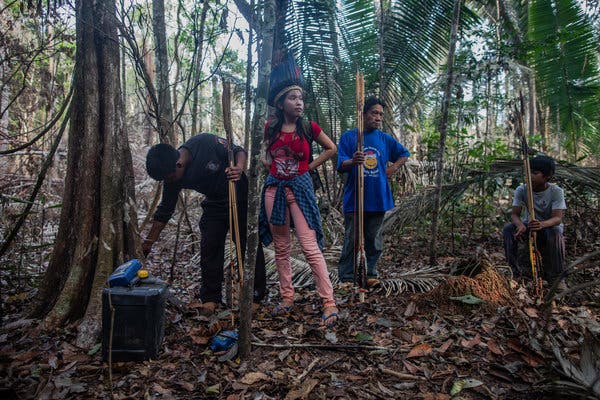 Since taking office a little more than a year ago, Mr. Bolsonaro has moved aggressively to further those development goals, putting in place policies that critics fear have set in motion a new era of ethnocide for Indigenous communities.

He has started dismantling a system of protection for Indigenous communities enshrined in Brazil’s Constitution, with his government last year slashing the funding of the National Indian Foundation, the federal agency responsible for upholding those Indigenous rights.

As president, he has vowed not to designate “one centimeter” more as protected Indigenous lands, arguing that living in isolation is an anachronism in the 21st century and an impediment to economic growth.

“The Indigenous person can’t remain in his land as if he were some prehistoric creature,” Mr. Bolsonaro said in February.

Also in February, Mr. Bolsonaro presented a bill to Congress that could effectively legalize the illegal mining ventures that have polluted rivers and torn down large swaths of the Amazon.

The proposed legislation, which Congress has shown no appetite to advance as Brazil battles the coronavirus, would also authorize oil and gas exploration and hydropower plants on Indigenous territories. Under the plan, native communities would be consulted about projects — but would not be given veto power.

Last year, Mr. Bolsonaro bragged that he had “put an end to” what he called “astronomical fines” against companies that violate environmental law in the Amazon, removing one of the few disincentives developers face.

Brazil’s president is keeping his promises about expanding development in the Amazon. And for many of the Indigenous people who live there, the Bolsonaro era is posing an existential threat.

‘Razing Down Our Forest’ 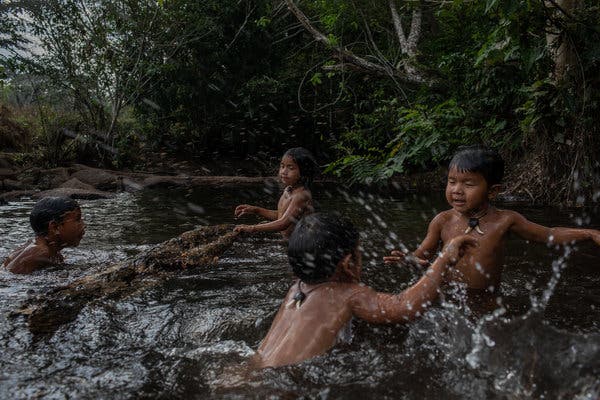 While these rights have never been fully upheld, they are being eviscerated in the Bolsonaro era, according to Indigenous leaders and activists.

For communities with small populations, like the Uru Eu Wau Wau, the government’s stance could mean their total disappearance as distinct tribes.

The schoolhouse at the largest of the Uru Eu Wau Wau’s six villages — a modern facility surrounded by a cluster of modest huts — sits empty. Teachers stopped showing up last year because they weren’t being paid.

Visits from doctors and nurses have become rare, in large part because Cuban doctors who had been providing care in remote villages left abruptly shortly before Mr. Bolsonaro took office in January 2019 in response to threats from the incoming president.

Illegal incursions by loggers into the edges of the territory have become increasingly frequent, putting its residents on a war footing.