Peter Beard, a New York photographer, artist and naturalist to whom the word “wild” was roundly applied, both for his death-defying photographs of African wildlife and for his own much-publicized days — decades, really — as an amorous, bibulous, pharmaceutically inclined man about town, was found dead in the woods on Sunday, almost three weeks after he disappeared from his home in Montauk on the East End of Long Island. He was 82.

His family confirmed that a body found in Camp Hero State Park in Montauk was that of Mr. Beard.

He had dementia and had experienced at least one stroke. He was last seen on March 31, and the authorities had conducted an extensive search for him.

“We are all heartbroken by the confirmation of our beloved Peter’s death,” the family said in a statement, adding, “He died where he lived: in nature.”

Mr. Beard’s best-known work was the book “The End of the Game,” first published in 1965. Comprising his text and photographs, it documented not only the vanishing romance of Africa — a place long prized by Western colonialists for its open savannas and abundant big game — but also the tragedy of the continent’s imperiled wildlife, in particular the elephant.

Peter Beard, “The End of the Game”

In later years, Mr. Beard became famous for embellishing his photographic prints with ink and blood — either human (his own) or animal (from a butcher) — yielding complex, cryptic, multilayered surfaces.

He was also known for the idiosyncratic, genre-bending diaries that he had kept since he was a boy — profuse assemblages of words, images and found objects like stones, feathers, train tickets and toenail clippings — and for the large, even more profuse collages to which the diaries later gave wing.

But as renowned as he was for his work (he received solo exhibitions at the International Center of Photography in Manhattan, the Centre National de la Photographie in Paris and elsewhere), Mr. Beard remained at least as well known for his swashbuckling, highly public private life.

Even by the dashing standards of wildlife photography, his résumé was the stuff of high drama, full of daring, danger, romance and tall tales, many of them actually true. Had Mr. Beard not already existed, he might well have been the result of a collaborative brain wave by Hemingway, F. Scott Fitzgerald and Paul Bowles.

He was matinee-idol handsome and, as an heir to a fortune, wealthy long before his photographs began selling for hundreds of thousands of dollars apiece.

Besides documenting Africa’s vanishing fauna, he photographed some of the world’s most beautiful women in fashion shoots for Vogue, Elle and other magazines. He had well-documented romances with many of them, including Candice Bergen and Lee Radziwill, the sister of Jacqueline Kennedy Onassis.

“The last thing left in nature is the beauty of women, so I’m very happy photographing it,” Mr. Beard told the British newspaper The Observer in 1997.

He discovered one supermodel, Iman, and spun a fabulous legend about her origins. He was married for a time to another, Cheryl Tiegs. 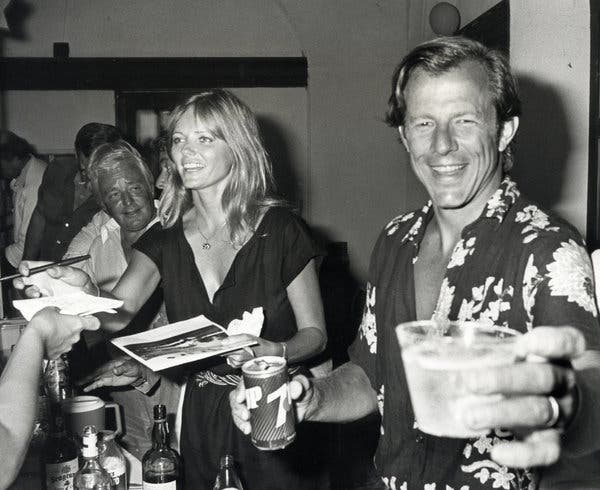 A denizen of Studio 54 in its disco-era heyday, he numbered among his friends the likes of Andy Warhol, Truman Capote, Salvador Dalí, Mrs. Onassis, Grace Jones, the Rolling Stones and Francis Bacon, who painted his portrait more than once.

In 1963 he appeared, nude, in Adolfas Mekas’s avant-garde film “Hallelujah the Hills!,” a critical and popular hit at the inaugural New York Film Festival. He later recalled that “Andy Warhol called it the first streak.”

He seemed to possess the indefatigability of a half-dozen men, and well into old age routinely reveled until dawn, his escapades becoming grist for gossip columnists worldwide.

“Peter Beard — gentleman, socialite, artist, photographer, Lothario, prophet, playboy and fan of recreational drugs — is the last of the adventurers,” The Observer said.

“James Dean grown up,” another British paper, The Evening Standard, called him.

There was the time, for example, as Vanity Fair reported in 1996, that Mr. Beard, after roistering until 5 a.m. at a Nairobi nightclub, emerged the next afternoon from a tent on his ranch in the Kenyan countryside followed by the “four or five” young Ethiopian women he had brought home with him.

“We were very cozy,” he noted.

There was the time in 2013, The New York Post reported, that Mr. Beard, then 75, returned home about 6 a.m. to the Midtown Manhattan apartment he shared with his wife, Nejma Beard, who was also his agent, after a night’s revels.