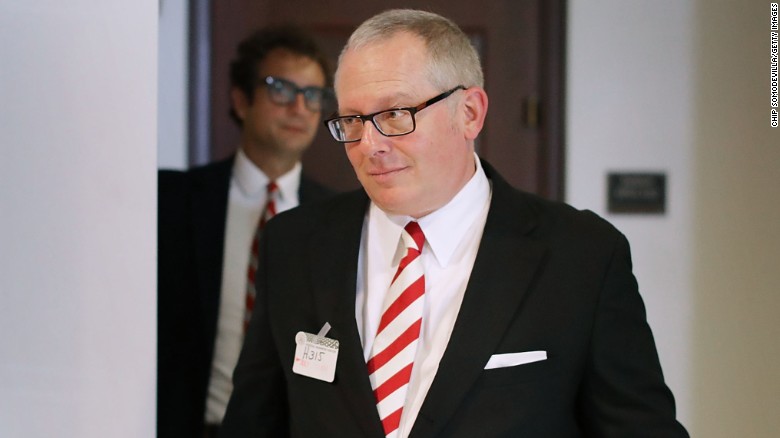 (CNN)The new spokesman for the Department of Health and Human Services in a series of now-deleted tweets made racist and derogatory comments about Chinese people, said Democrats wanted the coronavirus to kill millions of people and accused the media of intentionally creating panic around the pandemic to hurt President Donald Trump.

Michael Caputo, a longtime New York Republican political operative who worked on Trump’s 2016 presidential campaign, was appointed last week as Assistant Secretary for Public Affairs at HHS, a prominent communications role at the department which serves a central role in the federal government’s response to the coronavirus pandemic.
Caputo, a prolific user who often tweeted insults and profanity, recently erased nearly his entire Twitter history from before April 12. CNN’s KFile used the Internet Archive’s Way Back Machine to review more than 1300 deleted tweets and retweets from late February to early April many of which were regarding the rapidly spreading coronavirus.
While he occasionally weighed in with praise for public officials or more straightforward observations, tweets from this period are also littered with conspiracy theories and controversial language to go after perceived critics of the Trump administration.
In a series of tweets on March 12, Caputo responded to a baseless conspiracy theory that the United States brought the coronavirus to Wuhan, China, by tweeting that “millions of Chinese suck the blood out of rabid bats as an appetizer and eat the ass out of anteaters.”
He followed up at another user, “Don’t you have a bat to eat?” and tweeted at another user, “You’re very convincing, Wang.”
After publication, Caputo responded to CNN’s request for comment by saying that reporting on his past tweets is “fair game, dude. I don’t care. It doesn’t matter to me at all.” He claimed that he deletes his tweets “every month and I do it because it drives people mad.”
He added “when you tweet in spirited fashion, KFile is going to have them. I’ve known that all my days. So I don’t mind what you’ve done.” Caputo defended his past Twitter behavior saying he was “a defender of the President” tweeting in a “spirited manner” that included calling out reporters, but he said he’s “now a servant of the American people and some might be disappointed, but my tweets will be different.”
Spokespeople for HHS did not respond to requests for comment. A spokesperson for the White House declined to comment.
Caputo also used his Twitter account to aggressively attack Democrats and the media.
In March, he referred to one White House reporter as “a dick” after that reporter had a heated exchange with the President. He said many Americans viewed reporters as “the enemy of the people” for “carrying water for the Chinese Communist Party.” He implied that MSNBC host Joe Scarborough was guilty of sedition.
On March 8, he said a Democrat may try to inflict hundreds of thousands of American deaths from the coronavirus, creating a hypothetical scenario comparable to James Hodgkinson, the anti-Trump man who shot House Majority Whip Rep. Steve Scalise and four others during a Republican congressional baseball game practice in 2017.
“Coronavirus is the Democrats’ new Russia, their new Ukraine. And nobody will believe them except their zombies. But know this: The Dems’ strategy to defeat @realDonaldTrump requires 100s of thousands of American deaths. Will one of their nutjobs make it happen, a la Hodgkinson?”
That same day, Caputo retweeted conservative actor Nick Searcy saying, “Democrats are pulling for the virus to kill a lot of people.”
In other tweets from March, Caputo claimed the media created “intentional” panic created around the outbreak, saying it was “orchestrated by soulless Trump critics who seize every crisis as an opportunity to stop him.”
~~~  CONTINUE  ~~~