In the loft above the pickle factory, dozens of women sat each day at looms or hovered around copper-lined tanks filled with dye, weaving drapes and rugs for the government.

It was San Francisco, in the early 1940s, and Margery Magnani, a 20-something French literature major, somehow found herself the forewoman, supervising as many as 95 workers.

Most of them were old enough to be her mother or grandmother. Some sewed cut-up old military uniforms together by hand. Others hung the finished fabrics over large poles so they would become crisp and presentable.

The younger women worked the 75-gallon tanks, dyeing about 25 pounds of yarn a day into shades of deep red or green. The material would end up as rugs, or drapes for an Army club, or decorations for the venereal disease clinic.

The work usually went without a hitch — except for when the dye would drip down into the pickles below.

“These people would come upstairs, just screaming their heads off because all of a sudden there was red and blue water trickling down,” Ms. Magnani said in an oral history recorded by the Smithsonian’s Archives of American Art.

These weavers were part of a federal jobs program launched in another uncertain time and designed to employ painters and sculptors, actors, musicians, writers and craftspeople who were having a hard time making a living.

For roughly a decade, starting with the Depression of the 1930s, a generation of artists received their paychecks from the government under the auspices of President Franklin D. Roosevelt’s New Deal.

“On the whole they were united by one very simple, basic thing: They needed to eat,” said Burgoyne Diller, a mural supervisor for the Federal Art Project, in an oral history. 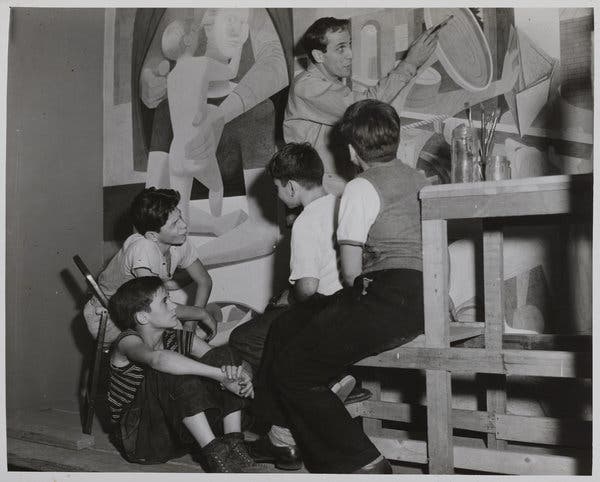 There is talk again in some circles of fashioning additional federal help for artists as the pandemic wreaks havoc on their livelihoods. Some lawmakers, for example, wanted $4 billion in emergency funding for the arts included in the stimulus package.

“There are going to be a lot of people out of work who make their living as a musician, people working for community theaters,” said Representative Chellie Pingree, a Maine Democrat and leader of the Congressional Arts Caucus, last month. “You can’t turn your back on them.”

But few defenders of the arts are optimistic that a program as sprawling and generous as the New Deal initiative could happen now.

“I’m not sure you can get Congress to agree on anything,” said Barbara Bernstein, founder of the New Deal Art Registry, an online guide to art from that era. “Especially not something as easy to make fun of as an art program.”

And he has no shortage of allies, some of whom view the arts as elitist and others who say that, however valuable, cultural matters should not be the work of government.

Nikki Haley, the Republican former United Nations ambassador, reacted with criticism when Congress finalized the $2 trillion emergency aid bill in March and set aside $250 million for the arts, including the N.E.A., the N.E.H., and public television and radio — less than 7 percent of what lawmakers like Representative Pingree had pushed for.

“How many more people could have been helped with this money?” she tweeted.

The mood was different when the New Deal program passed. Certainly conservatives of that era viewed some artists as dangerously radical leftists, but Roosevelt’s program was a minor part of a major initiative that included money for projects like new roads and bridges. It was pushed by a popular president whose party controlled both houses of Congress. And it came at a time when some in the government saw the morale-boosting benefits of creating a truly “American” artistic style, one no longer derivative of Europe, said Ms. Bernstein.

During that era, so many programs disbursed arts funding under a parade of acronyms that even the artists who had benefited couldn’t keep the names straight. 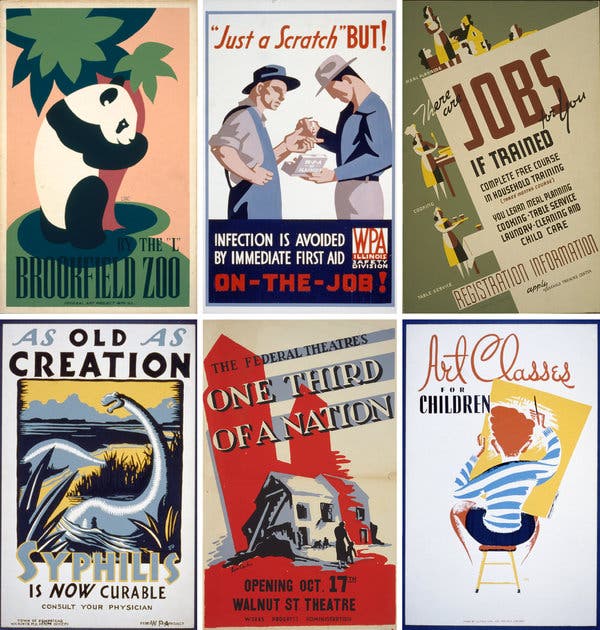