A hallmark of America’s strength and resilience has been our ability to seize opportunity amid our greatest crises.

After the Civil War, we adopted constitutional amendments to end slavery and enshrine the concept of equal protection under the law. In the Great Depression, we established the Works Progress Administration and Civilian Conservation Corps. After World War II, we had the G.I. Bill and founded NATO and the United Nations. During the Vietnam War and civil rights era, Congress abolished segregation, secured the right to vote for all Americans, and reinforced our social safety net through the Great Society.

As we struggle through the Covid-19 crisis — the greatest challenge to global health, national security and our economy since World War II — we must ask again how we can emerge a more just, equitable and cohesive nation.

Unfortunately, we are today condemned to be led by a president who has no conception of the national interest apart from his personal interest. Donald Trump is obsessed with his image and poll numbers and the Dow Jones average, but sadly none of the ambitious questions that inspired his predecessors — chiefly, how can we exit this crucible of death and hardship as a more decent America?

Yet, as destructive and lethal as Mr. Trump’s failings are, we cannot afford to miss this moment of reckoning. The coronavirus has laid bare our domestic divisions, unequal economy, and glaring racial and socio-economic disparities as well as the fragility of our democracy. To recover from this crisis, it will not suffice to contain the carnage, reopen our economy and “get back to normal.” “Normal” is too costly and deadly for all Americans.

Now is the time to rebuild better — our economy, our health care and education systems, our democratic institutions — so that we cure the root causes of our collective disease. While one can hope we soon will be blessed with new leadership committed to national unity, human dignity, and respect for democracy, we cannot afford to wish and wait.

There are two steps Congress should take now to lay the foundation for national renewal by providing seed capital for transformative change.

The first is to preserve and protect our democracy by ensuring free and fair elections in November. Long before Covid-19, partisan gerrymandering, voter exclusion, dark money and foreign interference combined to erode the integrity of our electoral system. Now, amid this pandemic, we risk many Americans being prevented from voting because they cannot safely get to a polling station, as evidenced by the callously run Wisconsin elections this month. 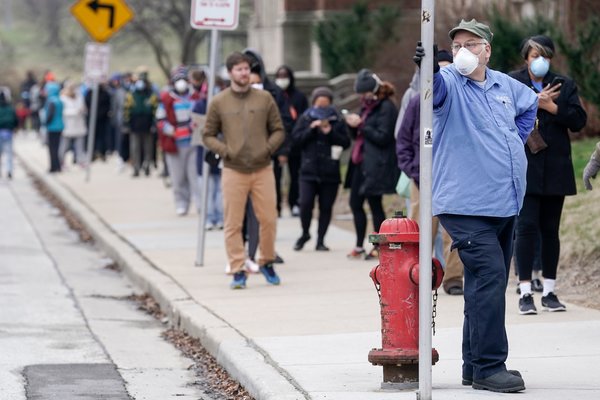 The next legislation to pass Congress must ensure all eligible Americans can vote safely by fully funding (roughly $5 billion) and requiring all states to provide these things: no-excuse absentee voting by mail; at least 20 days of early voting; curbside or drive-through voting; accommodations for the disabled; and accessible voting places in rural and tribal areas.

A bill introduced by Senator Kamala Harris and another by Senators Amy Klobuchar and Ron Wyden would accomplish this goal. Mr. Trump and the Senate majority leader, Mitch McConnell, strongly oppose anything that makes it safer or easier for Americans to vote. But, as citizens, we cannot allow their naked partisanship and unabashed disdain for democracy to strip us of our constitutional right to vote securely.

Second, the United States has a rare opportunity to accelerate our recovery from the coronavirus while starting to restore an ethos of service to American culture. To reopen our states and towns safely, we need to hugely scale up testing and our capacity to trace the contacts of those infected to enable them to be isolated and cared for.

This will require trained contact tracers who can interview, assess and support those quarantined, and potentially administer vaccines. Experts estimate the United States will need 100,000 to 300,000 contact tracers (costing approximately $3.6 billion per 100,000 workers annually) with skills that match those of most high school graduates. We can recruit this work force from public health personnel as well as the newly unemployed, college students, recent graduates, idled Peace Corps and AmeriCorps volunteers, and retirees.

Congress should fund both the Centers for Disease Control and Prevention and the states to establish this “Health Force,” as proposed by Senators Michael Bennet and Kirsten Gillibrand. Along with Senator Chris Coons’s plan to expand AmeriCorps tenfold to 750,000 workers over three years, these investments would enable Americans from all backgrounds to perform vital national service when our health, education and infrastructure needs (such as expanding broadband access) are more urgent than ever.

These important civic initiatives would strengthen our democracy and national cohesion, providing a down payment on more ambitious efforts to rebuild our health system and economy, while increasing opportunity and equity. That is why the anti-government, reward-the-rich Republican leadership in Congress will undoubtedly oppose such efforts.

Yet in this moment of crisis, thankfully, nothing can happen without bipartisan compromise. Protecting our elections and expanding national service are imperatives that congressional Democrats must insist upon in negotiations over upcoming coronavirus legislation so that, despite Donald Trump, we can again emerge from profound crisis with renewed national strength and unity.

Susan E. Rice, the national security adviser from 2013 to 2017 and a former United States ambassador to the United Nations, is a contributing opinion writer. She is the author of the memoir “Tough Love: My Story of the Things Worth Fighting For.”  @AmbassadorRice