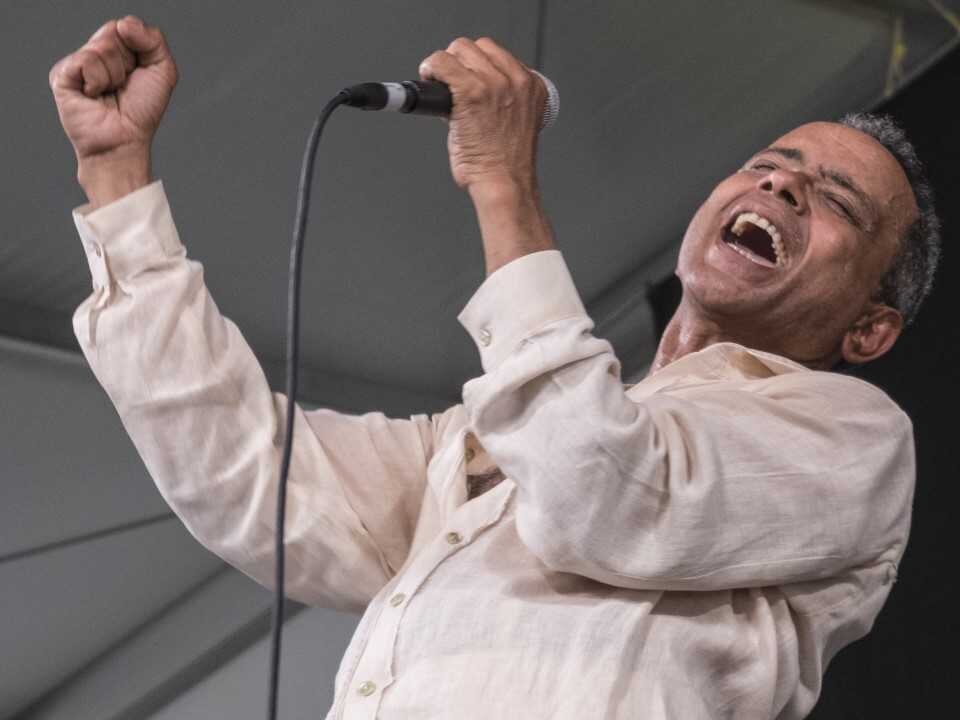 John Boutte’s famous performance at the 2006 New Orleans Jazz and Heritage Festival is just one of the beloved performances included in WWOZ’s Jazz Festing in Place series.

The New Orleans Jazz and Heritage Festival, one of this country’s greatest musical gatherings, would have celebrated its 50th anniversary this year. But instead the stages at Jazz Fest, as it is more commonly known, will be empty for the first time since 1970 after the organizers were forced to cancel due to the coronavirus pandemic. But there is still music coming from New Orleans.

The New Orleans Jazz and Heritage Foundation is delving into its cast archives and, along with community radio station WWOZ, presenting a stream of some of the greatest performances in the festival’s history. It’s called Jazz Festing in Place, and it involves some of the most iconic names in New Orleans and American music history: Ella Fitzgerald, Fats Domino, Trombone Shorty, Allen Toussaint, The Neville Brothers, Bonnie Raitt, Toots and the Maytals and many more.

NPR’s Scott Simon spoke to Dave Ankers about what Jazz Fest means to the city of New Orleans, how he went about culling the archives into two weekends of broadcasts and some of his favorite sets in the festival’s history. Listen to the radio version at the audio link above, and read on for highlights of the interview.

The Jazz and Heritage Festival in New Orleans is part of the city’s identity as much as Mardi Gras is. It’s the music-loving side of the city. It’s not just about the city and seeing touring bands who might come in, but it’s about all this expression of New Orleans culture: the food, the crafts, the people, the way people connect to each other and the music, all in one place, manifesting itself for eight days. People really really care about this.

The first thing we did is we sat down and we looked to see what we had in the archives. We made a wish list. I talked to lots of our volunteer show hosts, who go to Jazz Fest every year, and we went through and we started off with a list of about 250 items, which still seems small considering the wealth of music we have in New Orleans. And then we went through, and we had to cross things off because we didn’t have it, and then we circled things like three times, like “Oh my god, we have to have this thing.” Time and again, people came back to John Boutté in 2006, or Ella [Fitzgerald] and Stevie [Wonder in 1977] or the [1974] Fire Benefit with Professor Longhair. And we knew that those were key things that we had to make sure that we included.

When we started our broadcast on Thursday [April 23], in about 10 minutes we suddenly had surpassed our Mardi Gras numbers; and then we were four times Mardi Gras numbers. But we were stunned, really stunned, by what happened in that one hour. And we realized that people all over the world really, really wanted to be at Jazz Fest.

On one of his favorite Jazz Fest sets included in the broadcast: John Boutté performing at the first installment of the festival after Hurricane Katrina

I know so many people who were [at that performance] and they say that by the end of the set, everyone was down on their knees in tears. It is frequently referred to as one of the high points in the entire history of the festival. And when you listen to the entire set all the way through — which we’re going to broadcast on Sunday — you see how John Boutté is responding to the moment in New Orleans, as many artists did in 2006 at that first Jazz Festival after Katrina, but he’s responding so well and he’s working with the audience and leading the audience through this cathartic, powerful connecting moment. It’s really, really something to listen to.

Jazz Festing In Place will stream performances from 12 p.m. to 8 p.m. ET. Find the full broadcast schedule at wwoz.org.