Andy Warhol was not just an artist; he was a giant evolving sensibility that angled itself through a great portion of the late 20th century, absorbing everything in its passage and altering it, often permanently. He affected painting, film, fashion, partygoing, record-keeping, packaging, branding and a very large manifest of items that fall under the heading of self-presentation. His corpus includes everything from major paintings and epic films to Mylar balloons and generic business portraits to monosyllabic interview responses and the standard italic font that became wholly identified with his rubber-stamped signature. You can’t really appreciate anything Warhol did without having some idea of its place in his evolution. Consequently Warhol, more than even van Gogh or Picasso, endures not as a mere collection of works but as a narrative, one that gets more complex the more closely you look.

Conveying that narrative, coherently and comprehensively, was the task faced by the art critic Blake Gopnik as author of the first true doorstop biography (there have been earlier efforts, but none on this scale). He had to account for how a shy, “effeminate” child of Carpathian immigrants in working-class Pittsburgh came to occupy a central position in American and even global culture, while reinventing his artistic practice again and again, often radically, from the 1950s to his death at 58 in 1987, and also turning his unprepossessing self — his bad skin, his passive and recessive personality, the toupees and wigs he wore to disguise his baldness, even his lifelong abject loneliness — into an internationally recognized and respected trademark.

Having interviewed more than 260 people and consulted some 100,000 documents, Gopnik succeeds in establishing the chronology and tracing the fine lines of Warhol’s many succeeding interests, decisions, departures, whims and relationships of all sorts. Few artists’ biographies can have recorded so many changes — in style, stance and social milieu — occurring often on a week-to-week basis for some 35 years, amounting to a density of information more akin to, say, military history. We will all find our favorite Warhol avatar, of the hundreds on offer, somewhere within these pages. Mine is 33-year-old teeny-bopper Andy, who worked accompanied by loud pop 45s played on repeat. After the artist Ray Johnson visited the studio, he wrote in a letter the phrase “We saw his recent paintings of Liz Taylor as we heard ‘That Little Town Flirt’” over and over for a page and a half. That period didn’t last long — Warhol was never much attuned to music, despite his association with the Velvet Underground — but it resonates because his paintings of the early ’60s share many qualities with the girl-group records of the same era: brass, grit, immediacy, not to mention the impression that both are at once throwaways and for the ages.

Gopnik excels at disentangling the strands of the narrative and correcting common lore. Even someone who has been actively aware of Warhol’s career for more than half a century may forget that there were four separate Factories over 25 years and that the many famous superstars did not all coincide; Edie Sedgwick did not share a timeline with Candy Darling. (There is a way in which Warhol’s career resembles successive iterations of a long-running TV franchise.) Gopnik’s patient chronology brings a sense of proportion to the outline of the life. The Campbell’s Soup cans lasted only a couple of years (with commercial reprises much later), and Warhol’s body of work as a film director a mere five. By the same token, there are many generally overlooked pockets of his career, such as “Raid the Icebox” in 1969, when he compiled a touring collection of 404 objects from the storage rooms at the museum of the Rhode Island School of Design, including “closetfuls of antique shoes”; such retrieval shows are common now, but were unknown then. And Gopnik gives the “Time Capsules” their due. These boxes (1974-87, and perhaps beyond), into which were thrown everything from junk mail to reels of film, were a natural progression from such earlier cataloging projects as the “Screen Tests,” but represented a leap of conceptual logic nevertheless. “‘It’ll all get so simple that everything will be art,’ Warhol had predicted back in 1966. … Now he was finally making that prediction come true in full.”

Gopnik’s research turns up many testimonials by people who witnessed Warhol dropping his mask of robotic blankness and revealing the discerning intelligence within (few direct quotes, sadly), and he presses the case for Warhol remaining an “Old Radical” even while superficially resembling a “New Conservative.” That does not prevent him from second-guessing his subject at every turn. He makes Warhol seem vaguely imitative for incorporating silk-screening into his paintings in 1962 — a pioneering move, although he himself never made the claim — because an employee of his alma mater was doing something like that in Andy’s student days. He chides Warhol for his failures artistic and otherwise, and suggests he is being a conformist when he catches him coinciding with a general trend. He even scores Warhol for the angular signature logo of Interview magazine, “the scrawl of an artist too confident, too busy and above all too important to take care of his writing.” 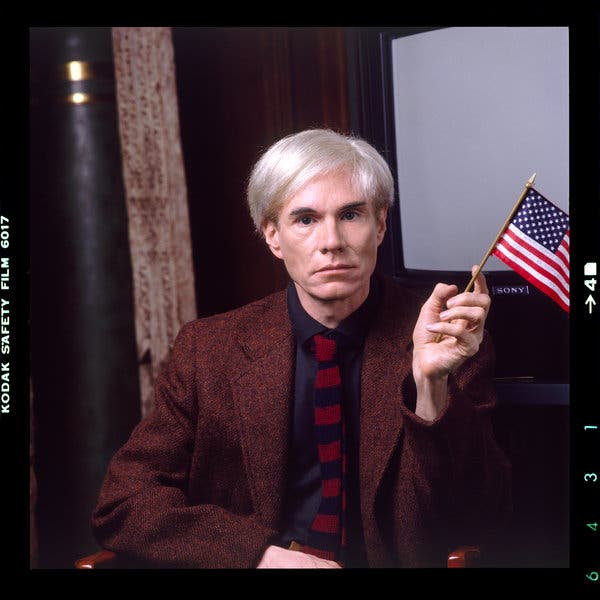 Andy and his flag. Credit…Karen Bystedt

There are several odd features to the book. Gopnik seems to think that too many proper names will confuse the reader, so that quotes are attributed to “one famous critic,” “a convert to Warhol,” “a hotshot young writer in New York,” “one of the founders of Dada,” “the same British critic who coined the term ‘Pop Art’” and so on, like so many blind items. When Gopnik cites a “book of French film theory that had links to his Marilyns. … Its inside front cover lined up 10 images of a gun-toting Marlon Brando that were perfectly echoed in Warhol’s line of Elvises,” he is obviously describing Edgar Morin’s “The Stars,” so why not just say so in the text? (The book’s endnotes appear online and in its e-book edition.)

“Warhol” throws off such mixed signals that it is difficult to determine what kind of reader it was intended for. It is a 900-page brick that evinces much studious research, and yet it is pitched as if it were a feature in a newsmagazine, or as if its readers were primarily serial consumers of celebrity bios. Not expecting the reader to identify Marcel Duchamp or Robert Rauschenberg on first appearance may be standard practice, but Gopnik doesn’t trust you’ll remember them from one time to the next. As a consequence, only a handful of people ever appear without epithets. Any elder who exerted an influence on Warhol will have his or her name preceded by “hero”; contemporaries are tagged as “friend” or “rival.” Gopnik has no confidence in the reader’s attention span, so recapitulations are constant; every point is made, made again, recast slightly, made yet again. Any foreshadowing that occurs early in Warhol’s life — or its reverse, the echoing that happens later on — is liberally signposted, no matter how tenuous the connection. In 1967, a book by Warhol is published by Random House, “a big, mainstream firm recently acquired by RCA, itself a major 1950s client of Warhol’s that had also acquired Hallmark, the patron for Warhol’s Christmas tree.”

The writing is often lazy and reductive in ways that suggest the book is meant for immediate consumption rather than durability. Someone is said to be “blown away” by a nightclub; a gallery is described as “über-hip.” Gopnik writes, “It’s not clear how entertaining the plotless ‘Lonesome Cowboys’ could really have been for a moviegoing public accustomed to the adventures of Herbie the Love Bug” — could he have chosen a movie less likely to share an audience with a Warhol production? He hits the soup-can air horn again and again: “Presley … had a genuine importance that made him more Cordon Bleu than Campbell’s Soup”; Warhol “was canned soup, not eel bisque finished with smoked cotton candy.” And when Gopnik takes off on a literary flight, the vessel is likely to crash: “At his best, Warhol didn’t think outside the box. He thought outside any artistic universe whose laws would allow boxes to exist.”

All those things make the book much more difficult to read than it ought to be. Warhol made extraordinary work and led an equally extraordinary, unprecedented life that carried with it a significant budget of pain. He bridged the chasm between high and low as no one had before, and repeatedly found new ways to tilt the balance between art and life. He initiated or anticipated so many ways that people would later use communication and imagery that he could pass as having predicted Twitter and Instagram. He was gay, and presented himself to the world as a metonym of gayness (which did not prevent him from employing women as beards at times, nor his mother from trying to get him married off). He realized the social art that many had merely theorized before him; wherever he was, he turned his milieu into a spectacle, with every routine occurrence qualifying as an action, accruing documentation as it went. He played with the idea of business art as a kind of parody, then found himself ensnared in the real thing and dragged ever further into its depths, to the point of signing limited-edition prints of Superman, Mickey Mouse, Santa Claus and other characters who by then were sub-Pop. Gopnik gives the reader all the pertinent facts of Warhol’s life, yet his ever-present lecturer’s whiteboard obscures all but the occasional fugitive glimpse of Warhol’s soul.