No one was supposed to get too close to each other over the weekend during a drive-by exhibition of works by 52 artists on the South Fork of Long Island — a dose of culture amid the sterile isolation imposed by the pandemic. But some people couldn’t help themselves.

“At least this one looks like art,” said one man, as he stepped out of a convertible BMW onto the driveway of a rustic home in Sag Harbor on Saturday. He and two others examined the paintings, a cheeky homage to old masters by Darius Yektai that were affixed to two-by-fours nailed to trees. “Not like the other stuff.”

“The other stuff” was on display on the lawns, porches, driveways and garage doors at properties from Hampton Bays to Montauk, some from prominent artists and others by those lesser known. On a windy, blue-skied weekend, most people drove but others came on foot or by bicycle for the show, “Drive-By-Art (Public Art in This Moment of Social Distancing).” 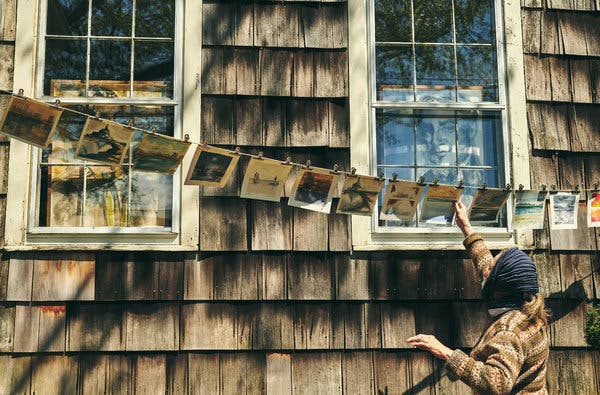 “How do we show empathy and solidarity in this new age that is lacking in emotional solidarity?” asked Mr. Neidich, who put the show together in less than three weeks while living in a Wainscott cottage. “I was feeling a need to find a way to revisit and create a new vocabulary.”

The exhibition had a homespun air. Its signs, on thin yellow paper, sometimes pointed in the wrong direction. The map on the website lacked some detail; there was at least one mistaken address. But people showed up, some wearing masks, some not, in muddy pickup trucks and shiny S.U.V.s, sports cars and Subarus, snaking past the properties and looking, for a change, at something other than a television or computer screen.

The artists included Jeremy Dennis, with a tart commentary on pop culture and politics with wood silhouettes papered over with images, like one of a meeting of Elvis and President Richard M. Nixon; the sculptor Monica Banks, whose work winked at the signature hedges of the Hamptons; and Joe Brondo, an interdisciplinary artist, who positioned three glowing orbs on the lawn of his East Hampton home. Under a chandelier strung from a tree, Dianne Blell presented “Table for Two/Separate Tables,” with furniture set for a spaced-apart restaurant meal, and in the same vein, Toni Ross and her daughter Sara Salaway positioned folding chairs along a fence in Wainscott, with dates and words, making a calendar of social isolation.

Stripped of the imprimatur of a gallery wall or an august museum setting, the works stood alone for better or worse. Eric Fischl’s life-size sculptures of nymphs dancing were amplified by a grove of trees in light leaf at his home in Sag Harbor, while a lone piece of driftwood propped on a driveway and painted by Joan Jonas to mark off six feet stood forlornly. 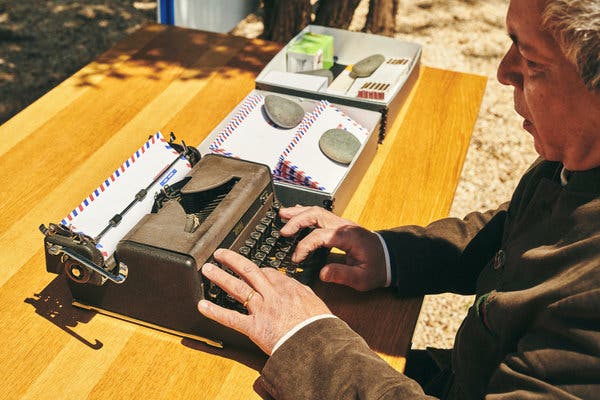 There was spontaneous interaction. The artist Bastienne Schmidt, dressed in a bright blue pea coat and red pants, waved to those who checked out her installation of canvas-wrapped posts set six feet apart at the Bridgehampton home she shares with her husband, the photographer Philippe Cheng. Kathryn McGraw Berry, an architect sampling the tour in a champagne-colored Audi, chatted with Eric Dever, who was checking the wind resistance of his 12 paintings mounted on posts at his 18th-century Water Mill home.

“It’s nice seeing one’s work in the landscape when you’ve been cooped up in the house,” Mr. Dever said. “I grew up in Southern California so I appreciate the drive-through idea.”

At the East Hampton home of Suzanne Anker, an artist who established the Bio-Art Laboratory at the School of Visual Arts in New York, three illuminated, galvanized boxes of seedlings sat atop pedestals. The boxes are part of a series of 31 to create part of the light process that produces photosynthesis in plants.

She said she participated in the drive-by show to give people something to do while cultural institutions have been shut down. “It’s a unique treasure trove where you follow the clues, see the art and see where artists live,” she said. “There is a whole diversity of places and the kind of intimacy that you don’t typically get to experience.”