Andy Beckstoffer in Rutherford, Calif. Napa Valley has unquestionably the best American terroir, and within it, the choicest land has his name on a billboard next to it. Credit…Cayce Clifford for The New York Times

One balmy winter afternoon, Andy Beckstoffer, a grape grower who has done more than nearly anyone to shape the premium U.S. wine industry, was sitting in Mustard’s, a restaurant in Napa Valley that is a kind of clubhouse for the vintner class. Although Beckstoffer Vineyards, the largest private grower in California, had recently set a sales record with a blockbuster harvest of $55 million worth of cabernet sauvignon, its founder was not in the mood to celebrate. The wine industry was in trouble, facing its worst outlook in generations — and that was before the coronavirus struck.

The litany of plagues was merciless: too many grapes, thanks to an epic haul in California and Washington. Too many wildfires and weird bugs unleashed by climate change. Too many new wineries in Napa, upsetting the balance of agriculture and hospitality. And then there were the millennials, or millenniums, as the 80-year-old Mr. Beckstoffer likes to call them.

The generation born between 1981 and 1996 has been blamed for killing everything from napkins to homeownership, and thanks to its passion for hard seltzer, liquid marijuana and other drinkable novelties, it’s been cast as the murder hornet of the wine industry as well. Mr. Beckstoffer finds their health-crazed rituals (Drynuary?) puzzling.

“Wine is plant-based,” he said, shaking his head and picking mirthlessly at a spinach and mushroom burger. “Why don’t the millenniums drink it?”

A few weeks later, Mr. Beckstoffer’s anxiety was borne out by the publication of Silicon Valley Bank’s annual report on the U.S. wine industry — probably the most influential analysis of its kind. For years, its author, Rob McMillan, has preached about the alarming convergence of two trends: higher and higher bottle prices at the premium end of the market, and millennial indifference. Some farmers and winemakers have brushed Mr. McMillan off, and this time, he amped up the urgency, writing plainly: “The issue of greatest concern for the wine business today is the lack of participation in the premium wine category by the large millennial generation.”

The people who make wine don’t just age grape juice, they ripen customers, too, helping them evolve from undergraduate jug-swillers into middle-aged buyers of prestige labels. That process, Mr. McMillan says, appears to have stalled. Even as their purchases of other luxury goods have increased, millennials have balked at high-priced cabernets, which combined with the coronavirus makes 2020 “the worst time since Prohibition for fine wine producers in the United States,” he said in an interview.

The home of fine American wine is Napa Valley, where few benefit more from high prices than Mr. Beckstoffer. The region has unquestionably the best terroir in the United States, and within it, the choicest land has his name on a billboard next to it. Starting in the 1980s, Mr. Beckstoffer began seeking out what he calls “the good stuff” — the vineyards with records of success going back a century or longer. He now owns six, including To Kalon, a plot in the center of the valley considered the crown jewel of American viticulture. For the privilege of squeezing Beckstoffer grapes, winemakers behind labels like Stag’s Leap, Schrader and Realm pay up to $25,000 per ton — more than five times the Napa average.

All of which is to say: If the $71 billion California wine industry topples, then Mr. Beckstoffer, who values his empire at $500 million, may have the farthest to fall. 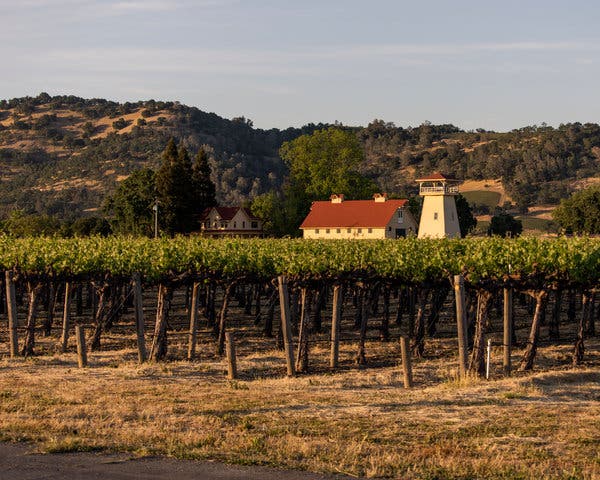 From Navy Grog to an American ‘First Growth’

Most Napa farmers hold some of their grapes back from market, in order to press them into wine themselves. Not Mr. Beckstoffer, who sells every last orb of fruit he can.

“Andy’s different — he has no interest in making wine,” said Curtis Strohl, the general manager of B Cellars, a Napa winery. In fact, Mr. Beckstoffer finds the vinifying process a bore, and he doesn’t care about drinking great vintages himself. His rivals in Napa say he cares only about money. Mr. Beckstoffer says he cares about farmers and the land. But it seems clear that over the course of his 50-year career, as the valley transformed from a drowsy agricultural community into an inland yacht club, the two motivations have worked in concert.