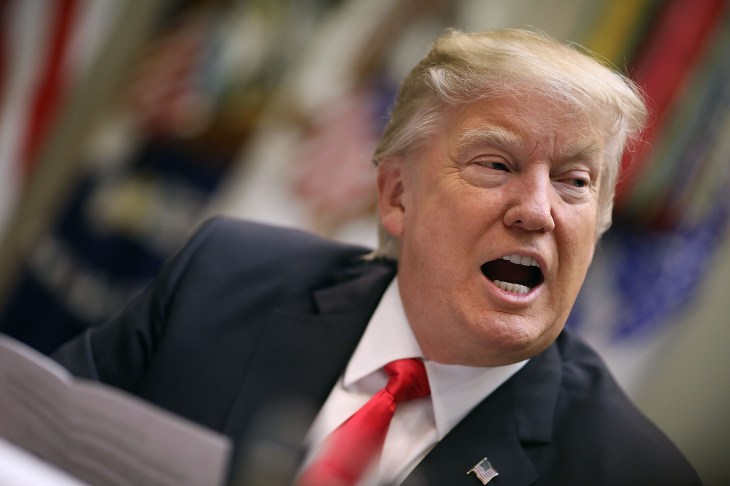 After applying a fact-checking label Tuesday to a misleading vote-by-mail tweet made by US president Donald Trump, Twitter is on a roll and has labeled another of the president’s tweets — this time screening his words from casual view with what it calls a “public interest notice” that states the tweet violated its rules about glorifying violence.

The public interest notice replaces the substance of what Trump wrote, meaning a user has to actively click through to view the offending tweet.

Engagement options are also limited as a result by this label, meaning users can only retweet the offending tweet with a comment; they cannot like it, reply to it or vanilla retweet it.

Twitter’s notice goes on to explain why it has not removed the offending tweet entirely — and this is where the public interest element of the policy kicks in — with the company writing: “Twitter has determined that it may be in the public’s interest for the Tweet to remain accessible.”

Twitter appears to be shrugging off the president’s decision yesterdayto sign an executive order targeting the legal shield which internet companies rely on to protect them from liability for user-created content — doubling down on displeasing Trump who has accused social media platforms generally of deliberately suppressing conservative views, despite plenty of evidence that ad-targeting platform algorithms actually boost outrage-fuelled content and views — which tends, conversely, to amplify conservative viewpoints.

In the latest clash, Trump had tweeted in reference to violent demonstrations taking place in Minneapolis sparked by the killing of a black man, George Floyd, by a white police officer — with the president claiming that “THUGS are dishonoring the memory of George Floyd” before threatening to send in the “Military”.

“Any difficulty and we will assume control but, when the looting starts, the shooting starts. Thank you!” Trump added — making a bald threat to use military force against civilians. 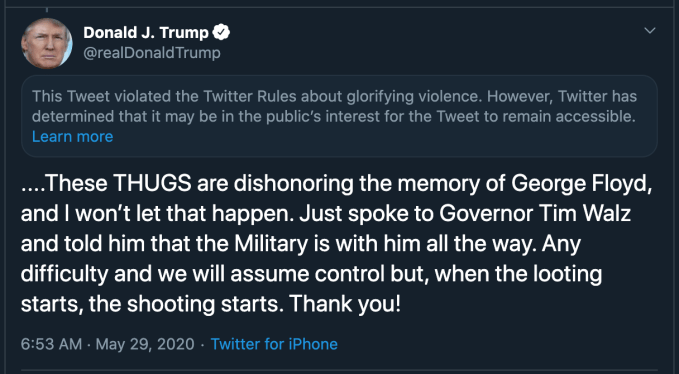 Twitter has wrestled with the issue of how to handle world leaders who break its content rules for years. Most often as a result of Trump who routinely uses its platform to bully all manner of targets — from rival politicians to hated journalists, disobedient business leaders, and even actors who displease him — as well as to dispense direct and sometimes violent threats.