An old girlfriend (very old by now) told me once and I quote “Roberts you have made being ABSOLUTELY WRONG ALL THE TIME, an art form!!!”  It’s hard to believe that he’s surpassed even my almost perfect record.

NPR’s Steve Inskeep talks to Bishop Mariann Edgar Budde of the Episcopal Diocese of Washington about the president’s visit to St. John’s Church amid nationwide protests over the death of George Floyd. 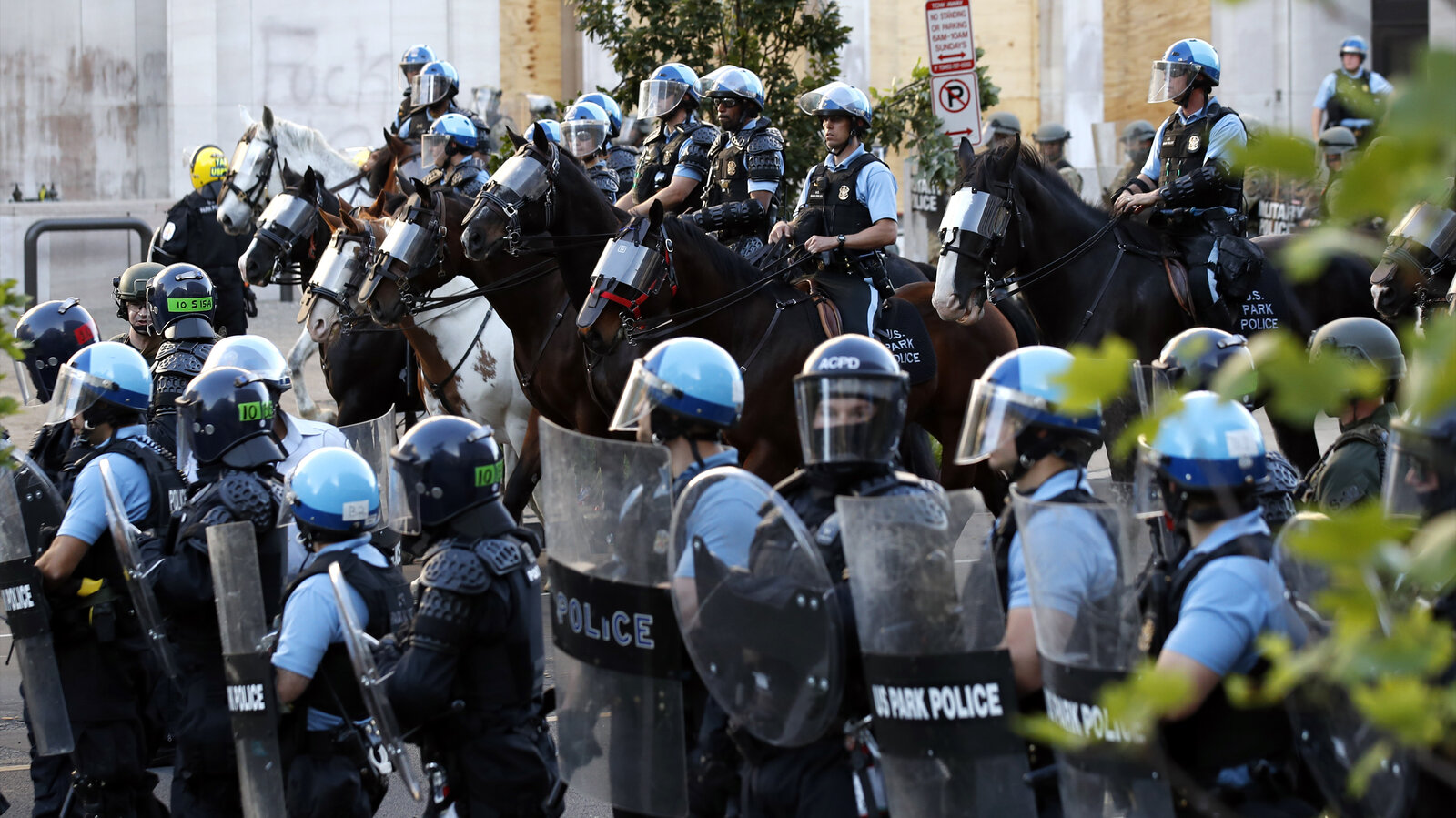 Police gather to remove demonstrators from the area around Lafayette Park and the White House before President Trump’s walk to St. John’s Church.

The plaza between St. John’s Church and Lafayette Park was full of people nonviolently protesting police brutality late Monday afternoon when U.S. Park Police and National Guard troops, with the use of tear gas, suddenly started pushing them away for no apparent reason.

And then it became clear. President Trump wanted to walk from the White House through the park to the Episcopal church. Camera crews scrambled to keep up with him as he strode through the park, followed by his daughter Ivanka and her husband Jared Kushner, along with Attorney General William Barr and other administration officials.

Trump stopped briefly outside the church and held up a Bible.

“We have the greatest country in the world,” he said. “Keep it nice and safe.”

The impromptu visit came just after Trump delivered remarks at the White House, declaring himself “your president of law and order” and demanding that governors deploy National Guard units and “dominate the streets.”

St. John’s Church opened in 1816 and is known as “the Church of the Presidents,” having hosted every U.S. president since James Madison. On this occasion, however, the president’s visit was unannounced, and church authorities were furious that the White House did not bother to alert them beforehand.

“There was no reaching out, no sense that it would require some sort of authorization before using the church as a backdrop in that way,” said The Right Rev. Mariann Edgar Budde, Episcopal Bishop of Washington, with oversight responsibilities for the church. 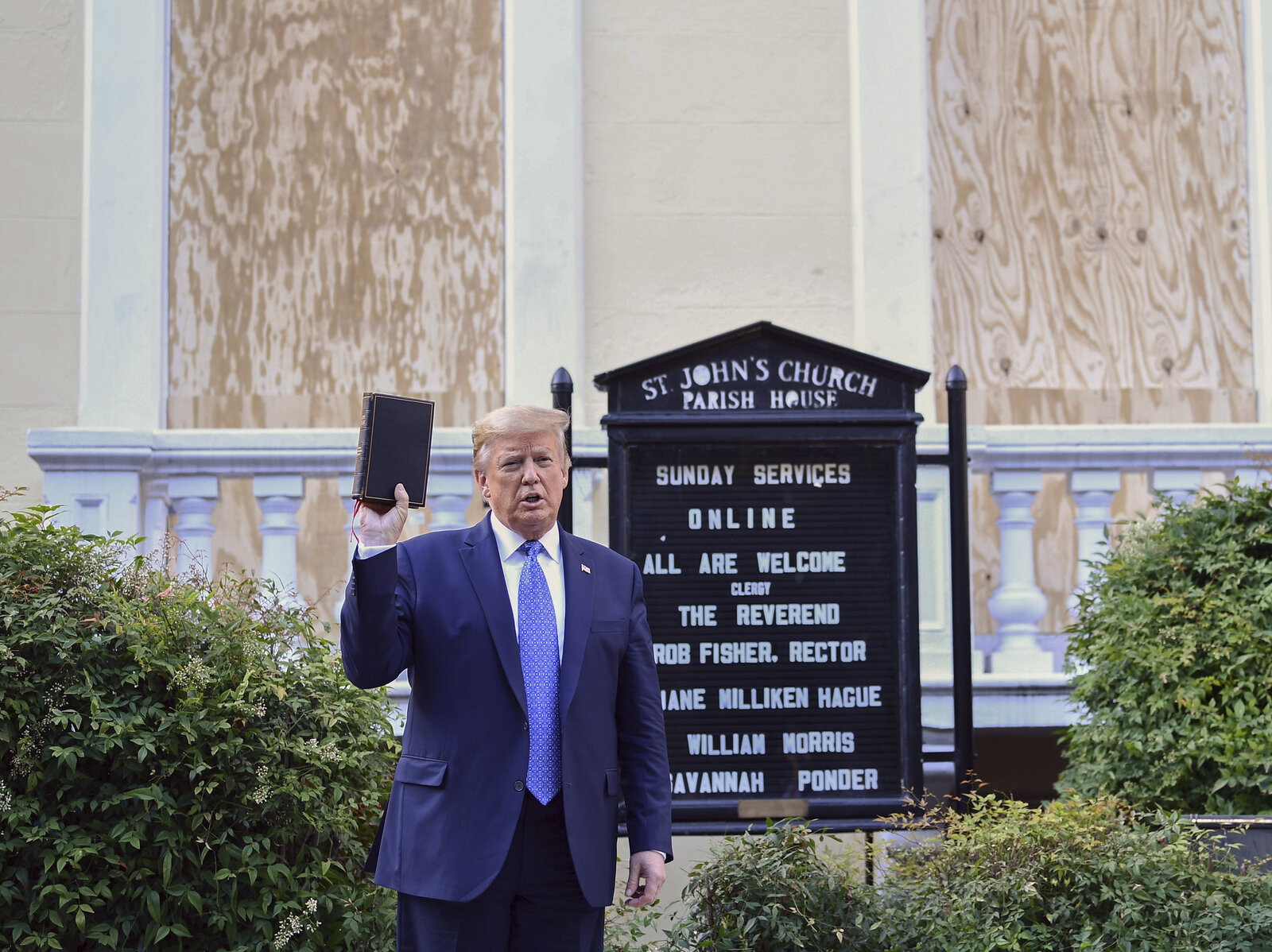 Trump holds up the Bible outside of St John’s Episcopal church across Lafayette Park in Washington, D.C. on June 1, 2020.

When the president held up the Bible, without praying or quoting a verse appropriate for the moment, Budde was further incensed.

“It almost looked like a prop,” she told NPR. “That is the most sacred text of the Judeo-Christian tradition. It speaks messages of love, of God, love of neighbor. I was outraged that he felt that he had the license to do that, and that he would abuse our sacred symbols and our sacred space in that way.”

The church has long been known for its support of social justice causes, and in the hours before the president showed up, clergy and lay volunteers had been ministering to the protesters in the plaza. Protests, some of them violent, had occurred around the church on previous nights, and the church was briefly in danger on Sunday after a fire started in the church basement.

The Bible teaches us to love God and our neighbor; that all people are beloved children of God; that we are to do justice and love kindness. The President used our sacred text as a symbol of division.

A former St. John’s minister, Gini Gerbasi, was among those attending to the protesters in front of the church when the police moved in.

“We were literally DRIVEN OFF of the St. John’s, Lafayette Square patio with tear gas and concussion grenades and police in full riot gear,” she wrote in a Facebook post. “PEOPLE WERE HURT SO THAT [President Trump] COULD HAVE A PHOTO OPPORTUNITY IN FRONT OF THE CHURCH!!! HE WOULD HAVE HAD TO STEP OVER THE MEDICAL SUPPLIES WE LEFT BEHIND BECAUSE WE WERE BEING TEAR GASSED!!!!”

In a statement Monday evening, the Episcopal Church Presiding Bishop Michael Curry joined in the criticism of Trump’s visit.

“This evening, the President of the United States stood in front of St. John’s Episcopal Church, lifted up a bible, and had pictures of himself taken,” Curry said. “In so doing, he used a church building and the Holy Bible for partisan political purposes. This was done in a time of deep hurt and pain in our country, and his action did nothing to help us or to heal us.”

The church visit was praised, however, by a member of Trump’s Evangelical Advisory Board, the Rev. Johnnie Moore.

“I will never forget seeing @POTUS @realDonaldTrump slowly & in-total-command walk from the @WhiteHouse across Lafayette Square to St. John’s Church defying those who aim to derail our national healing by spreading fear, hate & anarchy,” Moore tweeted.