Chris Wallace is a registered Democrat who hosts “Fox News Sunday,” a child of two Jews who keeps a rosary by his bedside, a Washington wonk who has vacationed in Italy with George Clooney.

A son of the renowned correspondent Mike Wallace, he was schooled at Hotchkiss and Harvard and worked at NBC and ABC (including as host of “Meet the Press”) before landing at Fox News, an organization founded in part to bedevil the pieties of the Eastern establishment that had shaped him.

Presidents of both parties have regarded him with suspicion. Bill Clinton once accused him of having a “little smirk on your face,” Barack Obama avoided his program for eight years, and President Trump declared him “nasty & obnoxious” and a “Mike Wallace wannabe.”

All that is to say that Mr. Wallace, 72, is comfortable being a bit of an enigma. For every Trump loyalist who views him as a heretic, there is a liberal who wishes he’d denounce colleagues like Sean Hannity. (To be clear: He won’t.)

He broke ranks at Fox News by speaking out in December against Mr. Trump’s “direct, sustained assault on freedom of the press.” But he has also scolded mainstream journalists for showing an anti-Trump bias — “a big mistake,” in his words.

In an interview from his weekend home in Maryland on the shores of Chesapeake Bay, where he has been working remotely since March, Mr. Wallace was asked over Zoom if he experienced discomfort with the pro-Trump cheerleading spouted by Fox News’s opinion stars.

“Look, I work at Fox. Do I agree with some of the stuff I hear? Absolutely not,” said Mr. Wallace, who was hired by Rupert Murdoch and the network’s founder, Roger E. Ailes, in 2003. “In the end, I have decided that what matters to me is what I am allowed to do. And the fact is, in the 16 and a half years I’ve been at Fox News, I have never — by Roger Ailes first, now by the Murdochs — I’ve never been second-guessed on a guest I booked, a question I’ve asked.”

“I don’t pull punches, I’m not playing favorites,” he added. “That’s what matters ultimately to me.”

It is Mr. Wallace’s dual role as insider and outlier at Fox News that has made him an object of media fascination in the Trump era.

His occasional critiques of the administration are often met with rapture on Liberal Twitter, even as he recoils from what he sees as the showboating style of reporters like Jim Acosta of CNN. His restraint may be a throwback from his father’s heyday, but it can make Mr. Wallace’s appraisals all the more withering.

In recent weeks, he challenged the surgeon general, Jerome M. Adams, for playing down the risks of the coronavirus; pressed Treasury Secretary Steven Mnuchin on his “rosy predictions” for the post-pandemic economy; and mocked the administration’s defense of Michael T. Flynn, Mr. Trump’s former national security adviser. Last month, he castigated the president’s press secretary, Kayleigh McEnany, after she chided White House reporters at a briefing for questions she deemed irrelevant. 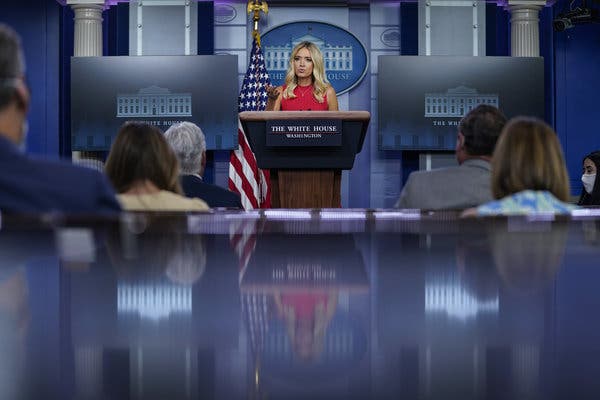 “I would have gotten up and walked out,” Mr. Wallace, who covered the Reagan White House for six years for NBC, said in the interview. “I don’t need somebody telling me what to say or what questions to ask.”

And yet Mr. Trump — who has turned Mr. Wallace into a regular piñata on Twitter, accusing the anchor of anti-Republican bias — remains susceptible to the Wallace allure. He granted Mr. Wallace lengthy interviews in 2016 and 2018, and the anchor would relish a reprise.

It would be another milestone for Mr. Wallace, who earned Fox News’s first Emmy Award nomination for a tense 2018 interviewwith President Vladimir V. Putin of Russia, and in 2016 became the first Fox News journalist to moderate a general-election presidential debate
~~~  CONTINUE  ~~~