Skip to content
The dust could even reach the Mid-Atlantic, including Washington. A cloud of Sahara dust blankets the city of San Juan, Puerto Rico. An expansive plume of dust from the Sahara is traveling westward across the Atlantic Ocean. (Ricardo Arduengo/AFP/Getty Images)
By Andrew Freedman and
Matthew Cappucci

A nearly 4,000-mile-long plume of thick dust from the Sahara Desert that arrived in Puerto Rico, Hispaniola and Cuba is forecast to move into the Gulf of Mexico, inland from Texas to the lower Mississippi River Valley Thursday and Friday, before reaching Washington this weekend.

The plume is part of a phenomena that develops every year off the coast of Africa, known as the Saharan Air Layer (SAL), but the current one is unusually intense and is setting records, scientists say.

The SAL typically forms over the Sahara Desert from the late spring into the early fall, and it moves in pulses out into the tropical North Atlantic every few days.

Hurricane forecasters closely track these outbreaks, because such air masses can prevent incipient storms from forming and choke existing storms, starving them of moisture, until they meet an early demise.

It is common for dust to be blown from the Sahara Desert in northern Africa and reach the Lesser Antilles and Gulf Coast, where it can cause captivating sunsets. But it is less common for such events to dramatically lower visibility and lead to air quality problems, which have occurred with this event.

Studies have found microbial life can hitch a ride on the SAL and land on the shores of Florida and waters of the Gulf of Mexico after a turbulent journey above the sea. In fact, research even suggests harmful algal blooms may follow such events due to the dust’s deposition of iron into the sea.

Where the dust has arrived

Strong winds blowing out from thunderstorms over the Sahel initially kicked up dust to an altitude of around 20,000 feet above the desert before it slipped westward, out to sea on June 14, according to Jason Dunion, a hurricane researcher at the National Oceanic and Atmospheric Administration.

On satellite imagery, the dust resembles a long appendage extending from the western edge of northern Africa, clear across the tropical Atlantic Ocean. The dust is divided into batches connected by thinner wisps.

The leading edge of the approaching Saharan dust cloud had made it to Antigua, part of the Lesser Antilles on Sunday, where its arrival was heralded by a milky translucent veil draped overhead.

Here is an amazing comparison with a near perfect day to today. Looking east over the #VCBirdAirport, #Antigua towards the Atlantic. You can barely see beyond 3 miles. 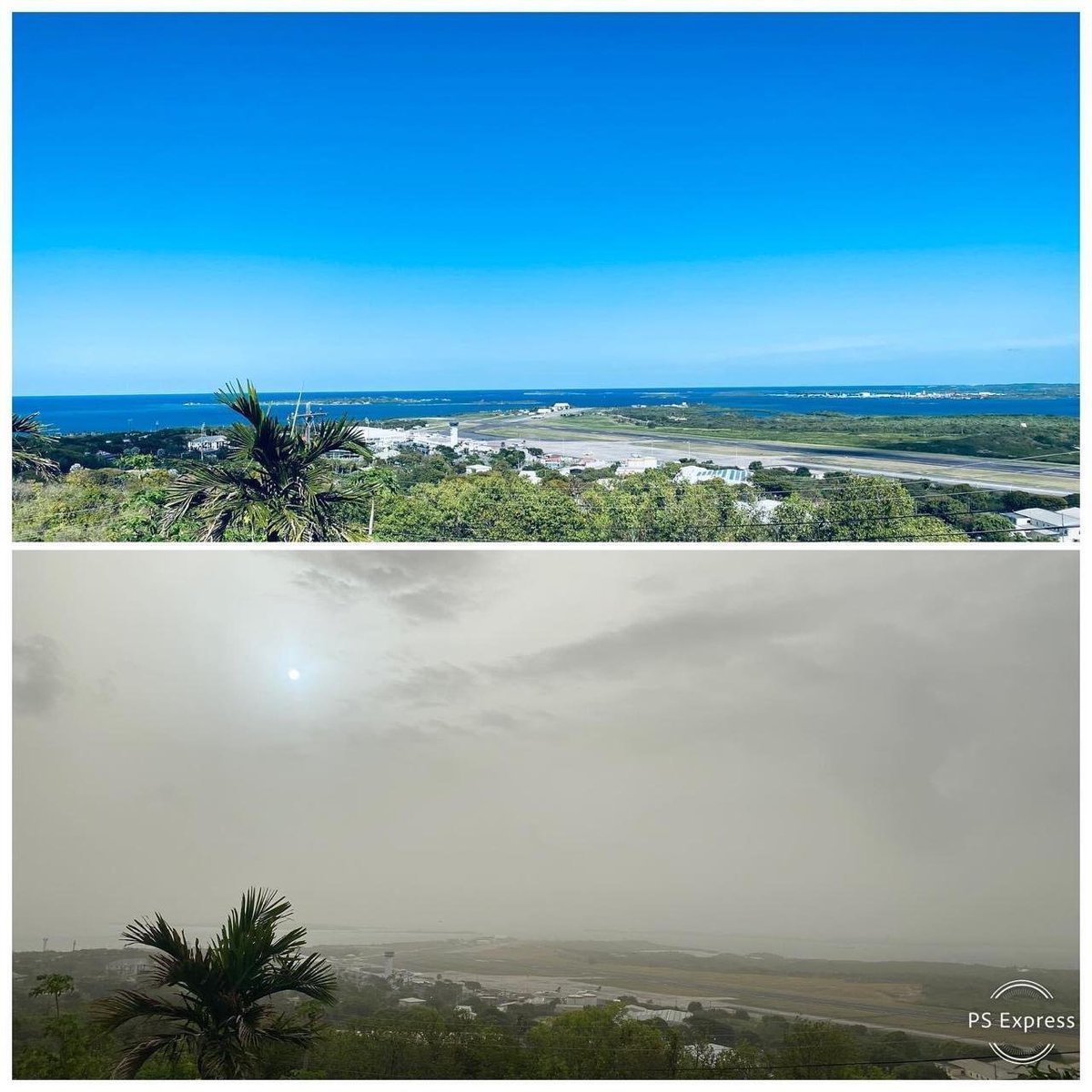 The high concentrations of fine particle pollution caused air quality levels to tank into the unhealthy range in many parts of the Lesser Antilles, where they have remained through Tuesday.

Visibility dropped to three miles at the St. Croix airport in the U.S. Virgin Islands and five miles in San Juan as dust caught up closer to the surface. That is unusual, since dust associated with SAL plumes typically stay higher in the atmosphere, where it does not interfere with surface visibility as much.