“100°F about 70 miles north of the Arctic Circle today in Siberia. That’s a first in all of recorded history. We are in a climate emergency.”

A small Siberian town north of the Arctic Circle reached 100.4 degrees Fahrenheit on Saturday, a figure that—if verified—would be the highest temperature reading in the region since record-keeping began in 1885.

“This scares me, I have to say,” environmentalist and 350.org co-founder Bill McKibben tweeted in response to news of the record-breaking reading in Verkhoyansk, where the average high temperature in June is 68°F.

“Siberian town tops 100 degrees Fahrenheit, the hottest temperature ever recorded north of the Arctic Circle. This scares me, I have to say.”
—Bill McKibben, 350.org

Washington Post climate reporter Andrew Freedman noted Sunday that if the reading is confirmed, it “would be the northernmost 100-degree reading ever observed, and the highest temperature on record in the Arctic, a region that is warming at more than twice the rate of the rest of the globe.”

“On Sunday, the same location recorded a high temperature of 95.3 degrees (35.2 Celsius), showing the Saturday reading was not an anomaly,” the newspaper reported. “While some questions remain about the accuracy of the Verkhoyansk temperature measurement, data from a Saturday weather balloon launch at that location supports the 100-degree reading. Temperatures in the lower atmosphere, at about 5,000 feet, also were unusually warm at 70 degrees (21 Celsius), a sign of extreme heat at the surface.”

The World Meteorological Organization said Sunday that is “preliminarily accepting the observation as a new extreme” as it conducts a more thorough review of the Verkhoyansk reading. 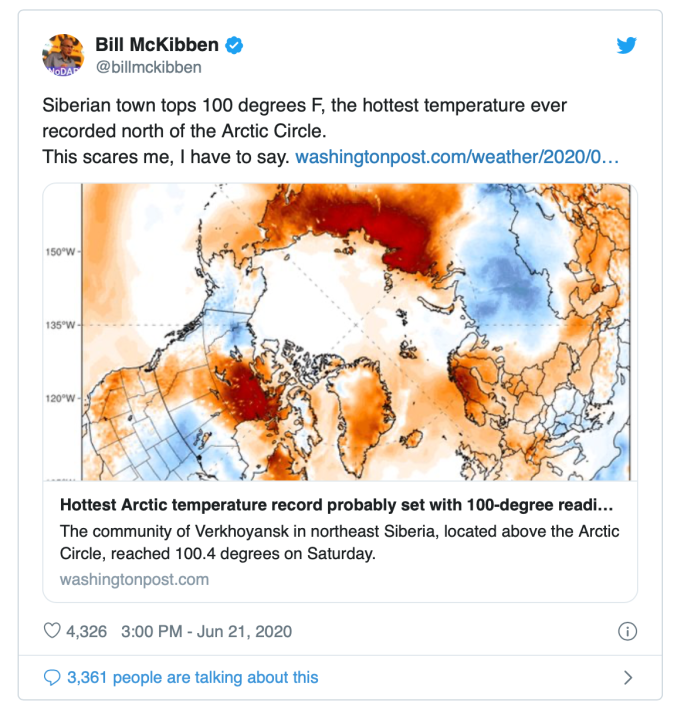 “100°F about 70 miles north of the Arctic Circle today in Siberia. That’s a first in all of recorded history,” tweeted meteorologist Eric Holthaus. “We are in a climate emergency.”

The reading comes as Siberia is in the midst of a prolonged heatwave that has alarmedclimate scientists and activists.

“Been watching the Siberian heatwave for months and it’s beyond terrifying—already suffering what was expected in 2100 in a worst case scenario,” said climate activist and conservationist Charlie Gardner.

As the Guardian reported last week, “the freak temperatures [in Siberia] have been linked to wildfires, a huge oil spill, and a plague of tree-eating moths.” 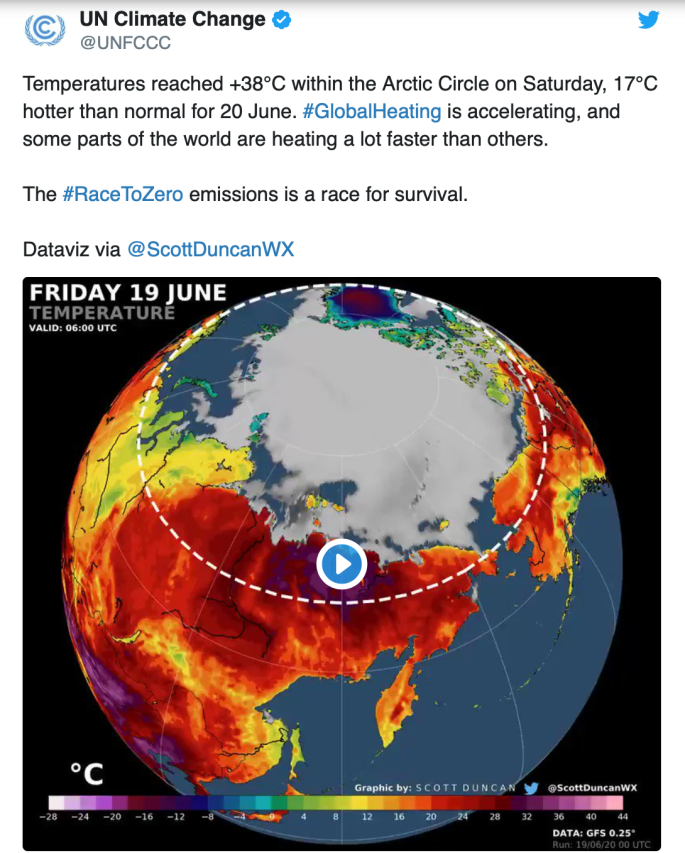 “Russian towns in the Arctic Circle have recorded extraordinary temperatures, with Nizhnyaya Pesha hitting 30°C on 9 June and Khatanga, which usually has daytime temperatures of around 0°C at this time of year, hitting 25°C on 22 May. The previous record was 12°C.”