In this series for T, the author Reggie Nadelson revisits New York institutions that have defined cool for decades, from time-honored restaurants to unsung dives.

On Nov. 21, 1934, Ella Jane Fitzgerald appeared at the Apollo. It was the Harlem theater’s first amateur night, and Fitzgerald was just 17. Her friends had dared her. “They said, ‘Well, if you don’t go, you’re chicken,’” she would later recall in a 1978 television interview with the pianist and composer André Previn. She had originally entered the show to dance, but after watching the Edwards Sisters’ dazzling tap-dancing act from the wings, she told him, “I said there’s no way I’m going out there and try to dance.” As she stood awaiting her cue, the M.C. told her, “Just dosomething.”

THE T LIST |
Sign up here for T’s newsletter, a weekly roundup of what our editors are noticing and coveting now.

In a raggedy dress and workman’s boots, Fitzgerald, who was then homeless and living on the streets of Harlem, looked out at the 1,500-seat theater with its glittering chandeliers and glamorous crowd. Designed by the American architect George Keister, the neo-Classical music hall was built for burlesque performances in 1914, when Harlem was largely white and African-Americans were not allowed in, but in 1933, Mayor Fiorello La Guardia cracked down on burlesque, and the following year the theater was transformed into a venue for variety revues. Harlem was 70 percent black by then, and the Apollo, on 125th Street, now open to black performers and audiences, became “monumental,” as the legendary Motown singer, writer and producer Smokey Robinsondescribed it to me. “In the lobby,” he said, “there’s a mural with people I had grown up hearing about: Sammy Davis Jr., Sarah Vaughan, Count Basie, Duke Ellington — and Ella Fitzgerald, of course. When I made it on that wall, I felt I had really made it, because the Apollo is the Apollo.” 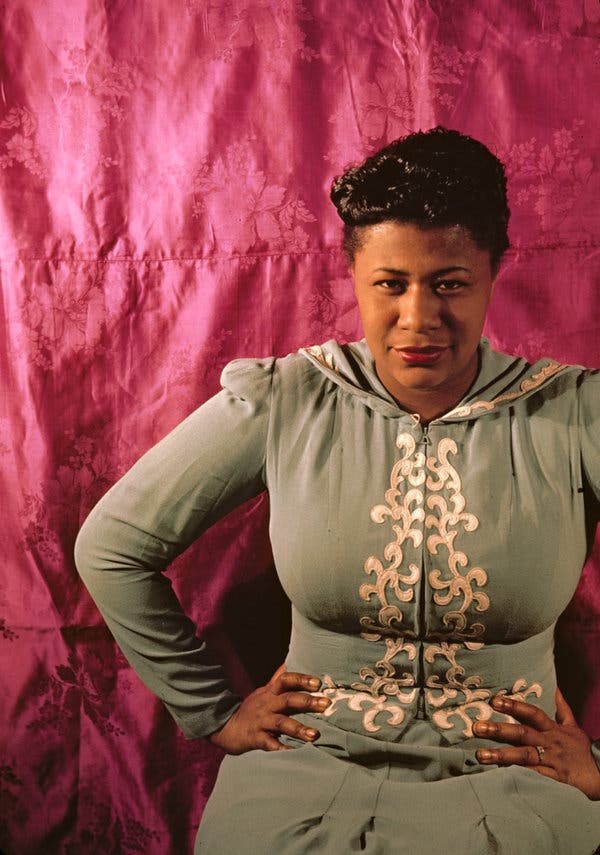 The iconic dancer and choreographer Norma Miller, a contemporary of Fitzgerald’s who later made her name as a Lindy Hopper at Harlem’s Savoy Ballroom, was there for Ella’s debut. “We were a bunch of rowdy teenagers in the balcony ’cause they were introducing somebody we didn’t know,” she told me in 2018, when I was working on a documentary about Fitzgerald (“Ella Fitzgerald: Just One of Those Things,” which will be available to stream on Eventive starting June 26). “Can you imagine?” she said. “We booed Ella Fitzgerald?”

Fitzgerald, who had never performed in public before, stepped forward and began not to dance but to sing. She chose “Judy” (1934), by the great singer and songwriter Hoagy Carmichael, and suddenly, as she later recalled to Previn, “everybody says, ‘Oh, that girl can sing.’”

“We heard a sound so perfect,” said Miller. “She shut us up so quickly, you could hear a rat piss on cotton.” Within a few months, Ella was a star, singing with Chick Webb’s band at the Savoy on 142nd Street, where the crowd roared for the teenager who could play around with the band and swing like nobody else.

When I met Miller at the Apollo two years ago, Ms. Norma, as everyone called her, arrived wearing a sequined tuxedo jacket. Singing, Miller recounted, “You went through these doors and you were aware you were in … Harlem, Harlem.”

“Everything was race,” she went on to say about the neighborhood, where she was born and raised in the 1920s and ’30s. “You couldn’t go to Woolworth across the street from the Apollo,” she said. “If you wanted to buy a hat, you couldn’t try it on. They wouldn’t have black girls on the cash registers, you couldn’t go out of your zone. You can’t work for nobody — remember, slavery is over, but you don’t have jobs. So the confinement meant you had to do it yourself. How do you pay the rent?” In the 1920s, Miller’s mother would host rent parties where people would pay 50 cents for pig’s feet, potato salad and a place to drink and mingle. Dancing in her mother’s living room was the beginning of Miller’s career, and she subsequently performed at the Apollo and toured the country, including with Fitzgerald.

“Just as the theater itself is in the geographical epicenter of Harlem, the Apollo has always been ground zero for every major development in African-American vernacular music,” says Will Friedwald, the jazz writer and author of a new biography about Nat King Cole, “from swing bands in the 1930s, to bebop and R&B in the ’40s, gospel and soul in the ’50s and ’60s, followed by funk, reggae, rap, hip-hop and every sound that has come since.”

Painstakingly restored in 2017, with red plush seats and gilded balconies, the Apollo is somehow both dynamic — in 2018, it debuted a stage version of Ta-Nehisi Coates’s 2015 book “Between the World and Me” — and drenched in nostalgia. Sitting near the stage today, I imagine hearing James Brown, who recorded his most mythic album here, and of course Fitzgerald, who played the theater too many times to count.