KREMMLING, Colo. — For months, Democrats have figured that Colorado’s U.S. Senate race, a linchpin of their strategy to take back the majority in November, was essentially in the bag, with the Republican incumbent Cory Gardner trailing by double digits behind their candidate John Hickenlooper, the well-liked and well-known former two-term governor and Denver mayor.

But Mr. Hickenlooper, who was coaxed into the Senate contest after ending his brief presidential run, has faltered in recent weeks ahead of the primary race on Tuesday. He now finds himself in a tougher-than-expected contest with Andrew Romanoff, a former state House speaker and another longtime Colorado political presence, in a fight with significant implications for the general election and control of the Senate.

At a time when Democrats sense fresh momentum for flipping the Senate amid national crises that have tarnished President Trump and threaten to drag down Republican candidates, Mr. Hickenlooper’s shaky primary performance has been a rare dark spot in an otherwise brightening landscape. Democrats would have a difficult time capturing the majority without a Centennial State victory.

“He has had a bad June,” Kyle Saunders, a political-science professor at Colorado State University, said about Mr. Hickenlooper’s multiple travails and missteps. Chief among them was a contempt finding by the state’s independent ethics commission for defying a subpoena to appear at a hearing on a complaint against him — an event that prompted disastrous news coverage across the state.

Experts still expect Mr. Hickenlooper to win the primary — though perhaps not by the margin initially anticipated — and a recent pollfound him with a commanding lead over Mr. Romanoff even as ballots are being cast under Colorado’s vote-by-mail system.

But Democrats worry that his rockier-than-expected race may leave him weakened for the general-election fight and give Mr. Gardner new life in a campaign where he was a rare incumbent underdog.

“He is limping out of this primary and now has a vulnerability that didn’t exist several weeks ago,” Dick Wadhams, a former state Republican Party chairman and veteran Senate campaign strategist, said about Mr. Hickenlooper and his run-in with the ethics panel.

The unexpected volatility of the primary — and the chance to inflict additional damage on Mr. Hickenlooper — has generated a last-minute surge of campaign advertising as national Republicans, Mr. Gardner and Mr. Romanoff have ganged up on Mr. Hickenlooper from the right and the left, while national Democrats and an independent group have swooped in to defend the former governor in the primary’s closing days. Millions of dollars are being spent.

Mr. Hickenlooper’s troubles go beyond the ethics complaint, which accused him of having improperly accepted private jet and limousine rides as governor.

In a series of forums and debates with his opponent, Mr. Hickenlooper, 68, made several eyebrow-raising statements. He said that George Floyd, the black Minneapolis man who died after a police officer knelt on his neck, had been shot. In response to a question about the Black Lives Matter movement, Mr. Hickenlooper said that every life matters, a comment considered dismissive of legitimate black grievances. He later acknowledged that he fumbled his response.

Then a six-year-old video surfaced of Mr. Hickenlooper comparing the rigors of a politician’s schedule to working on a slave ship, a remark critics cited as painfully insensitive. He again apologized.

Months earlier, in rejecting appeals to run for the Senate rather than president, Mr. Hickenlooper said multiple times that he was not cut out for the Senate and could not see being very good at it, only to turn around and join the race after getting no traction in his White House bid.

Allies of Mr. Hickenlooper say he has always lacked the verbal discipline of a typical politician — and that is part of the quirky, authentic personality that voters have come to appreciate and admire.

“Colorado voters know John Hickenlooper really, really well,” said Melissa Miller, a campaign spokeswoman. “What people really like about him is he is a real guy. He is not a slick, talking-point politician.” (The campaign declined to make Mr. Hickenlooper available for an interview.) 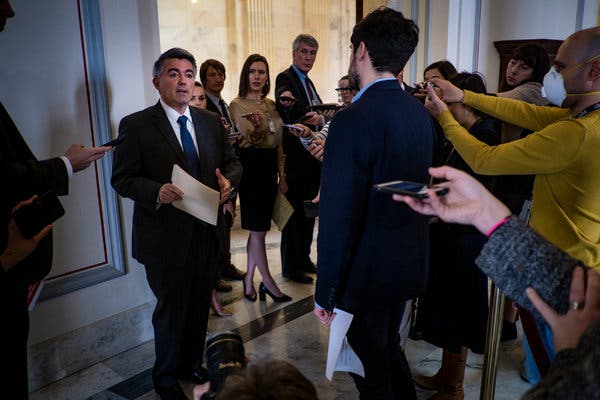 Mr. Hickenlooper’s gaffes would have provided negative campaign fodder in any event, but the biggest error came in his handling of a complaint filed by Republicans in 2018 that accused him of improperly taking gifts and private jet trips as governor.

Subpoenaed to testify on June 4 in a virtual hearing because of the pandemic, Mr. Hickenlooper and his legal adviser instead argued for a delay so he could appear later in person without the distractions and glitches of an online proceeding. He was then a no-show for the teleconference and the ethics commission held him in contempt, setting off a wave of negative coverage that made it appear as if he was not taking the complaint seriously.

Chastened, Mr. Hickenlooper testified the next day, defending the trips as either personal business or efforts to promote Colorado. But the commission eventually fined him $2,750 for two violations and refused to vacate its contempt finding.

National Republicans, who were always planning to hit Mr. Hickenlooper on the ethics question, accelerated their planned post-primary advertising to take advantage of the furor and aired a spot that rounded up news coverage hammering the former governor.

“We did it because of how badly Hick was mishandling the ethics hearing,” said Kevin McLaughlin, head of the National Republican Senatorial Committee. “He and his team were bumbling idiots, and we felt like we couldn’t let the opportunity pass.”

Mr. Romanoff, who lost a Denver-area House race in 2014 and a primary battle for the Senate in 2010, has also taken Mr. Hickenlooper to task on the ethics issue, drawing rebukes from other Democrats who have urged him to drop the attacks.

By embracing “Medicare for all” and the Green New Deal, Mr. Romanoff has sought to contrast himself with Mr. Hickenlooper’s more moderate image and tap into the growing progressive bloc of Colorado Democrats who helped Senator Bernie Sanders of Vermont win the state’s presidential primary this year with 37 percent of the vote.

“We haven’t detected any enthusiasm for his candidacy, including from him,” Mr. Romanoff said in an interview. “I just think it has been an appalling performance. There is nothing he has done in this campaign to convince me that he was wrong when he said he would be a terrible senator.”

Hoping to counter Mr. Romanoff’s criticism and a perception in some Democratic circles that he is out of step with the state’s evolving Democratic electorate, the Hickenlooper campaign has touted endorsements from Washington figures such as Senators Elizabeth Warren of Massachusetts and Cory Booker of New Jersey, both of whom joined Mr. Hickenlooper in the presidential primary field.

“I feel like the momentum has changed in the last few days,” Mr. Hickenlooper said in a local television interview that aired on Friday, crediting the national endorsements and a rush of local and state Democrats who switched their backing from Mr. Romanoff to him after an attack ad from his rival.

“To do this job, you probably need to want this job,” a smiling Mr. Gardner says at the end.

Republican strategists say they believe that Mr. Gardner, a polished campaigner who led the party’s Senate campaign organization in 2016, could hold off Mr. Hickenlooper given the weaknesses the former governor has displayed in the primary.

Yet even with Mr. Hickenlooper’s troubles, Democrats and analysts say that Mr. Gardner’s fate is tied to that of Mr. Trump, who lost the state in 2016 to Hillary Clinton and is trailing former Vice President Joseph R. Biden Jr. in polls here.

They say that Mr. Gardner, who early on endorsed the president for re-election, has not done enough to separate himself from Mr. Trump, who was an anchor on the senator’s campaign even before the president’s most recent decline in popularity.

“There is too much drag on him from the president and it is getting even worse,” said Floyd Ciruli, a longtime pollster and Colorado political analyst. “I just have a hard time seeing Cory being able to beat that tide.”