Monsoon forecast from Joe Ramey and NOAA for southwest Colorado 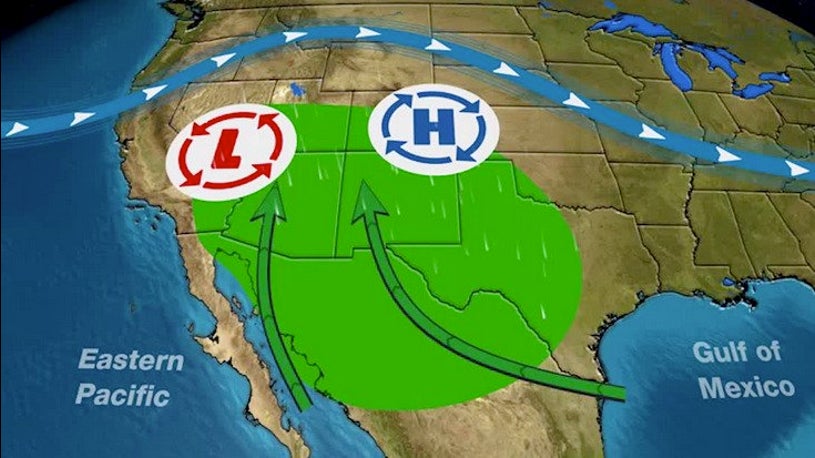 The rain is needed. But what comes with it could be more harmful than beneficial.

Monsoon season in the Southwest is here, but relief from the hot and dry conditions are not expected until later this summer.

Monsoon season starts June 15 in the southwestern U.S., according to NOAA and lasts through Sept. 30. However, in most of the region, it doesn’t really kick in until late June or early July.

So what do we mean by monsoon season?

A monsoon is a change in seasonal winds. This occurs in the Southwest each summer when a thermal low develops due to intense heating of the land, but large bodies of water nearby do not warm as quickly. In addition, a ridge of high pressure builds over the Rockies or Plains.

Eventually, pressure differences between the warm land and cooler water cause more humid air from the Gulf of California and the Gulf of Mexico to be drawn toward the Southwest. This flow from moist ocean waters is a change from the usual flow from land areas to the ocean waters.

The result is thunderstorm development.

Rain from these thunderstorms causes humidity to increase which triggers more storms. This cycle continues until early fall when the land finally cools and water temperatures reach their peak warmth, which reduces the pressure difference. As a result, the onshore moisture flow lessens. Occasional breaks in this pattern do occur during the season and the rainfall is not continuous.

Hot and dry conditions, with low humidity, prevail in June before monsoon season really gets going.

Wildfire activity is expected to be above average in much of the Southwest into July before monsoonal rain lowers the risk.

What Does the Monsoon Bring?

In Phoenix, the average onset of monsoon is July 7 or when the dew point is 55 degrees or higher for three consecutive days.

In addition to Arizona, portions of six other states are typically impacted by the Southwest monsoon: New Mexico, Nevada, Utah, Colorado, Texas and California.

The increase in monsoonal moisture ignites scattered showers and thunderstorms across the region during the summer.

This moisture reduces the risk of wildfires and brings much-needed rain to the region for reservoir replenishment and vegetation. Most of northwestern Mexico and the southwestern U.S. receive over half of their annual precipitation from the monsoon.

Flash flooding is the leading thunderstorm-related killer and most flash flood deaths occur in vehicles. Never drive through flooded roadways. Lightning also causes injuries and fatalities every year in the United States.

Downbursts are another concern that can result in an outward burst of damaging winds at the ground. Outflow boundaries created by strong thunderstorm downburst winds can cause blowing dust and potentially dust storms, which can significantly and quickly limit visibility.

The amount of relief from the dry and hot conditions the monsoon brings varies from year to year.

For example, last year the monsoon was the ninth driest and third hottest on record for the Southwest, since 1895. This was due to an unfavorable mid-level weather pattern, a decrease in tropical activity in the eastern Pacific and a lack of moisture spreading northward.

Arizona and New Mexico receive up to half of their annual rainfall during the summer monsoon (Figure 1). The monsoon season suppresses much of the hot summer temperatures, replenishes water resources, and nourishes the vegetation. The monsoon arrives with much flash and fanfare, with its trademark thunderstorms and flooded streets in southwestern cities. Monsoon rainfall events tend to be short and spotty, with intense, local storms drenching some neighborhoods but not others. The water the storms bring quickly flows off the landscape into streets and rivers, with much of the remnant moisture evaporating in the summer sun.

The monsoon is driven by the sun heating up the land and the Pacific Ocean at different rates, with land surfaces warming more quickly than the ocean. The warm land creates low-pressure zones as hot air rises. Once this pattern establishes across the region, the winds shift to fill in the vacuum. With this shift in the winds, the monsoon begins in northern Mexico in May. The moisture-laden monsoon air travels north to Arizona and New Mexico, encouraged by the pressure difference between the hot, parched southwestern air and the cooler Mexican air. In 2008, National Weather Service officials decided to consider June 15–September 30 as the U.S. Southwest monsoon season in Arizona, although the thunderstorms that bring the rain may form in different times and places across the region.

The monsoon’s driving rains are most dramatic in southeast Arizona and in western New Mexico, tapering off in Phoenix and Yuma, AZ (Figure 2). In addition to being variable in space, some years produce weak monsoons, while others provide ample rain. There are no evident trends in annual monsoon strength, making it difficult to predict. This variable tendency has been consistent over the past 100 years when record keeping generally began.

A number of factors affect the monsoon. El Niño–Southern Oscillation (ENSO) can have a strong impact, with El Niño events often bringing more moisture up from the Gulf of Mexico. Changes in tropical Pacific convection and temperature patterns in the Midwest are also factors that can influence the summer monsoon.

Along with the relief that the summer monsoon provides to the region, it also brings flash floods, dust storms, strong winds, lightning, and dangerous fires that can harm people and property. In the Southwest, lightning has ignited more than 2,300 fires annually since 2001, burning approximately 277,000 acres per year. For much of the Southwest, the monsoon season sparks the fire season but also can bring the fire season to a close after the first few weeks of rainfall.

The monsoon brings rains that can help reverse the downward draw from reservoirs; it is also important to farmers who depend on natural rainfall. The monsoon fuels the growth of summer grasses, which can make or break southwestern ranchers struggling to eke out a living in harsh desert lands. Southwest summers can be especially harsh in years when the monsoon falters, leaving shriveled plants and baked soil in its wake.

One thought on “Monsoon Season Kicks Off This Week in the Southwest, But It Won’t Bring Relief Until Later This Summer”