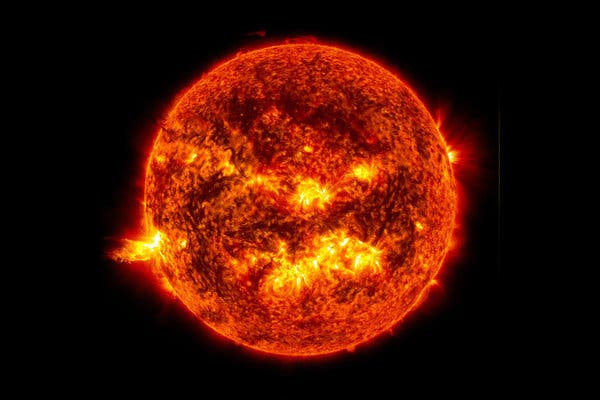 On Saturday, Earth will swing toward the outermost point in its orbit, known as aphelion. You, me and everyone on the planet will be three million miles farther from the sun than when we are closest to it.

The change occurs because our planet’s orbit is not perfectly circular. Instead, it is squashed into an ellipse with the sun offset from the center — an effect that causes Earth to orbit to its farthest point every July and its innermost point, or perihelion, every January (the exact dates vary slightly from year to year).

So, while record-breaking temperatures and raging wildfires in the Northern Hemisphere might lead you to believe the sun is punishingly close right now, remember that it is just the opposite. In fact, the extra distance causes the amount of received sunlight to drop by 7 percent compared to January.

But don’t expect any relief from summer. Seasons on Earth are the product of changes in the amount of direct sunlight as the planet tilts toward and away from the sun — not its orbital path. It would take a much greater swing, so that the amount of received sunlight dropped significantly, in order to notice the difference.

To consider what life would be like on a planet under these orbital circumstances, you only have to look as far as Mars, whose elliptical orbit causes the amount of received sunlight to vary by as much as 31 percent over the course of the planet’s year.

“I find it amusing that the common misconception about Earth’s seasons is actually true if you are on Mars,” said David Grinspoon, an astrobiologist at the Planetary Science Institute. “School children on Mars will need to be taught differently.” 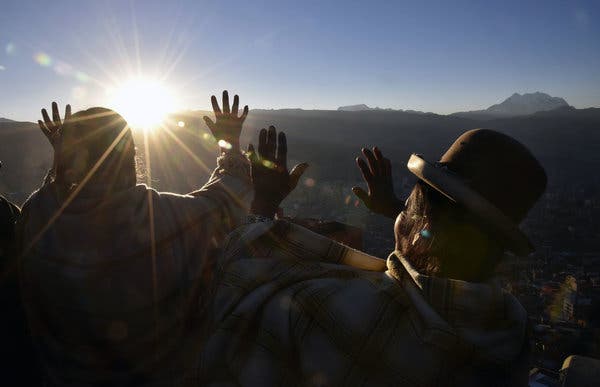 Just like Earth, Mars swings toward the frigid outer solar system at the peak of its Northern Hemisphere’s summer and its Southern Hemisphere’s winter. But because that swing is so much more dramatic, the plunge in sunlight creates a milder northern summer and a downright frigid southern winter. Later, Mars snuggles up close to the sun, leading to a milder northern winter and a simmering southern summer.

“It’s like toasting your marshmallow slowly from a safe distance above the campfire, then swooping in close for the nice quick char,” said Tanya Harrison, a planetary scientist at Arizona State University, referring to that southern summer.

In short, the planet’s dramatic orbit moderates the swing between seasons in the north but exaggerates it in the south.

The effect is so strong it can even be seen through a backyard telescope. The Red Planet’s polar ice caps, for example, grow in the winter and shrink in the summer. But because the southern winter is far more extreme than the northern winter, the southern polar ice caps grow more than twice as far as their northern counterparts.

On the flip side, that sizzling southern summer gives rise to winds so strong they rip dust off the Martian floor and into the atmosphere. That can kick-start dust storms that grow so large they envelop the entire planet, much like the one currentlythreatening NASA’s Opportunity Rover.

What’s more: Not only does such a squashed orbit cause an asymmetry in the strength of the seasons, but also in their length. As a planet edges toward the outermost point in its orbit, it will slow down significantly. Then, it will pick up speed as it starts to fall back toward the sun. That means that while those Martian southern summers are intense, they’re also roughly 30 days shorter than northern summers.

Still, the change in seasons on Mars is not as dramatic as it could be.

“Martians feel their change in orbital distance much more distinctly than Earthlings do,” said Richard Binzel, an astronomer at the Massachusetts Institute of Technology. “But the Plutonians have it even worse.”

The dwarf planet’s orbit is even flatter than Mars’s orbit, causing the sunlight to vary by as much as 64 percent. That said, during Pluto’s nearly 250-year-long orbit around the sun, its closest approach occurs during its spring and fall, when added sunlight has a less pronounced effect than during a hemisphere’s summer. But that wasn’t always the case. Because of fluctuations among the planets across our solar system’s eons, Pluto’s closest approach steadily shifts across the seasons.

Just under 1 million years ago, Pluto nestled up closer to the sun during its northern summer. The two effects conspired to create a “super season” where temperatures were so warm that liquids of methane and nitrogen could have flowed across its frigid surface. “That is a very hot day on Pluto,” Dr. Binzel said. Signs of these flows were detected by NASA’s New Horizons spacecraft when it studied the planet in 2015.

And while the planet has cooled over the last 900,000 or so years, it will reach another super season in another 900,000 years when the planet’s Southern Hemisphere tips toward the sun at the exact point it swings closest.

But given Earth’s relatively circular orbit, it will never have super seasons like those on Pluto or the extreme, asymmetric seasons of Mars. Instead, our planet will stay relatively stable — a characteristic that just might have given rise to life.