When James and Meg Wilson began working from home in March, they realized their house in Oakland, Calif., would need a proper home office in a hurry. Mr. Wilson, 36, works in finance, and Ms. Wilson, 36, is a nurse practitioner engaged in telehealth.

“And we have a little guy at home,” Mr. Wilson said, noting that work can be a challenge when their 1-year-old son, George, is running around. “For a few weeks, we were just all on top of each other, trying to juggle working from the dining room table and his bedroom.”

They thought about building an addition, but knew that would be disruptive, expensive and time-consuming. Browsing online, they found what seemed like a better option: an inhabitable shed from Studio Shed, made of prefabricated panels, which could be built, shipped and assembled in their backyard in a matter of weeks.

After exploring the options on Studio Shed’s website and talking to one of the company’s designers, they settled on a 100-square-foot model with an angled, flat roof, a glass door, transom windows and charcoal-colored, fiber-cement siding. Inside, the shed would be finished like a house, with insulation, drywall, electrical wiring and laminate flooring — yet it was so small that it wouldn’t require a building permit. 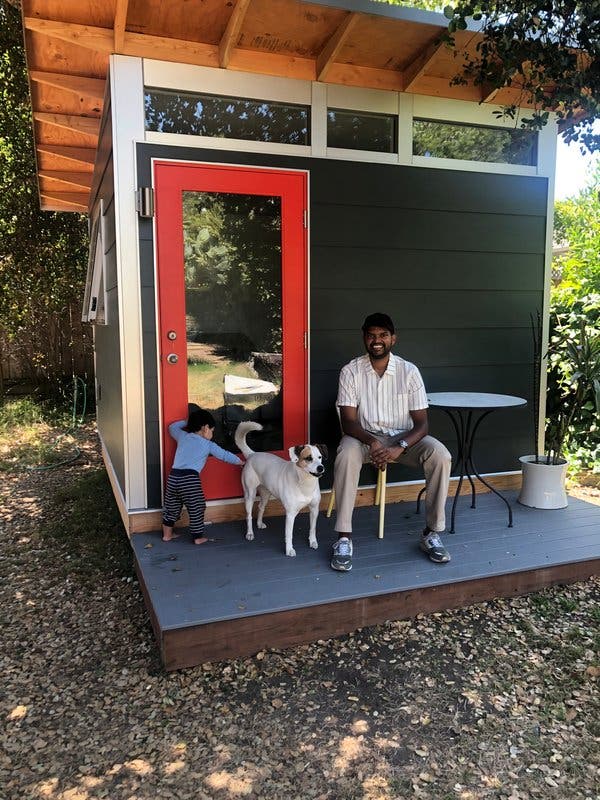 The components were made in Louisville, Colo., shipped to Oakland and assembled in a few days on a pier foundation by workers from Blue Rock Home, one of Studio Shed’s general contractor partners, who also dug a trench to run electricity from the Wilsons’ house.

“From the time we hit ‘order’ to the time the shed was installed was a little over four weeks,” said Mr. Wilson, who put the total cost at $31,000.

The Wilsons have been using their home-office shed since late April, and expect to be working from home, at least part of the time, well into the future. “It’s given us a lot of flexibility. I can make calls from here late night or early in the morning,” Mr. Wilson said, without worrying about waking up their toddler.

Of course, the Wilsons aren’t alone in trying to find work-life balance at a time when both work and life now happen at home for many. Millions of people are in the same space-constrained situation, where it’s often difficult to find a dedicated space to focus on work. As a remedy, a growing number of people lucky enough to have a backyard are finding their way to companies like Studio Shed, Kanga Room Systems and Modern Shed, which build small stand-alone structures that promise a little separation.

Since the pandemic struck, Studio Shed’s sales have taken off, said Mike Koenig, the company’s president. “Things just got really fast after Covid-19.” 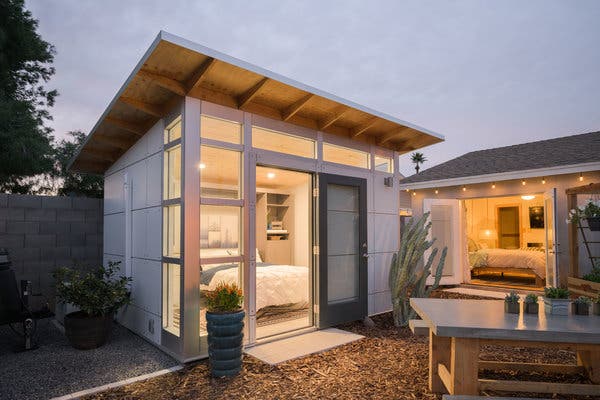 To keep up, he said, Studio Shed expanded its work force from 28 to 38 people. The company’s units start at about $10,000 for a basic shell and increase in cost based on material choices, interior finishes and installation.

“When we started, we wanted it to be like Legos for adults, where you wouldn’t need any special machinery to get it into your yard,” Mr. Koenig said. “We’ve had units that have been helicoptered into a remote island in Alaska, and we’ve done rooftops in Chicago and New York, where it goes up the freight elevator.”

Kanga Room Systems, in Waco, Texas, which manufactures both prefabricated, shed-size units and full-size cottages, has seen a similar uptick in interest in its smallest units, which it calls Kwik Rooms. The units start at about $5,000 for an 80-square-foot, assemble-it-yourself kit, and rise in price based on size, finishes, features and installation.