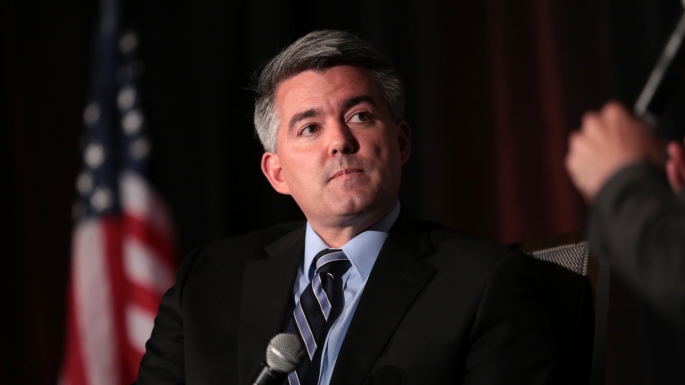 Sen. Cory Gardner is calling for a Republican group to take down a television ad that invokes the deadly 2017 home explosion in Firestone to attack former Colorado Gov. John Hickenlooper’s record on oil and gas.

The Republican U.S. senator says he spoke to Erin Martinez on Tuesday, who survived the blast that killed her husband and brother, and afterward released a statement condemning the ad.

“I spoke to Erin Martinez (Tuesday) and expressed to her that I would not have personally run the ad, and I hope the ad comes down,” Gardner said in a written statement. “If I had the power to take down the ad, I would.”

The National Republican Senatorial Committee, the GOP U.S. Senate campaign arm, said Wednesday that it won’t take its ad down. Politico first reported that Gardner is calling for the spot to be pulled.

Last week, when the ad was unveiled, Gardner’s campaign declined to comment after Martinez called the ad “horrifying.” She said it disgraces the memory of her husband, Mark Martinez, and brother, Joey Irwin.

“While I am glad that Sen. Gardner has finally realized the ad should be taken down, I am sorry that it has taken him and his staff more than four days to respond to my phone call and request for some relief for my family,” Martinez said in a statement this week. “Our family’s trauma should not be the subject of a horrible political ad. We have worked very hard to create a positive legacy for my husband Mark and my brother Joey to ensure no one relives our nightmare.”

She added: “Sen. Gardner underestimates his power to have the ad taken down if he publicly speaks forcefully to make it happen. After talking to him, I wonder if he really understands the harm the ad has inflicted.”

Gardner’s campaign said it received a message from Martinez and called her back the same day.

The 30-second ad accuses Hickenlooper of not doing enough to respond to the 2017 explosion, which was caused by a pipeline that was severed during construction of the Martinez home. The pipeline was attached to a well that was dormant until a few months before the incident. When it was restarted, raw natural gas leaked into the house and then ignited.

The well was owned by Anadarko Petroleum, an oil and gas company that has since been acquired by Occidental Petroleum. Anadarko was hit with an $18.25 million fine because of the blast.

The ad does not name Martinez’s family, but it does use graphic images of their home engulfed in flames. Erin Martinez has become a leading advocate for drilling safety in Colorado and was a key player in the 2019 passage of Senate Bill 218, which rewrote the state’s oil and gas regulations.

Both Hickenlooper, a Democrat, and Gardner have faced criticism for their ties to the oil and gas industry. Anadarko’s political action committee has donated $10,000 to Gardner’s 2020 reelection effort, according to the Center for Responsive Politics.

Hickenlooper, too, has called for the ad to be taken off the air.

The NRSC is one of the biggest outside spenders aiding Gardner’s tough 2020 reelection bid. It has booked or spent $4.9 million in Colorado for the election cycle, including $1.3 million this month alone.