THE NAVAJO NATION — When Summer Brown lived in Phoenix, she had no problem finding fresh produce. If the Sprouts supermarket near her home didn’t have what she was looking for, she would just drive somewhere else.

This winter, Ms. Brown, an enrolled member of the Navajo Nation, moved back to her childhood home in Cornfields, Ariz., to start a small business as a leatherworker. Now, healthy food is harder to find for her two children, Paisley, 6, and Landon, 7. The entire Nation, which stretches 27,000 square miles across Arizona, New Mexico and Utah, has fewer than 15 grocery stores.

“The pickings are kind of slim here,” said Ms. Brown, 31. “It’s a lot of processed foods, and I try not to feed my family that.”

Even before the coronavirus pandemic dealt an exceptionally brutal blow to the Navajo — who call themselves the Diné, which means “the People” — Ms. Brown wanted to grow her own food. She spent last winter collecting seeds from Indigenous seed banks and researching Indigenous methods. Her small garden is already feeding her family, and she is looking forward to the fall harvest.

Her backyard garden isn’t meant just to replace a trip to the grocery store. Ms. Brown is part of a movement for food sovereignty, a global effort to give people control of their food supply and nutrition. It is a public health endeavor, an economic reclamation, an environmental protest and for many, a spiritual quest. Gardeners aim to grow healthy foods that are connected to their traditions, and to revive old methods of cultivation. 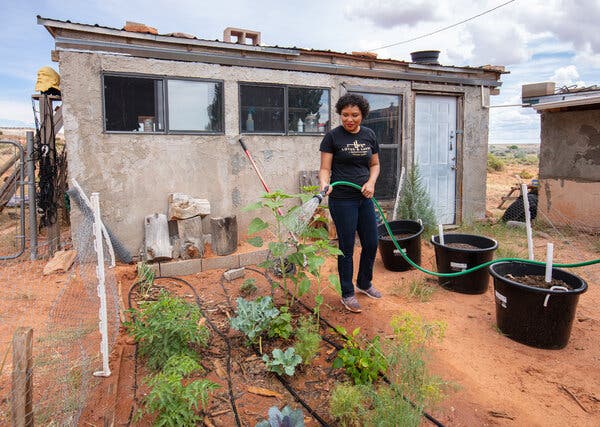 “I want to show the whole Navajo Nation, and even off the reservation, that you can live with the earth and you don’t have to rely so much on the outside to feed yourself,” Ms. Brown said. “We have all this land. We should be able to just go outside and get our food.”

The small gardens and cornfields rising across the Nation (which the Diné call the Dinétah) are attempts to correct legacies of historical wrongs. Once, the Diné were prosperous gardeners, hunters and stewards of the land. Then the United States government colonized the land and displaced the Diné in the mid-1800s, during what is now known as the Long Walk, to an internment camp at Fort Sumner, N.M. Livestock were killed off. Fields were trampled. And some orchards were lost forever.

Those and other attempts to divorce the Diné from their land and ancestral foodways have also left them vulnerable to the pandemic. Across the United States, Indigenous nations have suffered outbreaks that often appear to be more devastating than those in surrounding cities. But data gaps, population fluidity and under-testing make the scope of infections hard to quantify.

One thought on “For the Navajo Nation, a Fight for Better Food Gains New Urgency ~ NYT”