The residents of Garberville, Calif., didn’t know what to make of 15-year-old Mike Radenbaugh and the odd motorized bikes he was concocting in his family’s garage.

It was 2005, the home-brew era for electric vehicles, and there he was, a high school freshman zooming by at up to 35 miles an hour, not even pedaling. He seemed to defy gravity as he ascended the region’s steep winding roads lined with 300-foot redwoods.

As the captain of the school’s mountain-bike racing team, he had collected a heap of spare frames and parts. Mr. Radenbaugh started tricking them out with old motorcycle-starter batteries, moped motors mail-ordered from Japan and crude powertrains held together with bungee cords, pipe clamps and thick layers of electrical tape. “I needed to find a solution where I had freedom as a young person without a lot of dollars,” he said.

Before long, he was making his 16-mile school commute on his electric Frankenbike.

Wires fried and batteries died. But after six months of experimentation, Mr. Radenbaugh had a semi-reliable electric bike. “It got better and better. And it got faster,” he said. “All of a sudden, I’d be riding into town passing slow cars. I quickly became known as the kooky e-bike guy in my little hometown.”

By his junior year, he’d founded Rad Power Bikes. Now based in Seattle, his company approached $100 million in sales in 2019. It has sold over 100,000 electric bikes. Numbers aren’t well reported for this young industry, but Rad Power Bikes is widely considered the largest e-bike seller in the United States.

When he was starting out in Humboldt County — home to back-to-the-landers and backwoods pot farmers — Mr. Radenbaugh fielded requests. “They wanted high handlebars, comfortable seats, powerful motors and long range,” he said. In other words, a blend of a bicycle, moped, scooter and motorcycle. This was in contrast to the few light and low-powered European and Japanese e-bikes available a decade and a half ago.

And that was before a pandemic sent the whole country searching for a socially distanced way to get around. Throughout spring 2020, Rad’s sales tripled compared with the year before. Many models now have a three-month wait for delivery. What had been a niche product for Humboldt’s aging hippies heading to Burning Man has become a mainstream option for Everyman.

Guidehouse Insights, a market research firm, conservatively forecasts that electric bike sales in the United States will grow to nearly a million by 2023, up from 650,000 this year. “For years we’ve been saying that the market needs a decent, good-quality, relatively high-performing e-bike for $1,000 to $1,500. That’s the sweet spot,” said Ryan Citron, a senior research analyst at Guidehouse Insights. “Rad Power Bikes hit that mark.”

Mr. Citron cautions that Rad, which sells direct to consumers, might lose customers who want to take a test ride before buying. Brick-and-mortar stores also offer e-bikes from the likes of Specialized, Trek and Giant — although commonly selling for $2,500 to $5,000. Deluxe models climb to $15,000 and higher.

Regardless, an accessible joy ride is a welcome pandemic diversion. For the past couple of months, I ditched my car and used a Rad Power Bike as my primary mode of transportation. 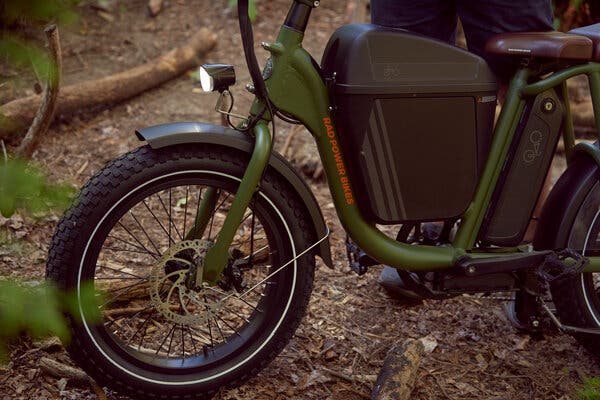 The company sells 11 models: city, cargo, folding and all-terrain options. I went with the $1,199 RadRunner, one of the company’s top sellers. Like most Rad Power Bikes, it’s equipped with a 750-watt motor; that’s the legal limit for a Class 2 bicycle and provides electric assist up to 20 miles an hour. No permit required.

Its battery pack, about the size of a loaf of bread, is 48 volts and 672 watt-hours. It takes about six hours to fully charge from a household outlet. On a mostly flat surface, and with light pedaling, the pack provides 30 to 40 miles of range.

On my first few trips, I wasn’t so much as riding as zooming. The road manners and the ability to cut through back alleyways are like any other bicycle — except my legs had reserves of backup power. Rad equips all its e-bikes with a half-twist hand throttle. It’s irresistible to launch with the flick of the wrist. There’s always a chance to pedal, but it’s not obligatory. It took some pedaling to propel the 65-pound bike up the steepest Berkeley hills. But it’s not onerous.

“Ninety-nine percent of your riding is blissfully electric. It’s an exciting amount of power,” Mr. Radenbaugh said. For the other 1 percent, he says, “you can overcome it with pedaling or by planning your approach to a hill.”

What’s most impressive about the RadRunner is its use of smart design, wringing value from clever choices. The RadRunner has extra-fat tires to absorb bumps rather than an expensive front suspension. The rear hub motor is simpler and more cost-effective than what is known as a pedal-assist mid-drive. The LED controller mounted on the handlebars is basic, but it’s user-friendly and gets the job done. The detachable battery can be brought inside to charge.

Squeeze the hand brakes to engage the 180-millimeter Tektro disc brakes, cutting off the motor and illuminating a rear red brake light. The chunky aluminum frame comes in two colors, black or forest green, and precisely one size, with an adjustable seat post making it adaptable to riders of nearly all heights.

“It’s the Volkswagen Beetle of e-bikes,” Mr. Radenbaugh said. “When we thought up the RadRunner, it was with that sense in mind. What’s the best-selling car in history? What’s the e-bike to do it all?” 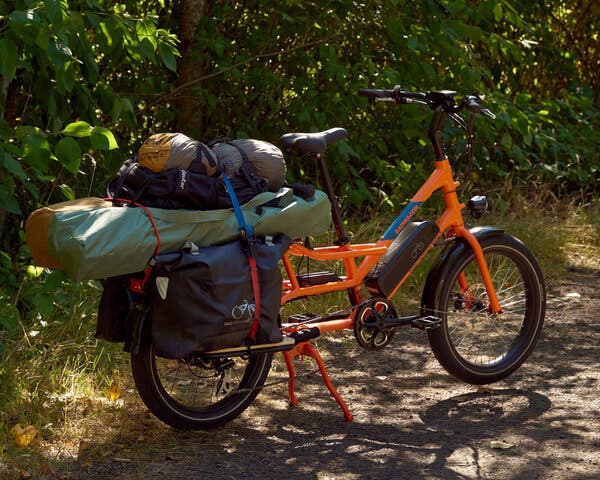 I’ve also been test-riding the RadWagon 4, the company’s latest release. The Runner’s 67-inch length is stretched nearly a foot to 78.7 inches on the RadWagon. This is an e-bike for grown-ups with family responsibilities.

It extends the cargo-style frame to accommodate a long list of accessories: running boards, sturdy metal baskets of various sizes, sizable insulated delivery bags and a Thule child seat. Adding cushions and handgrips for passengers now allows my wife to hop on back for trips to visit friends. I also added a large basket so we can load up on produce at the farmers’ market. The company’s easy universal accessory and mounting system would make Ikea jealous.

The RadWagon has seven gears. The low gears, when combined with a high level of electric power, allow the relatively heavy cargo bike to climb harsh inclines with little effort. But the real fun comes when setting the electric motor to 5, its highest setting, thumbing the shifter to the top gear and pedaling hard. Thankfully, the RadWagon’s speedometer shows when I need to brake to conform with legal limits.

Jeff Loucks, executive director of Deloitte’s Center for Technology, Media and Telecommunications, believes there will be 130 million e-bikes sold globally between 2020 and 2023. “They make so much sense, especially in a Covid world,” he said. However, he added that the United States still needs to catch up to cities in Europe and Asia with a biking culture and proper lanes to make cyclists feel safe. Cities have accelerated that process because of the pandemic. “People are turning to cycling for transportation, exercise and just to keep sane during this time,” Mr. Loucks said.

Mr. Radenbaugh, now 30, manages a staff of 200 people. He described the current pace of change — and the myriad business challenges it poses — as “hyper-growth.” It’s not easy steering a transportation revolution. He said, “Every night, I feel like my brain was beat to pieces.”

Fortunately, Mr. Radenbaugh has a way to clear his head. Every day, rain or shine, he rides his e-bikes to commute, shop or haul things around. He often uses prototype models to dream up new features and uses. “One of my favorite things to do is e-bike camping,” he said. He has a favorite campground about 30 miles east of Seattle, within reach of the RadWagon’s battery range. That’s where he can forget about the worries of the world, glide through country roads and relive the thrill of riding an e-bike for the first time.