As the competitors in the 2016 Flycasting World Championships arrived at their hotel in Nelijarve, Estonia, some noticed a 12-year-old girl jumping on the hotel’s trampoline.

The girl, Maxine McCormick of San Francisco, was not a tourist. She was their competition.

Maxine was competing in four events in the biennial championships of this niche sport, in which the world’s best handlers of flies and rods test their skills in a series of accuracy and distance competitions. Maxine, instead of tinkering with her equipment ahead of the competition or fretting over the wind, spent most of her time on the trampoline, jumping or lying down and reading on it. Once, she fell asleep.

Then she trounced every other woman in the competition’s most popular event, trout accuracy, in which competitors cast into a series of rings. Her score was also higher than those of all the men except one: her coach, Chris Korich. She placed third in the salmon distance event, using back muscles honed by hours of tree climbing to propel her line 127 feet.

“She’s the most efficient fly caster on the planet,” said Korich, who has been coaching Maxine since 2013. “I don’t know anyone in history that can claim to be better.”

In the five years since Maxine began fly casting — which she describes as “fly fishing without the fish” — she has become the sport’s youngest champion. And this weekend, at 14, she defended her accuracy title at the world championships in England with a score of 52 in the women’s division — 21 points clear of the second-place finisher. She also won the salmon distance category. 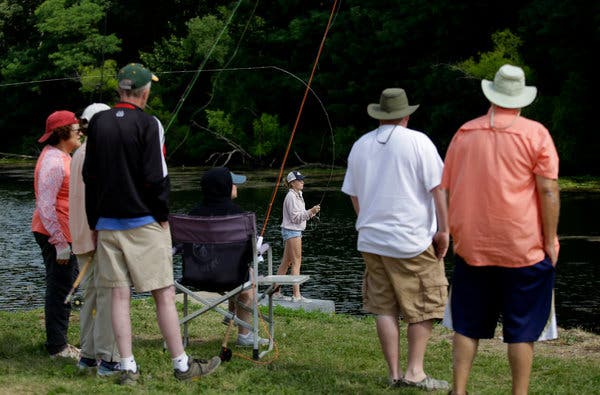 Maxine competing at the national championships.Credit…Joshua Lott for The New York Times

“I never knew I would become this good at anything,” Maxine said in a recent interview.

Now, she is no longer the tiny girl on the trampoline. She’s a teenager, taller and stronger, favoring fashionable clothing instead of the utilitarian outfits of most of her competitors. At practice, she’s focused and quiet, and when she starts casting, her dark eyes narrow to a frown as she attacks her target.

Maxine’s speedy journey to casting supremacy began when her father, Glenn McCormick, took her to the Golden Gate Angling & Casting Club in San Francisco in 2013. Like most people who come to the club’s pools, he simply wanted to become a better fisherman.

He didn’t know about the sport of casting, which began in the United States 150 years ago and flourished during the first half of the 20th century, when casting competitions took place at Madison Square Garden. The sport has faded into obscurity, but there is still a robust community of local clubs around the country, as well as national and international tournaments sanctioned by various governing bodies.

It’s a tiny sport, but the clubs offer people a chance to improve the distance and accuracy of their cast, which leads to more productive fishing. About 75 people compete in the yearly national tournaments, and there are about 150 elite competitive casters throughout the United States.

Maxine’s gift quickly became apparent. In the same way that tennis prodigies are somehow able to get extra spin and power on the ball from their first days on a court, Maxine could make the fly come off the tip of her rod with a zip and efficiency that young casters rarely have, her father said.

She also had access to local clubs that counted world champions as members, including Korich, an 11-time world champion. Temperate weather also helped, allowing year-round practice. By the time Maxine was 10 she was regularly outscoring all the women at national tournaments.

Equipment could be an issue. Waders didn’t fit. Korich had to sand down her rods to fit her strength levels. Korich, 59, who has two daughters of his own, balanced his instruction with frequent breaks for playing in nearby creeks, and often found himself standing under a tree, praying that Maxine wouldn’t fall out of it.

He also let her come up with names for the fundamentals she was learning. The wrist muscles she needed to activate while casting became her “magic rainbow bands,” in honor of her hobby of making rubber band bracelets. While practicing her back cast, a move that requires a thrusting backward motion, she imagined poking a giant in the eye with her rod. To remind herself to keep her movements close to her body to conserve energy, she pictured herself in a giant egg she didn’t want to crack. Korich has even learned how to use Snapchat to communicate with her.

With Maxine dominating the juniors, Korich told her she should focus on beating the sport’s Michael Jordan — Steve Rajeff, 61, considered the best fly caster of all time. Maxine agreed.

Korich knew how she could accomplish the feat. He grew up casting alongside Rajeff in the Bay Area, and he quickly realized as a teenager that he couldn’t match Rajeff’s strength. So he focused on efficiency, eventually beating Rajeff several times over the years. He began teaching Maxine the techniques he had developed to conquer Rajeff.

Rajeff said Maxine’s exquisite timing sets her apart in a sport that requires such delicate skill.

“Her casting loop, the rolling shape a fly line takes, it’s like every one is the same,” he said.

She is also skilled at what casters call “the presentation,” the way their cast descends upon its target. “Her sense of trajectory, and the lay down motion, is spot on,” Rajeff said. “There’s no collapsing, or there’s no going up too high and faltering, fluttering down.”

The McCormicks moved to Portland, Ore., after the 2016 world championships, and Maxine occasionally practices with Rajeff, who lives in Washington State. Casting has traditionally been a male-dominated sport, but Maxine is part of a long history of female fly-casting champions, including Joan Wulff and Pamela Peters.

The competition has learned not to dismiss her because she is so young.

“Just ’cause of the title, of being world champion,” she said.

During a recent training session with Korich at the Oakland Casting Club, Maxine worked on her distance-casting technique: She stood with her left foot in front of her dominant, right foot as she arced the long, flexible rod above her head.

“Pull your front toe up, get that weight transferred,” Korich yelled to Maxine, who adjusted her stance in her checkered Vans shoes.

The motion is similar to pitching a baseball, but with the added challenge of controlling a flyline, which occasionally smacks her in the face or hits a bird.

Korich’s excitement rose when her fly landed just shy of 100 feet away. “If you had a carrying wind, you would have hit that 110,” Korich told her.

Dappled light streamed through redwood trees, making it harder to judge distance, and wind bounced through the trees, changing the direction of their casts.

Maxine, at the national championships in Valparaiso, Ind., has earned the respect of much older competitors. Credit…Joshua Lott for The New York Times

Maxine and her coach took turns trying to beat each other’s distances, their lines slicing through the air. Then Maxine switched to accuracy practice. At the world championships, there are four targets, each with three rings. Competitors have five minutes to complete the course four times, left to right, and they accrue points depending on which ring they hit with their flies. As she practiced in Oakland, her fluid, repetitive motions appeared almost effortless.

A key part of Korich’s coaching strategy is planning something for Maxine to look forward to after a tiring practice session. In previous years, it has been ice cream. On this day, it was shopping. Maxine looked forward to a trip to her favorite store, Brandy Melville.

There are times when she doesn’t feel like casting, when she wishes she were hanging out with friends, or maybe watching a movie. It’s hard being the only young person in a sea of baby boomer men. At this year’s national championships in Indiana, she and her little brother, 7-year-old Tobias, who is also a burgeoning caster, were the only kids around.

Maxine is not sure what the future holds. There is no clear path for fly casting superstars the way there is for other sports. She loved being a counselor in training at fly fishing camp this summer. She might teach more.

But first, there was a world championship to take care of. She was mainly focused on beating her own scores, she said — and of course, those of her father, her coach and Rajeff.

“I’m pretty competitive,” she said with a giggle. “I don’t like to lose.”