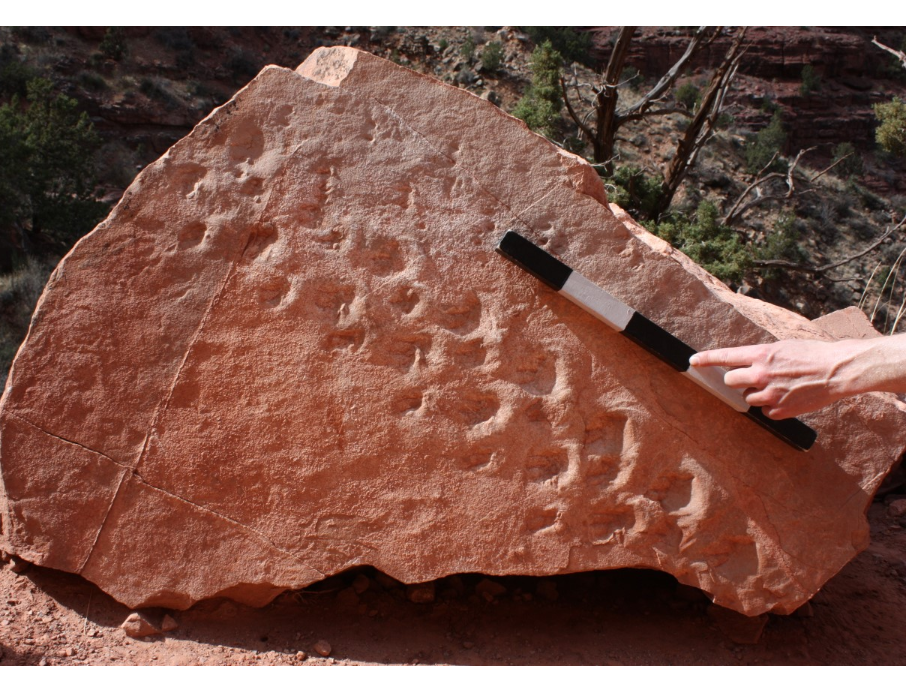 The two sets of footprints “are among the oldest tracks on Earth of shelled-egg-laying animals, such as reptiles, and the earliest evidence of vertebrate animals walking in sand dunes,” paleontologist Stephen Rowland said.

A geologist has discovered a pair of fossil footprints that researchers say are the oldest of their kind in the Grand Canyon, dating back 313 million years.

Allan Krill, a visiting professor from Norway, was hiking along a trail with a group of students in 2016 when he came across a fallen boulder containing the markings, according to a National Park Service news release.

The boulder, dropped there in a cliff collapse, held tracks that intrigued Krill who then sent a set of photos to his colleague, Stephen Rowland, a paleontologist at the University of Nevada Las Vegas.

After extensive research, Rowland called the discovery “by far the oldest vertebrate tracks in Grand Canyon.”

“More significantly,” he added, “they are among the oldest tracks on Earth of shelled-egg-laying animals, such as reptiles, and the earliest evidence of vertebrate animals walking in sand dunes.”

One of the features scientists noticed was the distinct gait of the ancient tetrapods, called a lateral-sequence walk. That’s when the legs on one side of the animal move in succession, the rear leg and then the foreleg, alternating with the opposite side.

“Living species of tetrapods―dogs and cats, for example―routinely use a lateral-sequence gait when they walk slowly,” says Rowland.

“The Bright Angel Trail tracks document the use of this gait very early in the history of vertebrate animals. We previously had no information about that,” Rowland added.

The findings were published on Wednesday in the journal PLOS One.