Her death was confirmed by her son Rodrigo García, who said she had suffered from respiratory problems for many years.

Mercedes and Gabo, as the couple were known, were living in Mexico City in 1965 when García Márquez began work on “One Hundred Years of Solitude,” the hypnotic, time-bending tale of the mythical village of Macondo, based on the area of Colombia where they had both grown up.

For more than a decade, García Márquez had been eking out a living as a journalist — a passionate leftist, he spent a year in the New York office of Prensa Latina, the Cuban press agency — while banging out short stories and novellas. For 18 months, he had holed up in his office in their home while Ms. Barcha kept the landlord, and the world, at bay. When he emerged in late 1966, he later recalled, she asked: “Did you really finish it? We owe $12,000.”

She then pawned her hair dryer and the couple’s blender so she could pay the postage to send the manuscript to his Argentine editor. The book — a South American Genesis, as many would call it, or “an intricate stew of truths and mirages,” as García Márquez wrote, in which priests levitated and flowers rained from the sky — would go on to sell nearly 50 million copies.

“One Hundred Years of Solitude” and many of the other novels and collections García Márquez published in the decades to follow would be among the rare literary works to enjoy both popular and critical success.

Its themes and characters swirled throughout all his books: savage political violence, passions romantic and otherwise, ghosts, family secrets, idealistic questing madmen and, always, the practical yet mystical women who grounded them — female avatars inspired in one way or another by Ms. Barcha, a sharp-witted beauty he had fallen for when they were children. 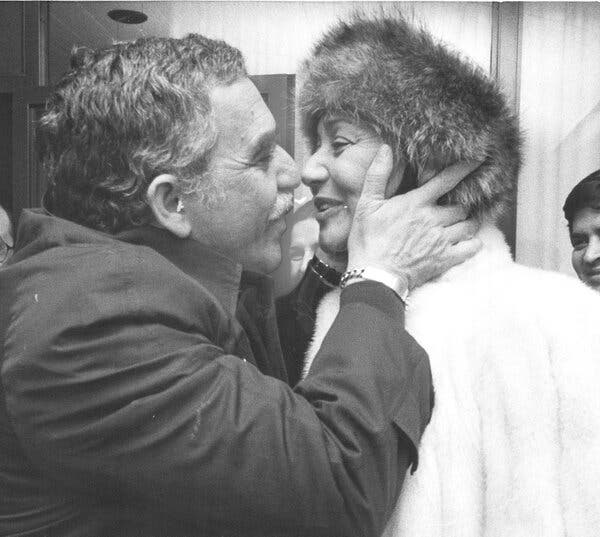 Toward the end of “One Hundred Years of Solitude,” as the history of Macondo begins to unravel, García Márquez wrote, “The old woman who opened the door with a lamp in her hand took pity on his delirium, and insisted that no, there had never been a pharmacy there, nor had she ever known a woman with a slender neck and sleepy eyes named Mercedes.”

“Mercedes permeates all my books,” he once said. “There’s traces of her everywhere.”

“He called her the manager of the crisis department,” their son Rodrigo García said, “sometimes without him even knowing what the crisis was.”

Mercedes Barcha Pardo was born on Nov. 6, 1932, in Magangué, Colombia. Her father, Demetrio Barcha, was a pharmacist; her mother, Rachel Pardo, was a homemaker. The oldest of seven children, Mercedes grew up in Sucre and then Barranquilla, on the Caribbean coast of Colombia, where her family moved to avoid the political violence that convulsed the region at midcentury.

There, home on holiday from convent school, she re-met García Márquez, who was writing for a local newspaper. As the story goes, he had already proposed marriage the moment he saw her back in Sucre, when she was 9 and he was 14. From the start he found her beautiful and enigmatic, “with an illusionist’s talent for evading questions,” as he wrote in his 2003 memoir, “Living to Tell the Tale.”

When García Márquez was sent to Europe as a foreign correspondent, he wrote to Ms. Barcha regularly. After his newspaper was shut down, he found himself broke in Paris, living in a hotel room and working on a manuscript. Her photo on the wall and a red Olivetti typewriter were among his only belongings.

Upon his return to South America in 1957, he paid Ms. Barcha 500 pesos (the equivalent of about $130, or about $1,200 today) to return his letters — she wouldn’t give them up without a prize — and promptly destroyed them. “He was years away from being famous,” Rodrigo García said, “but he was always very particular about their lives being private. He didn’t want the paper trail.”

The two married in 1958. On the day of the wedding, Ms. Barcha waited to put on her wedding dress until he had driven up. “It’s not that she doubted him,” Mr. García said, “but she had the superstition and the pragmatism of people from a certain world that said, ‘There’s a one-in-a-million chance that a bridegroom might not appear for his wedding.’ So it was just in case.”