Last October, standing on the front porch of a small two-story house that had seen better days, I witnessed one of the more unsettling conversations of my adult life.

I had embedded with a team of community organizers in Alamance County, North Carolina, an hour’s drive west of Raleigh. This was Trump country. The president had won here in 2016 by 13 points. The sheriff was on the record as having accused “criminal illegal immigrants” of “raping our citizens in many, many ways,” and the county had inked a $2.3 million contract with ICE to detain migrants who’d crossed the border and were living in the state. The local neo-Confederate group had seen a remarkable resurgence in the wake of Trump’s election, motivated by the fight over Confederate statues.

The organizer I was tagging along with that day was Sugelema Lynch, a soft-spoken former schoolteacher whose parents had immigrated to the U.S. from Mexico and moved around the West Coast as farmworkers. As an organizer, she engaged local citizens on the issues of undocumented immigration and Medicare for All as part of a larger experiment into whether compassionate face-to-face conversations could break down prejudice.

The husband and wife who lived in the house were our last door for the day. The wife eyed us warily at first, but soon warmed up and came out on the porch. Her husband took notice and joined the conversation. The couple nodded along as Sug (pronounced shug) talked about the greed of big pharmaceutical companies and protecting the vulnerable members of the community, but when it was their turn to talk, their responses sounded as if Tucker Carlson or Sean Hannity had been directly piped into their mouths. The “deep state” was thwarting President Trump from fulfilling his agenda. Democrats wanted to give “illegals” free health care while shafting the rest of us. There were a few casual references to liberal billionaire George Soros, the right’s go-to conspiracy-theory punching bag, and a jab at Hillary Clinton. When Sug or I asked where they’d gotten a piece of information or gently offered a counterpoint, they were polite but firm, certain in their position.

For almost an hour the conversation went on in that fashion, as the last bit of sunlight drained from the sky. The couple thanked us for the visit, and the wife even wrapped Sug in a big hug. As we walked back to the minivan, we were in a bit of a daze. “My brain hurts,” Sug told me as we pulled away.

I have replayed that conversation in my mind many times. We weren’t so much speaking past one another as trying to connect across different planes of existence. We’ve all had moments like this in the past few years — the uncle at Thanksgiving who sounds like an online comments section in human form. What I didn’t fully appreciate was how that exchange in Alamance County would encapsulate the central dynamic of the 2020 presidential election.

The contest between President Trump and former Vice President Joe Biden is not a choice between competing policy agendas or rival ideologies. It’s a choice between reality and anti-reality. Fact versus fantasy. Amid a pandemic that has killed more Americans than World War I and Vietnam combined, an economic recession that has rivaled the Great Depression, and a reckoning over racism and police violence, Trump’s plan for winning re-election is to sell the American people not on a vision for the future but an alternate reality of the present.

In that reality, Trump is the law-and-order president even as he foments violence in the streets of Portland, Oregon, and Washington, D.C. — or, in the case of Kenosha, Wisconsin, defends a 17-year-old vigilante (and Trump supporter) who allegedly shot three people, killing two of them. Trump’s handling of the Covid-19 pandemic is a great “success story,” to quote son-in-law Jared Kushner, no matter that the death toll in the U.S. outpaces most of the developed world. He inherited a “stagnant” economy (he didn’t) and turned it into the “greatest economy in the history of the world” (it wasn’t), only to be sidetracked by a disease he vowed would “disappear one day” (it hasn’t). Most brazen of all, Trump clings to the notion that he’s an outsider who will raze the existing political order, despite having stocked his administration with lobbyists, faithfully done the deregulatory bidding of oil and coal companies, and rained money down on defense contractors and billionaires. His signature accomplishments — like slashing corporate tax rates or appointing more than 200 mostly right-wing federal judges to the bench — were made possible by establishment cronies such as Senate Majority Leader Mitch McConnell. And yet Trump says with a straight face that he has “ended the rule of the failed political class.” In a lifetime filled with lies and fraud, Trump’s 2020 pitch may be his most audacious con yet. Except now, instead of bankrupting his own companies, he could very well bankrupt the country.

The man who stands between us and the triumph of Trump reality is himself a creature of the political class, a six-term senator and three-time presidential contender who has worked in politics his entire adult life. To defeat a sitting president unbound by facts, truth, and reality, Joe Biden is trying to hold together a center that may or may not exist anymore in American political life, and pull the country back from the brink of splitting beyond repair. 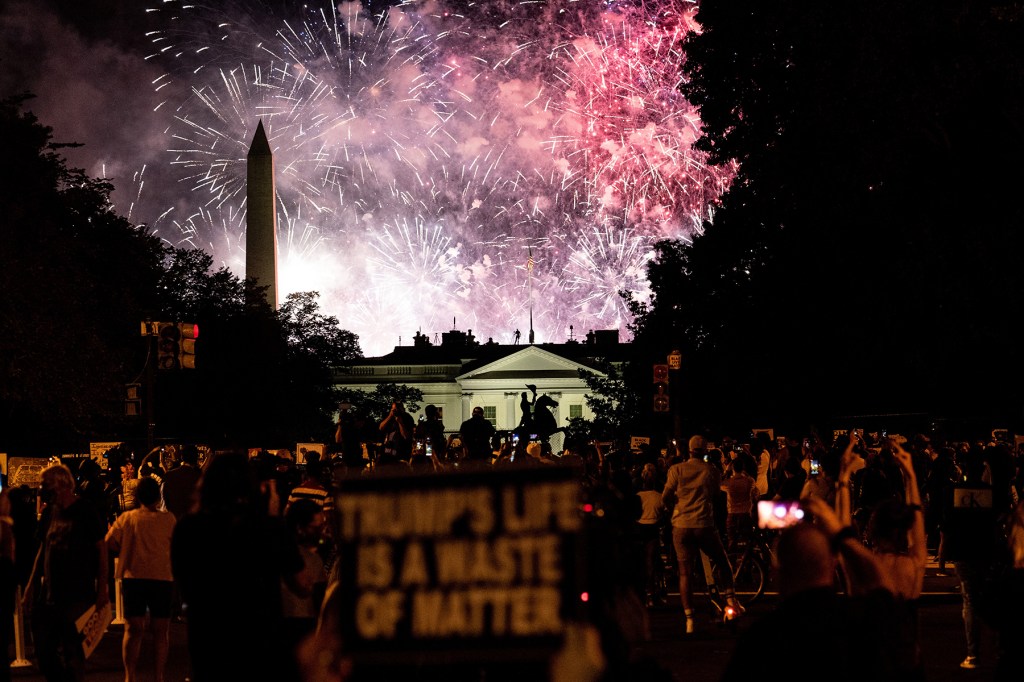 Protesters watch a fireworks display above the White House after President Donald Trump accepted the Republican presidential nomination during the final night of the Republican National Convention, in Washington, on Thursday, Aug. 27, 2020.

On paper, Biden enters the final leg of this endless campaign in possibly the strongest position of any challenger in modern times. His opponent has never once hit the 50-percent mark in Gallup’s presidential-approval ratings. On Trump’s watch, in a matter of months, Covid-19 vaporized the national GDP by a staggering 33 percent and took 20 million jobs with it, erasing all employment growth going back to the 2008 financial crash. The deep-seated animosity so many people — including some Democrats — felt for Hillary Clinton doesn’t seem to apply to Biden. The energy among Democrats to defeat Trump is so astronomical that Biden and his running mate, Sen. Kamala Harris, the first woman of color on a major-party presidential ticket, raised $364.5 million in the month of August alone, a new record. The demographics of the country should also play into Biden’s hands. The Republican Party has won the popular vote in a presidential election only twice in the past 32 years. Without the Electoral College, the two most destructive presidents in recent history, George W. Bush and Donald Trump, would never have been elected.

But we do have the Electoral College, and it means that Biden can’t afford a razor-thin margin of victory in the popular vote and a repeat of 2016 or 2000. In practical terms, the challenge that Biden faces is not only galvanizing his party’s most reliable voters in cities like Milwaukee, Detroit, and Philadelphia, but also winning back voters in the suburbs and rural counties where Trump trounced Clinton four years ago.

Biden’s pitch to these voters is more about values and patriotism than any specific policy agenda. From the day he entered the race 18 months ago, he has vowed to “restore the soul of our nation” and bring decency back to the presidency. His campaign has unveiled ambitious proposals on clean energy, green jobs, affordable housing, and closing the racial wealth gap, but he doesn’t often mention these in his speeches. At its core, the animating message of Biden’s candidacy — a return to a kinder, calmer, and more peaceful era — is itself a kind of magical thinking, a nostalgic kumbaya to a bygone era.

In the face of Trump’s strategy of activating his most loyal voters, Biden is appealing to a much larger audience and trying to give the impression of a big-tent Democratic Party that welcomes disillusioned Trump voters and independents into the fold. At the Democratic National Convention, an anti-union, anti-abortion former Republican governor in John Kasich spoke alongside a Democratic socialist and liberal celebrity in Rep. Alexandria Ocasio-Cortez.

Biden’s standing in Florida, arguably the most important state in the entire race, illustrates both the promise and pitfalls of this approach. Steve Schale, a strategist who works for Democrats in the state (including a pro-Biden super PAC), says Biden is seeing stronger support from college-educated white voters and even non-college-educated women than Clinton did, while his backing among Florida’s Hispanics has lagged. Winning Florida, Schale explains, will come down to places like Pasco County, an exurban swath of land north of Tampa that’s home to more than half a million people and hasn’t gone for a Democratic presidential contender since Al Gore in 2000. Biden almost certainly won’t win Pasco; it’s a matter of narrowing the margin of defeat. Barack Obama lost Pasco by 8,000 votes in 2008 and 14,000 in 2012; Clinton lost by 52,000. “In a place like Pasco, do we get back to what Obama did? No,” Schale says. “But if we get back three or four percentage points, that’s a big deal.”