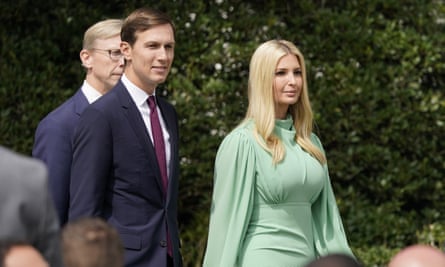 Saying the billboards would stay up, the group called Kushner and Trump “entitled, out-of-touch bullies, who have never given the slightest indication they have any regard for the American people”.

More than 8.4m cases of Covid-19 have been confirmed in the US, according to Johns Hopkins University, with a record high of 83,757 on Friday. As the virus surges, with the presidential election only 10 days away, the death toll has passed 223,000.

The Lincoln Project is staffed by Republican operatives supporting Joe Biden, the Democratic nominee. It announced itself in February at Cooper Union in New York, where Abraham Lincoln gave a famous speech in 1860. Then, group member Rick Wilson cited “the great political philosopher Liam Neeson” when he said his team had “a particular set of skills, skills that make us a nightmare for people like Donald Trump”.

In August, Sarah Lenti, the executive director of the Lincoln Project, told the Guardian a key aim was simply to distract the president.

“Some of these ads have an audience of one,” she said. “That’s always been part of the strategy. Because every time he gets off message, spewing grievances, he’s not campaigning. The idea is to get him off message again and again and again.”

Trump is currently staging rallies at which coronavirus mitigation measures are not observed, and claiming the US is “rounding the turn” in containing the surging pandemic.

But with its billboards in Times Square, a stone’s throw from Trump Tower, it seems the Lincoln Project may have succeeded in distracting the president’s daughter and son-in-law. On Friday, the Project posted to Twitter a letter from Marc Kasowitz, an attorney who has represented Donald Trump in cases involving allegations of fraud and sexual assault, in which he spelled out the billboards’ message.

“I am writing concerning the false, malicious and defamatory ads that the Lincoln Project is displaying on billboards in Times Square,” Kasowitz wrote. “Those ads show Ms Trump smiling and gesturing toward a death count of Americans and New Yorkers, and attribute to Mr Kushner the statement that ‘[New Yorkers] are going to suffer and that’s their problem’ … with body bags underneath.”

In September, Vanity Fair reported that at a meeting on 20 March, as the pandemic accelerated, Kushner railed against Governor Andrew Cuomo and said: “His people are going to suffer and that’s their problem.”

Ivanka Trump’s gesture on the billboard is taken from a controversial picture, tweeted in July, in which she promoted Goya black beans.

Kasowitz wrote: “Of course, Mr Kushner never made any such statement, Ms Trump never made any such gesture, and the Lincoln Project’s representation that they did are an outrageous and shameful libel. If these billboard ads are not immediately removed, we will sue you for what will doubtless be enormous compensatory and punitive damages.”

“The level of indignant outrage Jared Kushner, and Ivanka Trump have shown towards the Lincoln Project for exposing their indifference for the more than 223,000 people who have lost their lives due to the reckless mismanagement of Covid-19 is comical,” a statement said.

“While we truly enjoy living rent-free in their heads, their empty threats will not be taken any more seriously than we take Ivanka and Jared. It is unsurprising that an administration that has never had any regard or understanding of our constitution would try to trample on our first amendment rights. But we fully intend on making this civics lesson as painful as possible.

“Jared and Ivanka have always been entitled, out-of-touch bullies, who have never given the slightest indication they have any regard for the American people. We plan on showing them the same level of respect. The billboards will stay up. We consider it important that in Times Square, the crossroads of the world, people are continuously reminded of the cruelty or density and staggering lack of empathy the Trumps and the Kushners have displayed towards the American people.”

In an email to the Guardian on Saturday, Carl Tobias, a law professor at the University of Richmond in Virginia, said: “It does seem unlikely that Ivanka and Jared would actually sue the Lincoln Project, especially before election day, while after that hopefully they won’t care, can return to New York and stop pretending to be public servants.

“Her father has honed litigation abuse as a business person and president, to an art form,” Tobias added, but “if they did sue, the litigation might take years to resolve, be expensive and lead to embarrassing revelations … suits like this by people who have thrust themselves into the public eye are notoriously difficult to win.

“In short, this appears to be the usual Trump family bluster.”