Editor’s note: This story originally appeared in Teen Vogue and is republished here as part of Covering Climate Now, a global journalism collaboration strengthening coverage of the climate story. 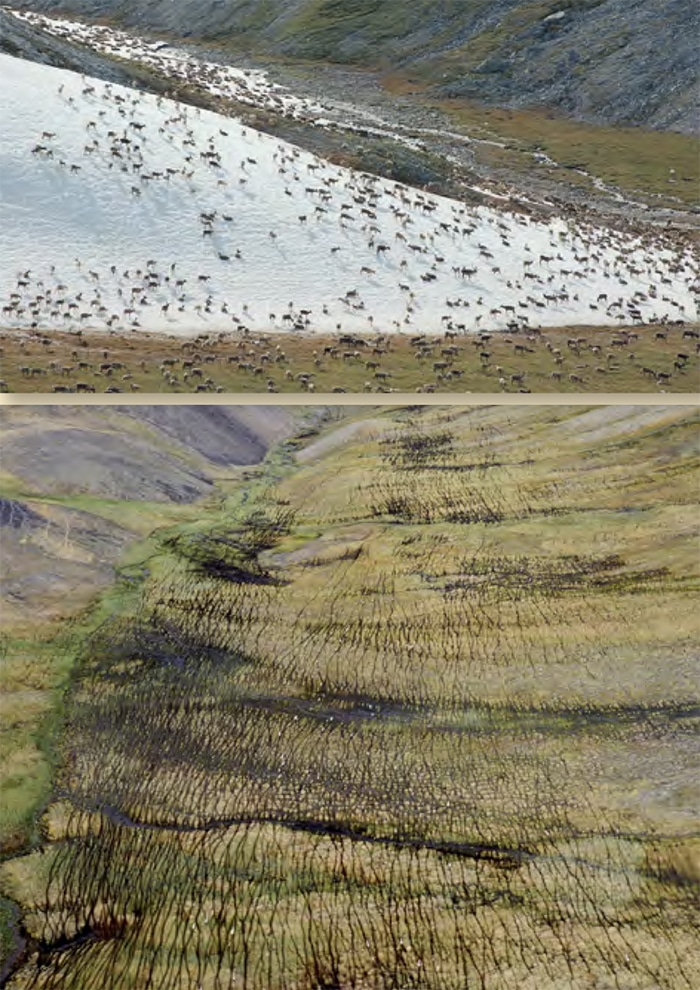 In March, Ph.D. candidate and climate justice organizer Maia Wikler traveled to Alaska to continue reporting on the ongoing human rights and climate crisis in the Arctic. She is directing a short documentary film, with support from The North Face, featuring the Gwich’in women who are leading the fight to protect the Arctic Refuge.

“Did someone lose their dog?” Quannah Chasinghorse jokes, pointing at a large moose in her neighbor’s snow-covered yard. At -40 degrees Fahrenheit, it is a typical winter’s day in Fairbanks, Alaska. Quannah, an 18-year-old Han Gwich’in and Oglala Lakota youth, is curled up on the couch, wearing a shirt emblazoned with the slogan “Protect the Arctic, Defend the Sacred.”

It is a rare moment of rest for Quannah. In the past year she has traveled coast to coast, advocating to protect her homelands from the desecration of oil drilling, with her mother, Jody Potts, who is Han Gwich’in and a tribal member of the Native Village of Eagle. Her mother also serves as the regional director for Native Movement and is a board member with the Alaska Wilderness League. This mother-daughter duo represents the decades-long fight to protect their state’s Arctic National Wildlife Refuge.

The refuge is hailed for its immense ecosystem of nearly 20 million protected acres, with sweeping tundra, glacial-fed rivers, and mountain ranges providing a sanctuary for wildlife, especially the 200,000-strong porcupine caribou herd, as of 2018. Before the region was deemed a wilderness refuge by the federal government, in 1960, it was known by the Gwich’in as “Iizhik Gwats’an Gwandaii Goodlit,” meaning “the sacred place where life begins.” This ancestral name refers to the calving grounds for the porcupine caribou on the coastal plain, whose migratory path the once-nomadic Gwich’in followed, and still guides the Gwich’in today. This region has been home to local Indigenous communities for millennia, and their lives, culture, and identities are inextricably tied to the well-being of the land. “What impacts the caribou, impacts the Gwich’in,” says Bernadette Demientieff, who is Gwichyaa Zhee Gwich’in, and the executive director of the Gwich’in Steering Committee.

The Arctic, dubbed ground zero for climate change, is warming at a rate twice as fast as the rest of the world. The region is at even greater risk since the unprecedented decision by the Trump administration and congressional Republicans to open the refuge’s coastal plain to oil and gas development. In August, the Interior Department formally announced its leasing program to open some 1.57 million acres of the refuge to drilling, NPR reported.

But Gwich’in women are leading an intergenerational movement to defend the refuge from oil rigs and wells, all while championing Indigenous rights and justice for missing and murdered Indigenous women. When Demientieff travels to Washington, DC, to advocate for her people and land, Gwich’in youth join her as part of the official Youth Council. “Each of them are hunters and fishers,” she explains, “and they all know how to survive off the land. They all have something to share.”

Since she was 17, Quannah has joined Demientieff to speak with senators on Capitol Hill as a member of the Youth Council. She credits the teachings of elders and women in her life for her sense of purpose: “My mom has always taught me to remember who you are and where you come from.” As Quannah wrote in a poem that she shares with Teen Vogue: “I’m from the beaded moose hide in modern clothes, from the smell of sage and taste of fry bread. I am from the fireweed trails. From the birch trees I used to climb, whose limbs I remember as though they were my own. I’m from the mushing, hunting, fishing, and berry picking trips, from the family of traditions. I’m from the potlatches and the legends our elders tell.”

“The reason I am the way I am is because my mom, grandma, and aunties have always taught me not to take sh*t from [any]one. To do the best for our people, sticking up for our rights and our lands. I’ve learned a lot from the women in my life,” says Quannah. Her mom explains that Quannah was raised in the movement, where over the years, during sweat ceremonies, she heard her mother and the powerful women in her “auntie squad” talk about activism and the fight for the land.