As Bob Dylan’s career blossomed, he kept in close touch with his friend Tony Glover. The pair’s conversations and letters — published here for the first time — show a Dylan that few people knew

On March 18th, 1971, Bob Dylan sat down in his Manhattan office, put his feet up on a table, strummed a guitar, and opened up like he rarely, if ever, had before. He was talking to his old friend Tony Glover, the first of four interviews they conducted that year. At various moments Dylan reacts to being booed at Newport in 1965 (“It was a strange night”), recalls writing “Subterranean Homesick Blues” (“story of a mad kid”), remarks on his craft (“My work is a moving thing”), and dismisses his honorary doctorate from Princeton (“a strange type of degree — you can’t really use it for anything”). Feeling unfairly dissected by dimwitted critics who milked his lyrics for autobiographical information, he fired back. “Do you think Johnny Cash shot a man in Reno?” he asked. “Or that Paul Simon would throw himself down over a troubled Hudson River and let somebody use him as a bridge?” The interviews totaled three and a half hours, and never saw the light of day — until now.

Speaking with Glover, Dylan’s jangled nervous energy of the previous decade had vanished: He was untroubled and erudite, willing to shed light on things he’d never fully explained before. Dylan felt comfortable with Glover, a blues harmonica player and musicologist from Dylan’s home state of Minnesota. Glover was one of the few people with whom Dylan regularly kept in touch once he left Minneapolis for New York. In the Newport Folk Festival program of 1963, Dylan wrote that Glover was “a friend to everything I am … who feels and thinks and walks and talks just like I do.”

In entrepreneurial mode, Glover hoped to use the interview transcripts — extensively annotated and revised in Dylan’s handwriting — for an article in Esquire. Nothing ever came of the project because Dylan eventually lost interest in it. The fiercely loyal Glover, who died in 2019, safeguarded the tapes and transcripts along with four letters and a treasure trove of other memorabilia he amassed from Dylan over the years. Beside the main interviews, there are six additional recordings of telephone calls between Dylan and Glover from 1969 to 1971.

On November 19th, RR Auction in Boston will sell this historic collection of Dylaniana on behalf of Glover’s widow, Cynthia. It makes for an extraordinary time machine, bringing readers inside the mind of Dylan in the wake of the counterculture Sixties, an era that, from the safe perch of 1971, Glover deemed “a very destructive, mind-, body-, and soul-destroying time.”

The Dylan-Glover friendship began around 1960, roughly the same time Dylan stopped attending classes at the University of Minnesota to play folk and blues music in Minneapolis clubs with Spider John Koerner, Dave Ray, and Glover. All three had consequential careers as musicians in the Twin Cities and beyond. Glover played blues harmonica with a complexity all his own, becoming an inspiration to Dylan, the Rolling Stones, and the Doors. “As far as harp playing went, I tended to keep it simple,” Dylan recalled in Chronicles about his days in Minneapolis’ Dinkytown. “I couldn’t play like Glover or anything, and didn’t try to. I played mostly like Woody Guthrie, and that was about it. Glover’s playing was known and talked about around town, but nobody commented on mine.”

Dylan was living in New York when Glover suggested the series of in-depth interviews. Only to Glover would he admit that listening to his mid-Sixties album masterpieces like Bringing It All Back Home and Highway 61 Revisited “spooked” him out. “You didn’t sing songs like that and live a normal life,” Dylan said. “In order to be that strong on one level, you have to be very weak in other ways.” Their resulting conversations — published here for the first time — are always upbeat and friendly. For the most part, Glover tried to maintain a chronological approach, starting with Dylan’s departure from Minneapolis in January 1961 to meet his idol Woody Guthrie in Greystone Park Hospital, in Morris Plains, New Jersey, and ending with the release of Bob Dylan’s Greatest Hits Vol. II in 1971.

Glover knew the meeting with Guthrie was especially important to Dylan. In the first interview, Glover wondered if Dylan met other musicians in the hospital wanting to hang with Woody. “I didn’t see any musicians, I saw a lot of other men just sitting around,” Dylan recalled. “That’s the only place we could meet, in the lounge. There’d be, like, 50 or 60 guys sitting around in pajamas. There’d be like little card tables all over the place. … I can remember the smell at the place more than anything else.”

Imagining the scene, Glover suggested it must have been difficult talking one-on-one in the crowded hospital. “There really wasn’t much to say,” Dylan responded. “He wanted to hear his songs, and I would play ’em. I knew ’em all at that time. I must’ve known at least 75 of his songs. So there I was, any day I’d go out there, I’d never exhaust the repertoire, ever.” At one point, Guthrie suggested Dylan should visit his wife Marjorie in Howard Beach, Queens, to listen to some of his unrecorded songs. “I took the subway out to the end of the line — this was really out there,” Dylan recalled. “And after I got off the subway I walked through the swamp. This was in February, I think. Eventually I got up to the door — that was one long trip. I remember that more than I remember actually going to see Woody himself — because it was actually easy to get to see him. It wasn’t easy if you lived in California or the Midwest — but if you were right there, just anybody could walk in and meet him at the Morristown hospital. Between 2:30 and 5:00 any visitor could come. … Well, I came to New York to see him … I was dead set to meet him. And that’s what I did. Must’ve been three days in the city and I was out there. I was high on that feeling for a long time.” 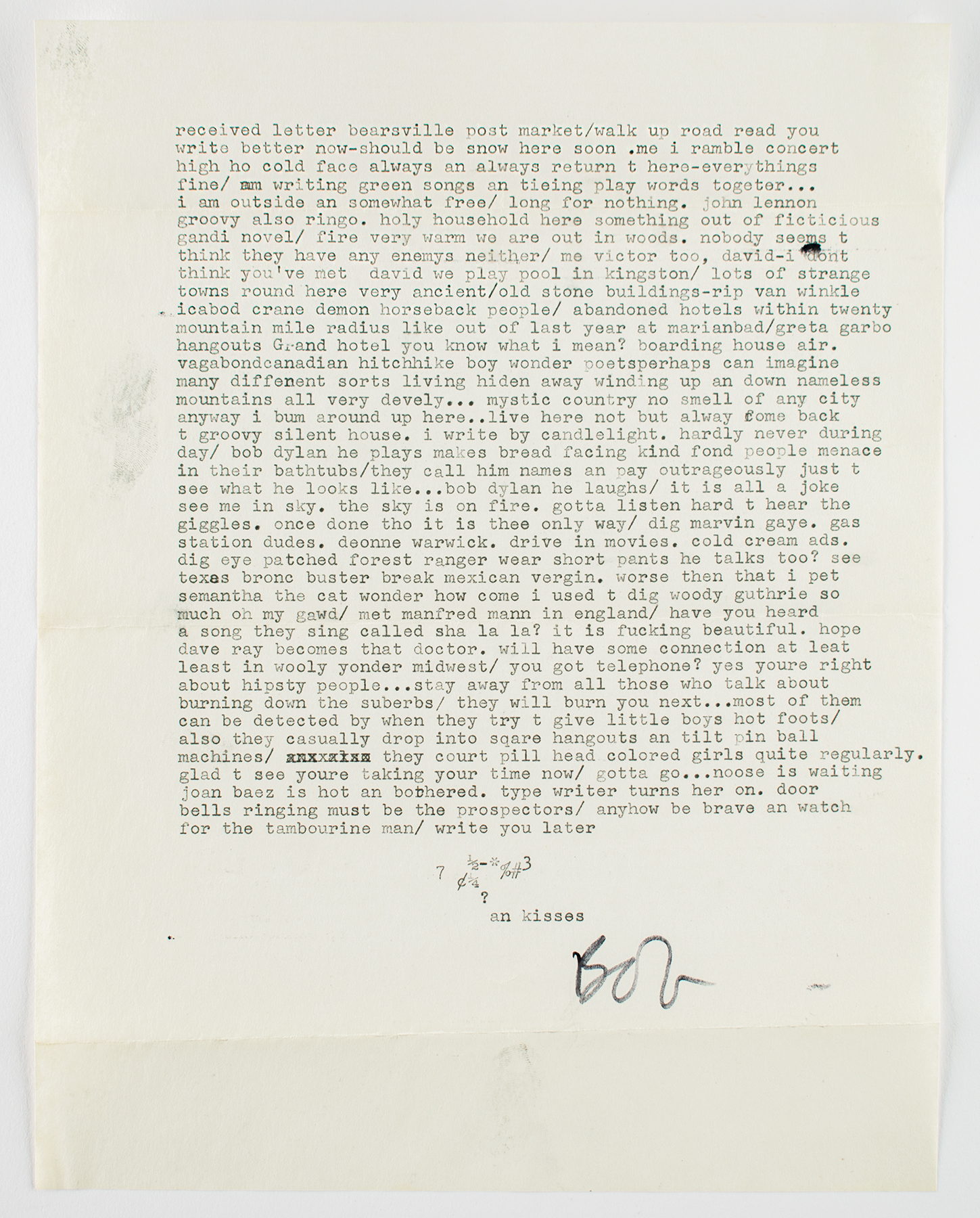 Included in the Dylan memorabilia that Glover’s widow, Cynthia Nadler, is putting to auction November 19th are the tapes and transcripts — with Dylan’s handwritten revisions — of the four interviews conducted in 1971, as well as Dylan’s letters, including one from 1964 in which he wrote, “john lennon groovy also ringo.”

Glover was curious how Dylan made it to New York on his first trip. “Hitchhiked out of St. Paul and wound up in Madison, Wisconsin,” Dylan responded. “Destiny just brought me there, I had no idea. It was just some stroke of luck. I got out of the car … and ran into some guitar players. After staying around there for a few days … I can’t recall. Think we got a ride from Madison all the way from two young New Yorkers.” As for fleeing Minnesota, Dylan felt it was the only sensible option. “I mean, I had to leave. The only other choice was to sell shirts, or work in the mines, or maybe to learn to fly an airplane. … I don’t think I wanted to be James Dean — but there was a period of time when I blocked out everybody else. No one else really meant anything as much as [Guthrie] did.”