Rōbert,  My man, you better get the presses turning and the obit flowing .News travels fast, Doug Scott .A very complete obit.  respectful and to the point. When I read of his passing I thought immediately of Sibley. The last time I saw Scott was one evening at Paul Sibley’s home. 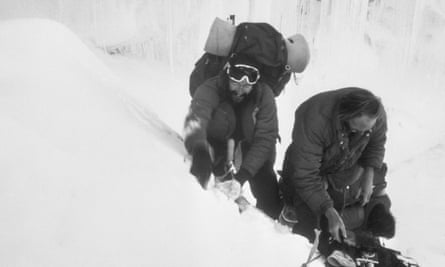 Doug Scott, left, and Hamish MacInnes in an icefall on Everest in 1975. Photograph: PAEd Douglas@calmandfearlessMon 7 Dec 2020

Doug Scott, who has died aged 79 from cancer, was the first Englishman to climb Everest, but it was what happened afterwards that made him famous in the mountaineering world.

Scott and his Scottish partner, Dougal Haston, were part of Chris Bonington’s 1975 expedition to climb Everest the “hard way”, via the south-west face. Having left their top camp soon after dawn, the pair faced testing delays as Haston’s oxygen equipment iced up and unconsolidated snow, chest-deep in places, slowed their progress. It was already 3.30pm when they finally reached the lower south summit where the two climbers paused to melt snow for a much-needed drink.

Should they go on? Haston suggested stopping for the night but Scott reasoned it was better to push on and get it done. Two hours later, at around 6pm, they were at the top.Advertisementhttps://b95d8f6b71c66a81635ec985e99604ee.safeframe.googlesyndication.com/safeframe/1-0-37/html/container.html

Scott was exultant and despite the late hour spent time taking in the view before descending. By the time they regained the south summit, their headlamps had failed and it was too dark to continue. With their bottled oxygen finished, Haston and Scott faced a brutal night of hypoxia and cold. No one had ever spent a night out at this altitude. Even worse for Scott, he had left his down-filled suit behind because it was too constricting to climb in. All night they struggled with hallucinations and the threat of hypothermia but both survived without frostbite and were able to descend at first light.

Scott’s reputation for physical stamina and mental strength was only enhanced two years later following the first ascent, this time with Bonington, of the fearsome Karakoram peak known as the Ogre. Abseiling from the summit, Scott slipped and swung into a rock wall, breaking both his legs. Marooned at 7,200 metres with no possibility of rescue, on a mountain of considerable difficulty, Scott crawled on his knees back to base camp through a storm, helped down by his teammates Mo Anthoine and Clive Rowland. It remains one of the great survival stories in world mountaineering.

Understandably, such famous stories of hardship and human endurance sometimes overshadowed the complexities of a man who saw his life in the mountains as part of a spiritual journey, studied Buddhism and dedicated his later years to helping the people of Nepal.

The son of Joyce and George Scott, Doug was born in Nottingham on 29 May, the date upon which Tenzing and Hillary would climb Everest 12 years later. George was a policeman and notable boxer, in 1945 the British amateur heavyweight champion, but gave up his Olympic dream to focus on his family and tend his allotment. Doug inherited his father’s powerful frame and his green fingers, growing organic food wherever he settled.

Many climbers of Scott’s generation found childhood inspiration in the film of the 1953 Everest expedition, but Doug was a fidgety boy, ticked off for not sitting still when his class was taken to see it. His route to Everest began more in exploration of his own neighbourhood, building dens or roaming with friends. School was too dull when there were adventures to be had, but, having failed the 11-plus, and having been shown what it was like working in one of the local coalmines, he knuckled down at his secondary modern, taking extra classes and discovering a love of reading. He moved on to grammar school and to Loughborough for teacher training.

Scott discovered climbing during an Easter scout camp in 1955, when he saw men scaling Black Rocks above the Derwent Valley. He was smitten instantly. A fortnight later he cycled the 20 miles back there from Nottingham equipped with his mother’s washing line. Burly and broad-shouldered, Scott was brim full of energy.

Married at 20 to Jan Brook, through the 1960s he juggled a teaching career (often taking his charges into the hills), a growing family, rugby and climbing. There were exploratory expeditions with a group of Nottingham friends, first to the Tibesti mountains of Chad in 1963 and then in 1965 the Hindu Kush of Afghanistan, travelling overland by truck.

By the late 60s, Scott had earned a reputation as an “aid” climber, placing pegs in the rock and hanging on them where necessary, in this way making the first ascent of the Scoop, up the wildly overhanging cliff of Strone Ulladale on the Isle of Harris; as well as several hard ascents in the Dolomites and the Troll Wall in Norway.

He also discovered Yosemite, climbing with the American star Royal Robbinsand then making the first European ascent of El Capitan’s Salathé Wall with the Austrian Peter Habeler. The freewheeling Californian scene appealed to Scott; he tried acid, once and rather by accident, and became switched on to a less self-absorbed way of living, something that would only deepen when he discovered the Himalayas and more mystical ways of seeing.

By then he had quit teaching, having been refused leave of absence to climb Mount Asgard on Baffin Island and was earning a living as a jobbing builder. In the bath one morning in February 1972, he got a call from the Salford climber Don Whillans inviting him on an international expedition to Everest’s south-west face. They would be leaving for Nepal in a few weeks. “I don’t suppose,” Scott wrote in his memoir Up and About (2015), “if I had remained a schoolteacher, Don would have asked me along.” The expedition was fraught, but Scott discovered his true milieu, the otherworldly, physically punishing world of high-altitude mountaineering.

Performing strongly, he was asked on Bonington’s first attempt in the autumn of 1972, beginning an intense period of cooperation that saw them climb Changabang in the Indian Himalayas before the successes on Everest and the Ogre. Then, in 1978, in the middle of an expedition to K2 and following the death of a teammate, Nick Estcourt, in an avalanche, this productive relationship ended, although the two would later restore their friendship.

There were many more expeditions, including more attempts on K2, but Scott’s greatest climb was arguably a demanding new route up the world’s third highest mountain, Kangchenjunga, climbed without bottled oxygen and with only four in the team. Climbing style had become of increasing importance to Scott, the way being more important than the goal.

This reflected a growing spiritual interest, sparked in part by his discovery of Buddhism as a schoolboy, a discovery that deepened as he explored the Himalayas. Milarepa, the 11th-century Tibetan master, was one inspiration. So too was the mystic philosopher George Gurdjieff. After he had a number of intense, out of body experiences in the mountains, it was perhaps unsurprising that Scott should find himself a seeker.

Always generous with his friendship, as he entered middle age Scott became a mentor to new generations inspired by the idea of lightweight climbing and the ideas he espoused. Bonington called him “a tribal chieftain”. And when his climbing career wound down, he served on committees and was president of the Alpine Club, standing up for what he saw as the sport’s ethical soul.

Most important to him was helping the communities he met on his Himalayan expeditions, pouring immense energy into the charity he founded in 1989, Community Action Nepal (Can). This was established initially to improve working conditions in tourism but later had broader development aims with a significant budget. It was typical of Scott that he should use his last illness as a final opportunity to raise money and awareness for CAN’s work, with a sponsored climb of his staircase.

Scott was twice divorced. He is survived by his third wife, Trish (nee Laing), whom he married in 2007; by three children, Michael, Martha and Rosie, from his first marriage, to Jan; and by two sons, Arran and Euan, from his second marriage, to Sharu (nee Prabhu).

• This article was amended on 8 December 2020 because Doug Scott was born 12 years before Tenzing and Hillary climbed Everest, not 13, as an earlier version said.