“White folks don’t understand about the blues,” says the pioneering singer Ma Rainey, as imagined by August Wilson and incarnated by Viola Davis. “They hear it come out, but they don’t know how it got there. They don’t understand that that’s life’s way of talking.”

Albert Murray, the great 20th-century philosopher of the blues, put the matter more abstractly. The art of the music’s practitioners, he wrote, involves “confronting, acknowledging and contending with the infernal absurdities and ever-impending frustrations inherent in the nature of all existence by playing with the possibilities that are also there.”

“Ma Rainey’s Black Bottom,” Wilson’s 1984 play about a recording session in Chicago in the 1920s, both dramatizes and expresses that duality. Absurdities and frustrations abound, and the lethal, soul-crushing shadow of American racism falls across the musicians and their instruments. The specific and manifold evils of Southern Jim Crow repression and Northern economic exploitation are unavoidable. The members of Ma’s band swap stories of lynching, assault and humiliation, and Ma fights with the white owner of the record label (Jonny Coyne). By the end of the play — a swift hour and a half in George C. Wolfe’s screen adaptation — one man is dead and another has seen all his prospects evaporate.

But the sense of play and possibility, the joy and discipline of art, are also, emphatically, there. There in Ma’s big voice and smoldering, slow-rolling charisma. There in the tight swing of the players behind her — Cutler (Colman Domingo) on trombone; Toledo (Glynn Turman) on piano; Slow Drag (Michael Potts) on bass; and an ambitious upstart named Levee (Chadwick Boseman) on cornet. There in the voices and personalities of the actors: Turman’s gravelly wit; Domingo’s avuncular baritone; Boseman’s quicksilver; Davis’s brass. And there above all in the singular music of Wilson’s language, a vehicle for the delivery of vernacular poetry as durable and adaptable as the blues itself.

This version of “Ma Rainey’s Black Bottom,” on Netflix, is part of an ongoing project to bring all of Wilson’s plays — a cycle representing aspects of Black life in the 20th century — to the screen. That makes it, in some ways, definitive by default, part of an archive of preserved performances that will introduce future generations to the playwright’s essential work.

It’s also definitive because it will be hard, from now on, to imagine a Ma Rainey other than Davis, or a Levee to compare with Boseman. The rest of the cast is first-rate too, but those two carry the play’s meatiest, most complicated theme, and enact its central antagonism. Each character is an ambitious, inventive artist, and their inability to harmonize creates an undertone of tragedy that grows more insistent as the day wears on.

Ma, who rolls into the studio late, flanked by her nephew, Sylvester (Dusan Brown), and her young girlfriend, Dussie Mae (Taylour Paige), can seem almost like a caricature of the “difficult” artist. She insists that Sylvester, who stutters, record the spoken introduction to her signature song. She demands three bottles of Coca-Cola (“ice-cold”) before she will sing another note, and continually upbraids her nervous white manager (Jeremy Shamos). But this behavior isn’t the result of ego or whim. It’s the best way she has found of protecting the value of her gift, which once it becomes a commodity — a record — will enrich somebody else. The hard bargain she drives is the best deal she can get. 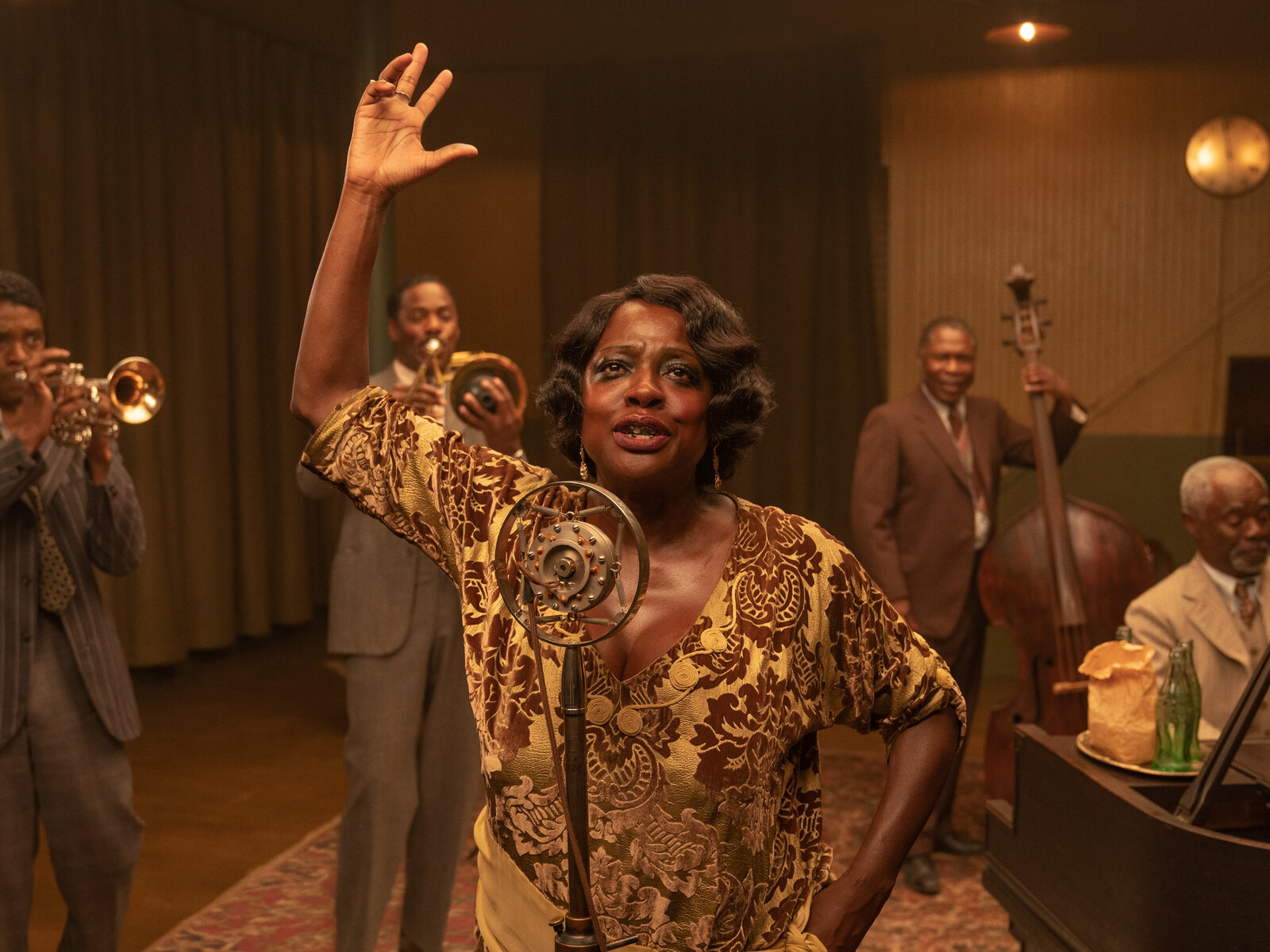 Ma Rainey (Viola Davis) wants her Coca-Cola, or she’s not gonna sing. Never mind that this recording session during the sweltering Chicago summer of 1927 is already running behind because she and her mini-entourage arrived to the studio an hour late. No matter that tensions are already simmering among her four-piece band, and that her manager and music producer are at their wits’ end trying to cut this blues record.

No Coca-Cola, no Ma Rainey’s voice.

This is what some would deem Diva Behavior. Such demands would seem out-of-line, unreasonable, or – to use that loaded pistol of a word so often wielded to describe tough black women – difficult. But it’s not really about the Coca-Cola, or being a diva. It’s about reclaiming power. As Ma tells her trombonist Cutler (Colman Domingo), those white music producers want to make money off of her but are too cheap to buy her a soda.

“They don’t care nothin’ about me,” she laments matter-of-factly. “All they want is my voice. Well I done learned that, and they gonna treat me the way I wanna be treated no matter how much it hurt them.”