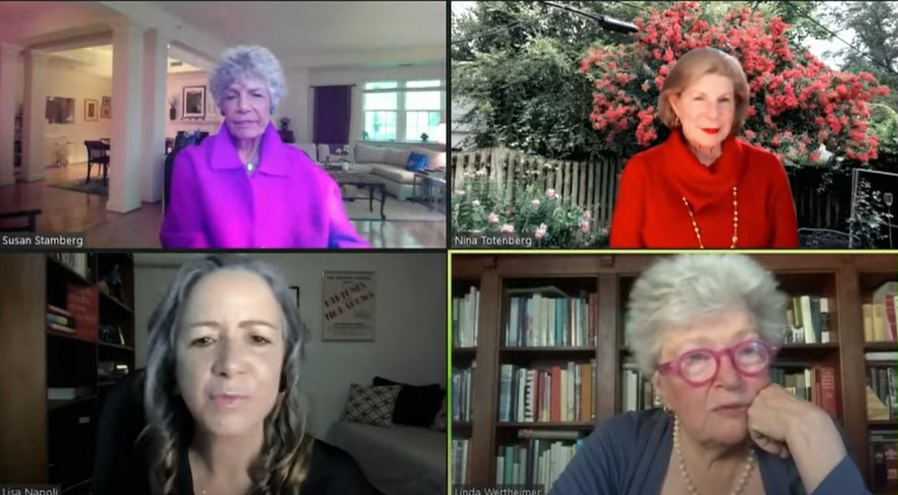 WASHINGTON, April 16, 2021 — Their voices became familiar to the public throughout decades of news, on commutes and in crises, an “old girls’ network” in the nascent days of public radio: Susan Stamberg, Linda Wertheimer, Nina Totenberg, and Cokie Roberts.

This week, in conversation with journalist and author Lisa Napoli, three broadcasting legends candidly recounted the beginning of what would become the standard-setting National Public Radio, the challenges of trailblazing as women in a misogyny-driven 1970s work environment, and the legacy of friend and colleague Roberts, who died in September 2019.

“I, from the very beginning—I think everyone felt this way—had big ambitions for the idea that we could create [NPR] in very difficult circumstances,” Stamberg said during a National Archives panel discussion for Napoli’s book, Susan, Linda, Nina, and Cokie: The Extraordinary Story of the Founding Mothers of NPR.

“It was desperate, it was thrilling, it was hilarious, it was horrible. It was everything. But it had a future, and we knew it,” she added.

Their careers followed the trajectory of public radio, flourishing as NPR grew and its programs reached areas around the country with limited news access.

“The accessibility of actually reliable information was scarce in many communities, so if there was a place where you could just turn on the radio and find it out, it was a big deal,” Totenberg said.

The camaraderie and mutual help and respect sculpted their decades on air, and bolstered their resolve in the face of sexism in the workplace.

“I think one of the things that is hard to believe for young women today is how really awful it was,” said Wertheimer, before describing “the single stupidest thing that ever happened to me”: evading a handsy senator in his Congressional office.

View the hour-long conversation on the National Archives YouTube channel (the ladies panel starts at 16.13 minutes on the recording) to hear more about the journalists’ efforts to establish themselves and NPR as news powerhouses.