Why is the North American Monsoon (NAM) so difficult to predict? There are many reasons but the main difficulty has to do with a lack of ability to predict the placement and strength of the subtropical high which sets up near the Four Corners each and every summer.

(CNN)Amid a worsening drought across the southwestern United States, residents are hoping for rain from the upcoming monsoon season. But there may not be much luck this year.”A drier than normal Southwest monsoon season is slightly favored for 2021,” Scott Handel, lead meteorologist at the National Oceanic and Atmospheric Administration’s (NOAA) Climate Prediction Center (CPC), told CNN.”Confidence in below-normal precipitation is generally higher for eastern areas of the monsoon region,” Handel said, which includes New Mexico.

The forecast is less uncertain further west into Arizona and the desert Southwest. But for meteorologists, it’s still not clear if the monsoon season will feature below average, above average or normal rainfall. 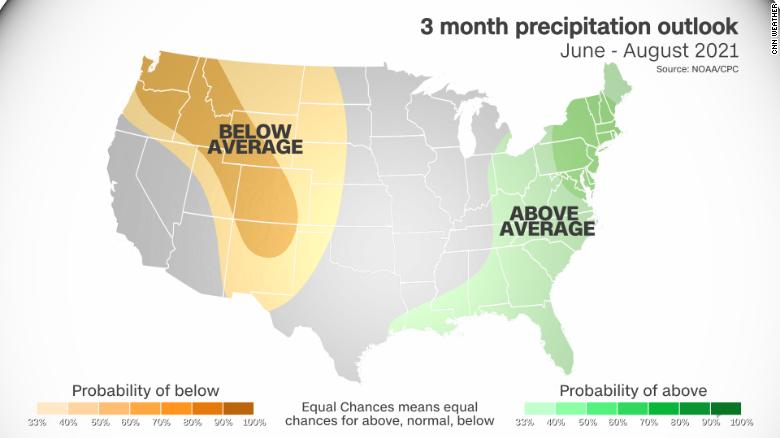 Climate Prediction Center’s precipitation outlook for June through August.There is a “large divergence in solutions within the seasonal forecast models CPC uses to make their forecast. Typically, the CPC has more confidence toward a wet or dry monsoon forecast if the majority of the seasonal forecast models are in agreement,” said Christopher Castro, professor of Hydrology and Atmospheric Sciences at the University of Arizona.

Since the weather forecast models disagree on the rainfall outcome, the CPC is unsure how this season will play out for some locations in the Southwest.

Drought: Water year precipitation (as of May 31, 2021) is between below normal and record driest across most of the Southwest (Fig. 4). The U.S. Drought Monitor (USDM) intensified drought categorizations across the Southwest since the May climate outlook (Fig. 5). Most of the region was already characterized as experiencing drought, but these changes expanded the areas under D3 (Extreme Drought) and D4 (Exceptional Drought), and the scale simply does not go any drier.

Water Supply: Snowpack is dwindling, and the latest streamflow forecasts were generally below the 1981-2010 median for the higher elevation regions that feed into streams over summer (see the NRCS website for details). Most of the reservoirs in the region are at or below the values recorded at this time last year. Most are below their long-term average (see Arizona and New Mexico reservoir storage).

Wildfire: Wildfire season saw a rapid surge of activity, particularly in Arizona (Fig. 6). The Telegraph/Mescal complex fire is notable in size and duration, with waves of closures and evacuations. The National Interagency Fire Center (NIFC) significant wildland fire potential outlooks call for normal wildfire risk across Arizona and New Mexico in July. This leans on monsoon precipitation tamping down risk. Until those rains begin, there are increased opportunities for ignition in the Southwest with the potential for dry lightning.

ENSO Tracker: La Niña conditions are over, with outlooks and forecasts reverting to ENSO-neutral (for now). The long-term forecasts see a possible return to La Niña conditions this winter, but it will be a wait-and-see situation over much of summer (see ENSO-tracker for details).

Precipitation and Temperature Forecast: The three-month outlook for July through September calls for increased chances for above-normal precipitation across much of the Arizona, and a large swath of increased chances for below-normal precipitation in New Mexico (Fig. 7, top). The three-month temperature outlook calls for equal chances of above- or below-normal temperatures across much of the southwestern U.S. and portions of northern Mexico.