Winter weather, ongoing drought conditions and even the remainder of hurricane season will see impacts from a recent cooling of sea surface temperatures in the Pacific. La Niña conditions — the opposite phase of El Niño — have emerged in the tropical Pacific Ocean over the past month, the National Oceanic and Atmospheric Administration’s Climate Prediction Center said Thursday. 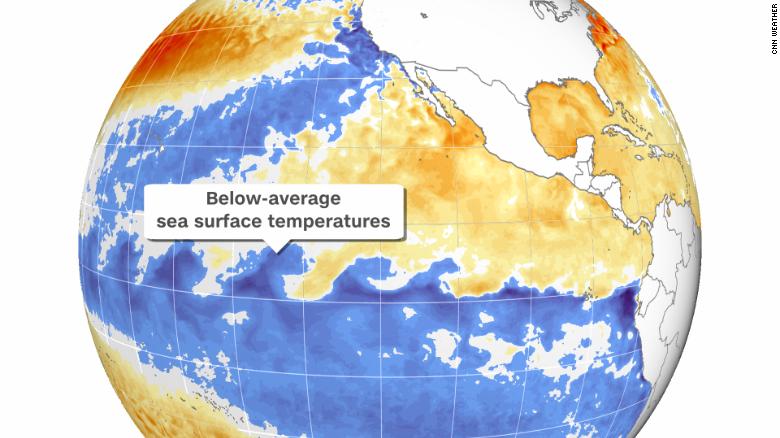 La Niña typically brings conditions that are wetter and cooler than average to the Pacific Northwest and northern Plains, especially during the winter.

In contrast, La Niña means drier and warmer-than-average conditions usually prevail in the South. This could mean the drought-stricken Southwest will likely stay drier. (La Niña also was present last winter and worsened the drought situation across the West and Southwest.)

The Southeast is also typically drier during a La Niña winter, though before the season starts, it increases the possibility for tropical weather, including hurricanes.

La Niña will persist through winter in the US

La Niña — translated from Spanish as “little girl”– is a natural ocean-atmospheric phenomenon marked by cooler-than-average sea surface temperatures across the central and eastern Pacific Ocean near the equator that consequently impact weather across the world. 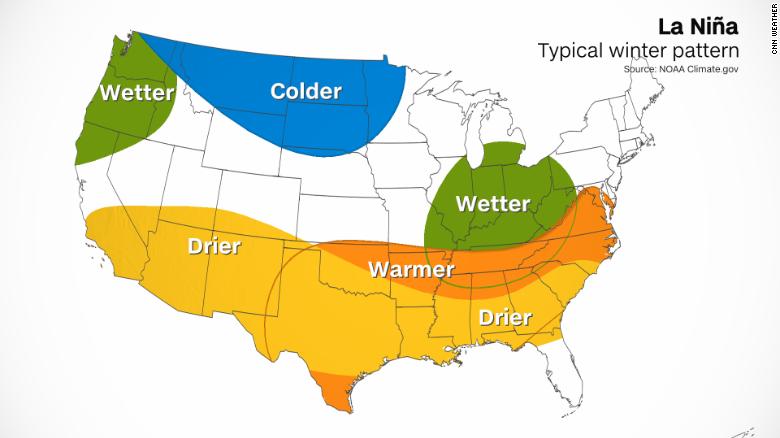 “La Niña is anticipated to affect temperature and precipitation across the United States during the upcoming months,” the center said as it issued a La Niña advisory Thursday, predicting conditions are present and expected to remain. California’s Alisal Fire threatens power outages, prompts evacuations and sparks concerns over Ronald Reagan’s Rancho del CieloThe advisory replaces the La Niña Watch, which indicated favorable conditions for development that had been in place since July.NOAA will release its winter outlook October 21, and the presence of La Niña is expected to weigh heavily in the forecast for the season. The prediction center put the odds near 90% that La Niña would be in place through the winter of 2021-2022.Both La Niña and El Niño occur every three to five years on average, according to NOAA.

La Niña and the climate crisis

While El Niño and La Niña events are regular aspects of global weather patterns, increased global temperatures may temper or change their effects.La Niña tends to pull down global temperatures, but in recent years, the planet has warmed so fast, it’s like hitting a small speed bump at 80 mph — it barely even registers.18 weather and climate disasters this year have killed over 500 people and cost over $100 billion in US

It’s likely too early to know how climate change will affect those patterns; research is beginning to show how a warming climate may amplify the effects of El Niño and La Niña. Climate change could increase the severity of weather events stemming from El Niño and La Niña patterns, according to a 2018 study on atmospheric conditions that ran simulations of climate conditions.Top spots on the warmest-years list used to be reserved for the strong El Niño years, but human influences have long since overwhelmed the planet’s natural temperature regulators. For instance, La Niña was present during parts of 2020, but the year still tied with 2016 (an El Niño year) as the hottest on record for the plane

La Niña is back. Here’s what that means ~ THE WASHINGTON POST

The atmospheric and oceanic pattern will have a bearing on the Western drought, the end of hurricane season and the forecast for winter and spring

By Matthew CappucciYesterday at 2:22 p.m. EDT

After a months-long period of relative atmospheric balance between El Niño and La Niña, the National Oceanic and Atmospheric Administration announced Thursday that La Niña has returned. It’s expected to stick around in some capacity through the winter and relax toward spring.

The intensifying La Niña should peak in magnitude, or strength, by the end of 2021, having bearings on the drought in the West, the end of hurricane season and the upcoming winter. La Niña also plays a role in shaping how tornado season pans out in the spring.

It’s one of many drivers in our atmosphere, but it is often among the most important given the extent to which it shuffles other atmospheric features key in determining how weather evolves over the Lower 48.

In brief, here are some of the key impacts La Niña could have in the coming months:

La Niña is the opposite of El Niño, which often makes headlines for spurring powerful southern storms that can generate beneficial rains in California and track across the entire nation. During La Niña, such winter storms tend to be less frequent.

About six weeks remain until the start of meteorological winter (Dec. 1), and forecasters are already looking ahead to what may be in store. There’s still a long way to go before the first flakes fly in most places, but some meteorologists are already tossing their hats in the ring, trying to broadly gauge what lurks ahead.

Want to get a morning briefing straight to your phone? Text JOIN to 63706 to sign up.

La Niña begins with a cooling of waters in the eastern tropical Pacific. The basin alternates between El Niño and La Niña every two to seven years on average. That pocket of cooler ocean water chills the air above it, inducing a broad sinking motion. It’s that subsidence, or downwelling of cool air, that topples the first atmospheric domino.

During La Niña winters, high pressure near the Aleutian chain shoves the polar jet stream north over Alaska, maintaining an active storm track there. The Last Frontier often ends up cooler than average. The confluence of the polar and Pacific jet streams, as shown in the image above, helps drag some of that cold air across the Pacific Northwest and adjacent parts of the northern Plains.

That keeps the northern United States anomalously wet, while the South is left largely warm and dry. This is bad news for California and other parts of the Southwest, which are enduring a historic drought. The persistence of warm, dry conditions would cause the drought to worsen and potentially prolong the fire season.

La Niña arrived in fall 2020 before fading away in May 2021. Neutral conditions, bridging the divide between La Niña and El Niño, prevailed through the early fall before the NOAA’s declaration of La Niña’s return Thursday.

La Niña tends to exert a slight cooling effect on global temperatures, but recent La Niña years are warmer than El Niño years were just a decade ago because of the warming influences of human-caused climate change. Even with La Niña influencing global temperatures, 2021 still has a greater than 99 percent chance to rank among the top 10 warmest years on record, according to the NOAA.