Reaching up to 160 feet (48.8 meters) tall and able to live for a millennium, the evergreen tree is a survivor from the Jurassic era, more than 145 million years ago.

Araucaria araucana outlasted the dinosaurs, but today scientific experts consider the tree endangered. Cultivated monkey puzzle trees grow in gardens and parks around the world, but in the wild the species only grows along the slopes of Patagonia’s volcanoes in Chile and Argentina.

Fires, land clearance, overgrazing and logging have shrunk the temperate forest where the monkey puzzle tree grows. Its large seeds are also a prized food source for an endemic species of bird, the austral parakeet.

The green-hued parrots, in flocks of about 15 birds, flit from tree to tree to find a good spot to fatten up for the winter. When the birds hit the jackpot, their numbers can swell to more than 100, and they gorge on monkey puzzle pine nuts. 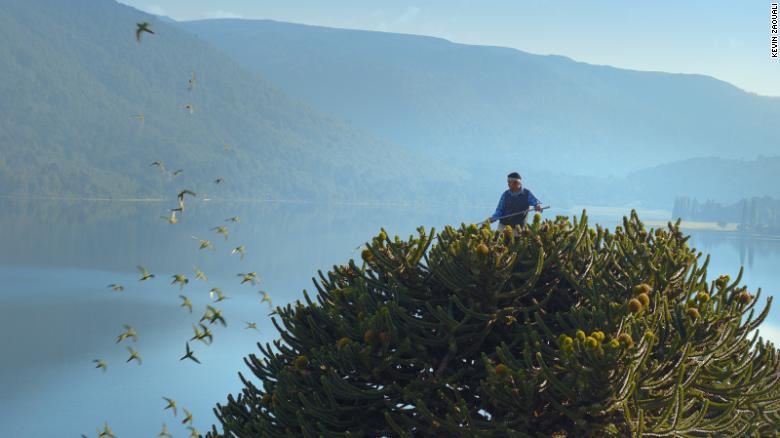 Edelmiro Pellao harvests seeds from the top of an Araucaria, or a monkey puzzle tree, in Comunidad Mapuche Ruca Choroi in Argentina.

The marauding parakeets, despite their bottomless appetite for the nuts, actually could be helping the monkey puzzle trees survive in Patagonia, recent research has found.

Scientists say the birds act as a buffer against the threat posed by human overharvesting of the nuts.

The parakeets typically take the pine nuts and consume them from a treetop perch dozens of feet away. Often, the birds only partially eat the seeds.

In fact, the partial removal of the seed coat by parakeets enhanced the germination speed of monkey puzzle seeds, according to the 2018 study.

“They (the parakeets) play an important role in the regeneration of the araucaria forests as the partially eaten seeds they leave on the ground are not selected by seed collectors, and they retain their germination potential,” explained two of the study authors, Gabriela Gleiser and Karina Speziale, researchers at Argentina’s Biodiversity and Environment Research Institute at the National University of Comahue.

What’s more, they said via email, the parakeets disperse the seeds, which means the trees regenerate further away from the mother plant.

Gleiser and Speziale are also investigating whether the parakeets, as they flap from branch to spiny branch, pollinate the female cones.

The parakeets aren’t the only residents who eat these nuts. They are also a traditional source of food for Chile’s and Argentina’s Indigenous Mapuche people, who skillfully climb the monumental trees to collect seeds and pound them into a flour that can be baked into bread. The nuts, which are larger than almonds, are also eaten more widely in the two countries, particularly Chile.

The Mapuche have the right to collect nuts in their ancestral area; however, beyond this, local authorities restrict the amount of nuts that can be collected for personal and commercial purposes and require a permit, Gleiser and Speziale said.

“Despite this, many illegal collectors exist who collect without respecting the collection limits,” the researchers added.

“Human seed collection represents an important threat to (the) monkey puzzle tree’s reproduction in those populations that are accessible for people, as illegal seed collectors almost deplete the seed pools produced by the trees.”

However, the nuts damaged by the parakeets are discarded by collectors, so the partially eaten nuts can still germinate.

The Mapuche lifestyle is interwoven with the monkey puzzle tree. However, it was a bond that was almost broken during colonial times and up to the 1990s, when industrial loggers stripped the land, including the Araucaria trees. Demanding legal protection for the species, the Mapuche clashed with loggers and the Chilean government. The monkey puzzle trees are now protected by law across Patagonia. 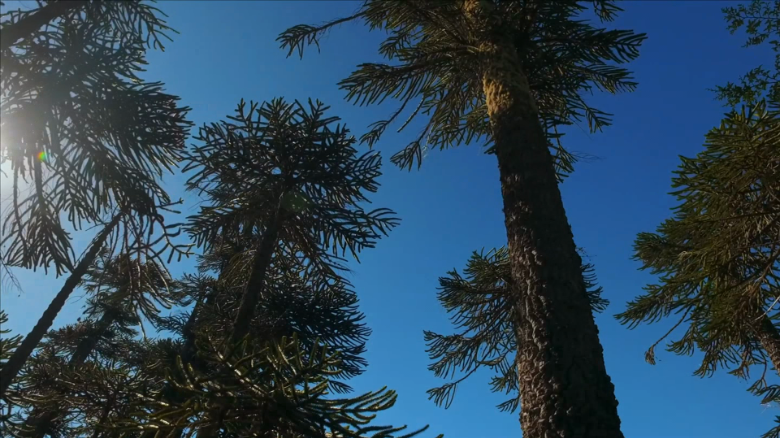 The monkey puzzle trees can grow to 160 feet tall and live for 1,000 years

“The Araucaria are just like the Mapuche people … even though they have been mistreated, beaten up, we all stay strong,” Petrona Pellao, a member of the Mapuche Indigenous group, said in the CNN docuseries “Patagonia: Life on the Edge of the World.”

The Mapuche are now replanting Araucaria trees and rediscovering their ancient ancestral practices. The goal is to help the Mapuche cultivate pine nuts sustainably and allow the Araucaria trees to thrive once again.