Too ‘bullheaded’ to take the vaccine

This is not a place that gets a lot of national news coverage. And it’s hard to break into socially. People take care of each other in times of joy and crisis, but newcomers could be there 10 years without really fitting in, Rodebush said. Jim RodebushThis meant just about everyone had seen our last story. Rodebush wanted us to talk about it with his buddy, Wayland Bland. He called him, and after a little convincing, Bland zoomed into the driveway in his pickup and called out to us to film the blue bandana on his face. He wanted us to film him saying, “I’m a Republican, and I’m wearing this mask.” Last fall, Bland spent seven days in the hospital with Covid-19. He’d had a kidney transplant, and knew he was high-risk. Last year, Rodebush said, “Me and him and Ruth sat here and talked about it, and they both said, ‘If we get it, we’ll die from it.'” But Bland lived.”What’d you tell ’em, that I’m the toughest bastard there ever was?” Bland said. It was exactly what his friend had said. “I was on everything they had — steroids, full drip, plasma from people that’d had Covid, drugs that they gave my President, (Donald) Trump. And they finally burned it out of me,” Bland said. But he would not get the vaccine. “I ain’t taking that sh*t. I ain’t taking it!” Bland said. He didn’t want to detail why until he was pushed to explain why he’d trust drugs like Regeneron’s antibody cocktail but not the vaccine. He turned to Rodebush and asked, “Am I going to have to tell her?” Rodebush laughed and shrugged. 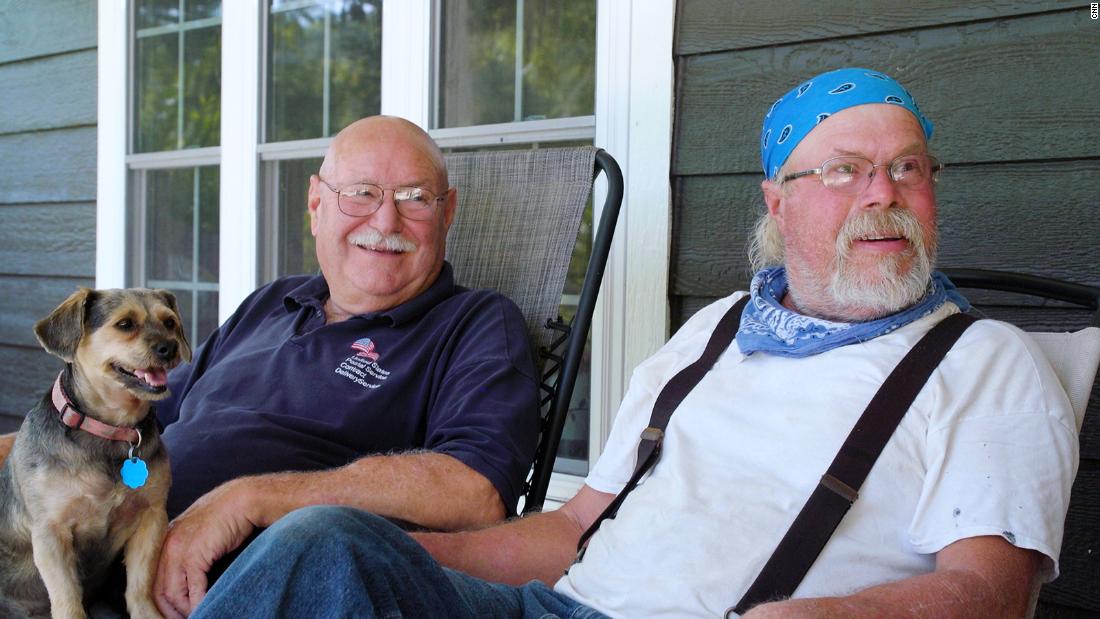 Rodebush’s friend Wayland Bland, right, survived Covid-19 in 2020 and wears a mask indoors. But he still won’t get vaccinated.

Trump urges Americans to get Covid-19 vaccine: ‘I would recommend it’“They shafted my President,” Bland said. He thought the vaccine was delayed intentionally to hurt Trump, a baseless claim. “They wouldn’t give it to him because they know damn good and well he’d be reelected, and there’d be nothing nobody could do. So, they had to swindle around and scheme around and keep it from him, and just as soon as the election was over, Bam! There we got it.””I’m so bullheaded. You shafted me out of my President. I ain’t taking your medicine,” he said. “I’ll take what they gave him, but I’m not taking yours.” When reminded Trump had actually urged people to get the vaccine, Bland said he hadn’t seen that. Indeed, Trump himself got the vaccine, and while he had teased there could be a shot by the 2020 election, vaccine developers and federal officials were always clear that the timeline depended on when the data came in. “I don’t watch the news because you’uns have all pissed me off so bad,” Bland said. Still, he was down to hang out with our CNN crew over a few beers on Rodebush’s front porch.